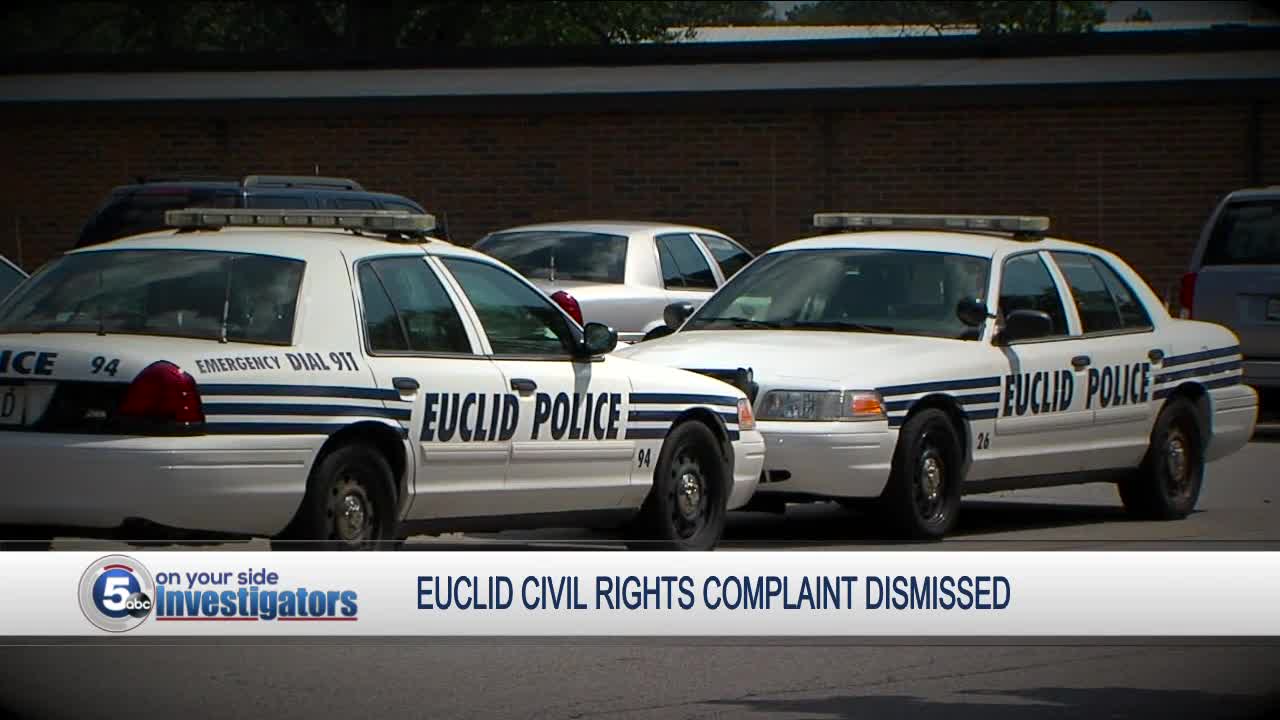 The Ohio Civil Rights Commission has dismissed a complaint filed by Euclid police officer after it determined it is "Not Probable" the City of Euclid and its police force engaged in racial discrimination.

EUCLID, Ohio — The Ohio Civil Rights Commission has dismissed a complaint filed by Euclid police officer after it determined it is "Not Probable" the City of Euclid and its police force engaged in racial discrimination.

In a Letter of Determination, the commission found the information gathered failed to support a recommendation Euclid police officer Shane Rivera was unlawfully discriminated against, that Rivera does not have a disability, and does not have a protected activity to support his charge of retaliation. The commission also found Rivera was not subjected to discipline, different terms and conditions or harassment.

Rivera filed the complaint in February alleging he is a "disabled Puerto Rican individual" who was subjected to discrimination, retaliation, "constant harassment" and "different terms and conditions" over his ancestry.

Among the accusations, Rivera alleged one of his supervisors referred to Puerto Ricans as "shipwrecked Mexicans" and that Rivera was repeatedly referred to as "Pepe."

Rivera also alleged his face was cut out of a photo and pasted onto a picture of Pedro, a Latino character from the film "Napoleon Dynamite."

He said his supervisor also "makes comments about my hearing aids if I did not hear what he said," and alleged he was removed from his beat and patrol without explanation.

A letter submitted by City of Euclid Law Director Kelley Sweeney paints a different portrait of Rivera's tenure at the department.

Sweeney wrote "there have been a number of issues with his performance" that led to the extension of his probationary period, a performance improvement plan and monthly evaluations since he was hired in 2013.

Our Emmy-award winning exclusive 5 On Your Side Investigation last fall revealed Rivera filed the second-highest number of of uses of force reports of any officer in the department.

Sweeney had no comment on the commission's determination. She confirmed Rivera is still on the force.

He sent us the following statement:

“It’s not at all uncommon for the OCRC to issue a determination of no probable cause and the Commission’s determination in this matter has no bearing on Officer Rivera’s ongoing lawsuit.”

Rivera has also filed a racial discrimination lawsuit in the Cuyahoga Court of Common Pleas. His case is still pending.