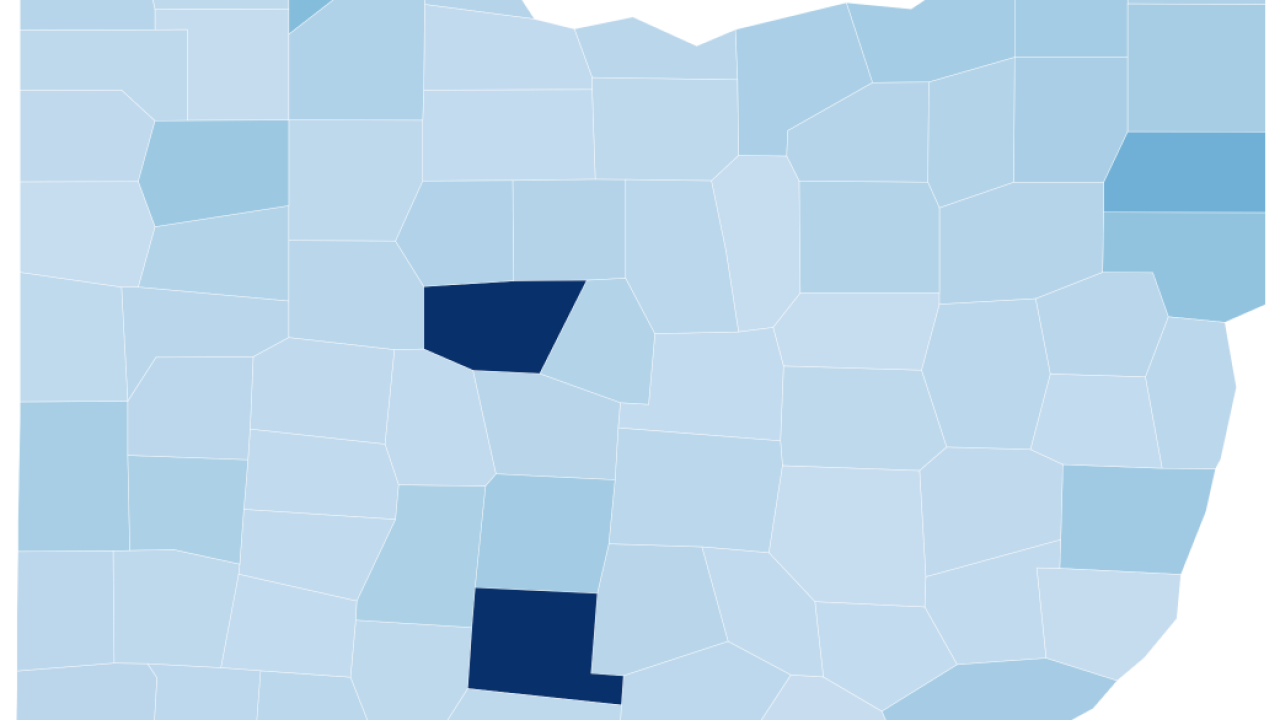 The Ohio Department of Health reported 444 new cases of COVID-19 Tuesday. For the first time, cases have now been detected in all 88 counties after three cases were reported in Vinton County, Ohio's smallest county.

According to a News 5 data analysis, the counties with the most cases often don't have the highest death rates.

Mouse over this map, which shows a breakdown of counties that have the most cases. As you can see, Cuyahoga, Franklin, Marion and Pickaway are in dark red, which means the most cumulative cases.

But when you break that case total down with population as an added variable, the situations in Marion and Pickaway become much more pronounced. In Marion County (dark blue) 33 people per thousand have tested positive for COVID-19. In Pickaway County (dark blue), the infection rate is nearly 30 cases per thousand after nearly 80% of inmates at Pickaway Correctional Institution tested positive for COVID-19. For comparison, the rate in Ohio's prison counties is much larger than Cuyahoga's 1.3 cases per thousand.

In recent days, Ohio's most populous county, Franklin County, has surpassed Cuyahoga County in total number of cases. Marion and Pickaway counties are still among the highest totals.

But what about deaths? Here is a look at the number of deaths per county. Cuyahoga reported 13 new deaths Tuesday for a total of 109. Mahoning County, 67 deaths, and Lucas County, 66 deaths, follow.

But when you adjust the death totals for population, Mahoning, Darke and Miami are the hardest hit. The map below shows that COVID-19 is far more deadly there than in more populous counties like Cuyahoga and Franklin counties, and counties with prisons like Marion and Pickaway, with a high case rate, but not a high death rate.

NOTE: Some of these interactive visualizations are updated daily with new data. If you are seeing this story more than 24 hours later, the graphics may not necessarily reflect the data from when this story was published.