A beloved migrant owl, the Northern Saw-whet, is making an appearance in Northeast Ohio 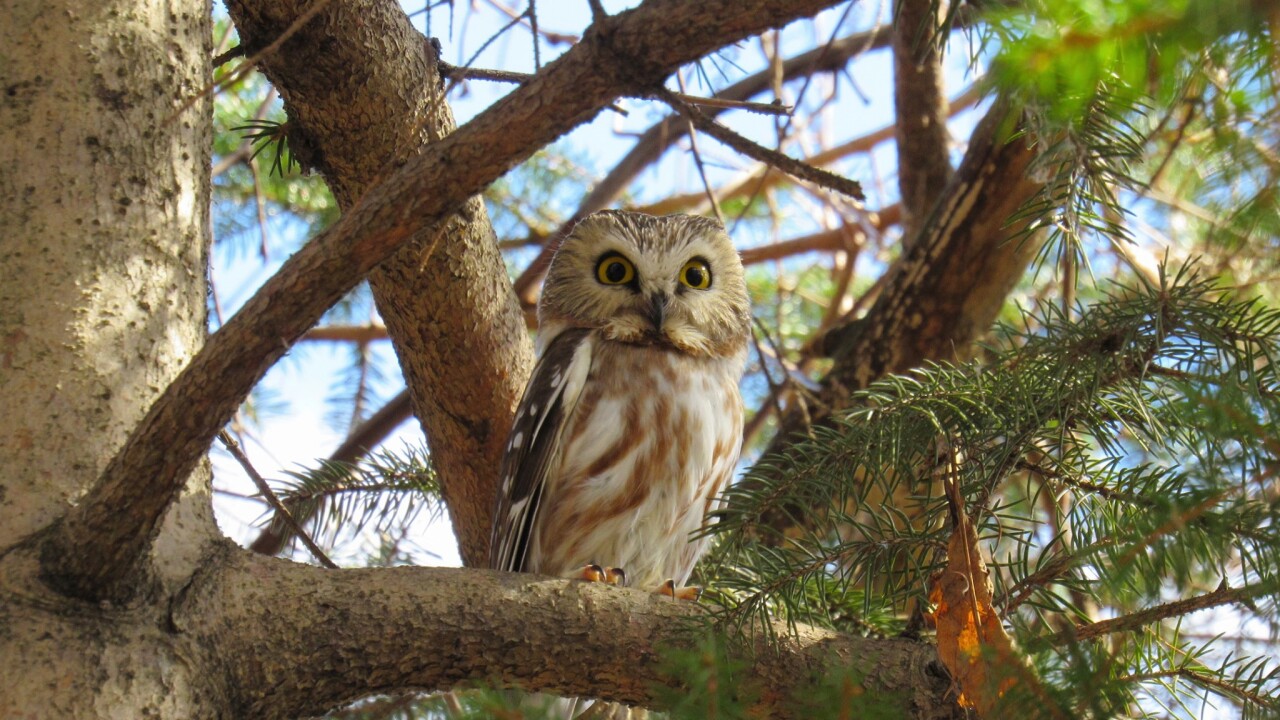 Courtesy of Jen Brumfield, Cleveland Metroparks.
Image of a Northern Saw-whet Owl taken in March 2018 at the Lakefront Nature Preserve.

CLEVELAND — A beloved migrant owl, the Northern Saw-whet Owl, is starting to make an appearance in Northeast Ohio. Each year, hundreds of these birds make their way over Lake Erie and to Cleveland during their southward journey to the Gulf Coast, Mexico and Central and South America. Most of them use places near the lake to rest before continuing their journey, which means you could spot one of these owls during the autumn months, if you're lucky.

Jen Brumfield, a naturalist for the Cleveland Metroparks, said hundreds of these tiny owls fly under the radar because they usually migrate at night. Neighborhoods along the lake are a special sanctuary for birds roosting before their journey south, and we're lucky to live in a location to witness these birds.

“Now through November, oftentimes you will see the Northern Saw-whet Owl appear in neighborhoods along the lake like Lakewood, Edgewater and Euclid. You will even hear stories of homeowners describing blue jays and other birds going nuts because there will be one of these owls just sitting on a shrub in someone’s backyard,” Brumfield said.

Brumfield says some people think that because of their size, these owls are just babies, but in fact they are full-grown adults.

Their catlike faces, over-sized heads and bright yellow eyes make them a sight to see, if you can spot them. Brumfield says if you want to see these owls, look closely in thick vine tangles and conifer trees where they prefer to sit silently in dense vegetation until nightfall.

They are highly nocturnal and eat small rodents and other small mammals.

While most migrate south to abandon the winter blues, some decide to to ride out the brunt of winter in Cleveland.

“They’re true Clevelanders,” Brumfield laughs."They even sport some orange for the Browns."

The brave ones who decide to stay are typically found at the Cleveland Lakefront Nature Preserve, where a no-mowing and no-dog policy at the preserve has helped the growth of native grasses, flowers and has become a home to the Northern Saw-whet Owl.

At the preserve, Brumfield said the best chance to see these adorable birds bursting with attitude is during the day when they are roosting and staying in one place, typically in the pine and fir trees scattered throughout the area. Another helpful tip is to pay attention to small songbirds—if they discover a roosting saw-whet, they're likely to cause a racket, calling the owl to move.

To get to the preserve, visitors can park at the lake front's Gordon Park and walk a small trail that connects to the Cleveland Lakefront Nature Preserve, where, over time, visitors have identified and spotted 280 species of birds, 42 species of butterflies and 26 Ohio plant species.

RELATED: US and Canada have lost 2.9 billion birds since 1970, study says