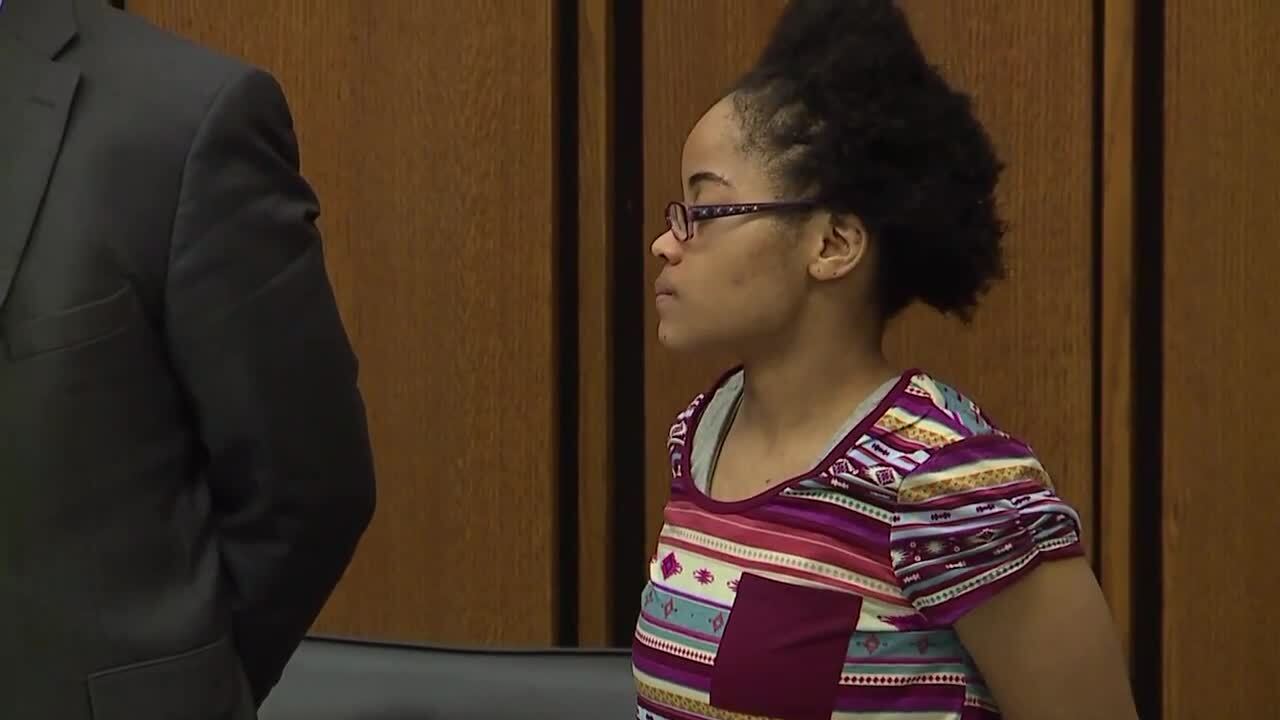 Sierra Day at the trial for the murder of her daughter.

CLEVELAND — Lifeless, cold and stiff, four-year-old Aniya Day-Garrett had a litany of injuries scattered across her tiny body, including bruises, abrasions, cuts and blisters, multiple Euclid police detectives testified Friday. The second day of the murder trial of Aniya’s mother, Sierra Day, and her mother’s boyfriend, Deonte Lewis, featured disturbing photos of Aniya’s injuries as well as evidence suggesting that Day and Lewis attempted to clean the crime scene before calling 911 to report Aniya wasn’t breathing.

In opening statements Thursday, assistant county prosecutor Anna Faraglia told the jury of 10 women and four men that the evidence will show Aniya suffered a long and prolonged death. On Friday, prosecutors began introducing that evidence.

“There is a deep bruise over her left eye. It was swollen shut,” said Euclid police Sgt. Craig Murowsky as he described photographs of Aniya’s body that were submitted into evidence. “There [are] multiple discolorations around her lower back area. There looks to be two parallel abrasions that appear to be later in the healing process in her lower back area.”

Another detective described the injuries as "very disturbing."

“There was a severe bruise to her left eye. She had what appeared to be burn marks or blisters on her legs. Very, very disturbing,” said Detective Michael Caruso.

Prosecutors also called to the witness stand two neighbors that lived near Sierra Day’s apartment at Cultural Gardens in Euclid. Both neighbors testified to seeing Lewis in and around Day’s apartment. Additionally, one witness testified to seeing Lewis alone with Aniya, which could dispute Lewis’ claim that he could not have killed Aniya because he wasn’t present for the abuse.

Prosecutors then called a registered nurse to testify. The nurse told the jury that Aniya had no cardiac activity when she arrived at the hospital on March 11, 2018. The nurse’s observations also suggest that Aniya was already dead by the time the girl arrived to the hospital.

“My observations were the little girl was skin and bones. Her eyes were wide open. Her mouth was open,” the nurse said. “Bruised. Fragile. Stiff. Cold.”

The nurse also told the jury that Aniya was fully clothed in winter garments, which disputes the initial statement that Day reportedly made to authorities. Day allegedly stated that Aniya got out of the tub and slipped while going to the bathroom and then had trouble breathing. Day also told authorities that she and Lewis gave Aniya some Tylenol. However, detectives said there was not any Tylenol in the apartment.

Detectives also testified that Day and Lewis were not emotional. Day’s family members, however, were hysterical upon learning Aniya had died.

“One of the family members began to act as if she was going to pass out. She began to hyperventilate,” said Detective Caruso.

Prosecutors then submitted several pieces of physical evidence that were collected from the apartment. Detective Phil Tschetter of the Euclid Police Department drafted and executed the search warrant that was served on Day’s apartment in the initial stages of the investigation.

“The apartment itself was very, very clean,” Detective Tschetter said.

Det. Tschetter said he noticed several different types of household cleaners on a counter. He also told the jury that some of the towels in the bathroom were wet. That suggests that Day and Lewis attempted to clean the crime scene prior to calling police to report Aniya wasn’t breathing.

“I mean [the apartment] was practically immaculate. It was very very tidy. Neat,” Det. Tschetter said. “There was no disarray of any kind… The apartment smelled strongly of bleach.”

Under cross examination, Det. Tschetter said he did not know what kind of cleaner was used nor did he know when it was used.