After his market was vandalized and robbed over the weekend, the owner of a Solon business is turning a negative situation into a positive experience for the community.

Taylor Steinhoff, the owner of The Butcher's Pantry, 33475 Station Street in Solon, thought his day would start off as it usually does. Coming back from a busy weekend with his children in tow, Steinhoff returned to open up his shop early Monday morning.

His 4-year-old and 5-year-old daughters raced to the back door of the shop to open it up— a routine that has become a fun, competitive tradition.

"They ran outside and said 'Daddy your store is dirty,'" said Steinhoff, who at the time just thought he needed to do good a sweeping of the place.

He walked in and made a shocking discovery.

It was at that moment he realized something wasn’t right. He looked down on the ground and saw the cash box busted open on the ground.

Steinhoff said it was tough to explain what happened to his young kids as they questioned what stealing was and why police cars were in his parking lot.

The burglars entered through the back door and ripped down the box where the internet and phone lines were stored. The burglars even went as far as spraying his entire shop with a fire extinguisher— a move police said criminals use to hide their fingerprints.

If they just took the cash drawer, Steinhoff said he would have been opened sooner, but the burglars didn’t stop at just taking the cash. They trashed his office, poured soap throughout his shop and cut off the power, which left around 2,500 pounds of food spoiled. 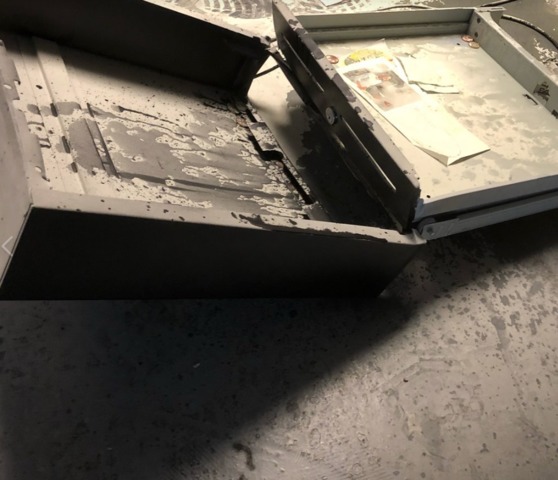 The vandals took money in the cash box. Steinhoff is still doing an inventory of his losses but says it's not enough to get a felony over.

Steinhoff said he doesn’t want to dwell on a situation but rather wants to turn the situation into a positive one to help the community. That's why he is having a special menu on Friday with 10 percent of every sandwich going to help Lutheran Metropolitan Ministries. It’s an organization that empowers forgotten people in Cleveland by giving them meaningful employment through food.

“We don’t want the vibe to be sad. We want to get back to doing what we love to do which is serving people good food and making people happy,” said Steinhoff, who worked hard for three years to open up his business.

After several days of cleaning up, The Butcher's Pantry will reopen to the public on Thursday.