You asked. We answered.

The conversation started on Reddit. Curious citizens wanted to know the source of the purple or magenta light spotted by drivers on Interstate 77 southbound, Interstate 490 and East 55th Street. Others weighed in, giving their opinions about the source of the strange magenta aura in the sky. 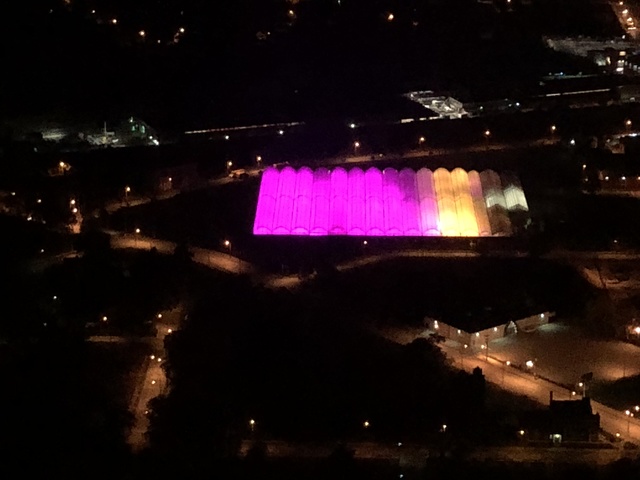 From above: News 5 Airtracker over the greenhouse that can be seen from the sky when the lights turn on at 4 a.m. every day. Photo by: Jon Rudder.

The magenta light can be seen during the early morning hours throughout the week from various locations throughout Cleveland. It's not a UFO or a spaceship. It's not a rare sunrise. And it's definitely not the Northern Lights. (At this time of year? At this time of day? In this part of the country? Localized entirely within Cleveland?)

We did a little digging and found out the purple light is from a greenhouse that is contributing to urban farming all year round in Cleveland.

Installed nearly six years ago on a parcel of land that was burdened with 40 abandoned homes and factories, Green City Growers acquired the land and turned it into something for a neighborhood hit hard with lack of employment and slow growth in development.

Jeremy Lisy, general manager of Green City Growers who oversees the greenhouse, said the magenta light is a result of a recent switch about four months ago from the energy exhaustive metal halide and high-pressure sodium lamps to energy-efficient LED lamps.

"We have thousands of LED lights. When we first installed the greenhouse about six years ago, LED lights were not where it was at," said Lisy. "Now they are more affordable and eco-friendly."

For residents who have the pleasure of having an early commute to work, chances are you may have seen the aura of purple light coming from the greenhouse as it turns on at about 4 a.m., according to Lisy.

Inside the massive 3 1/4 acre greenhouse is butter lettuce, basil and living mixed greens sold to local restaurants. The LED lights are not only energy-efficient, but unlike traditional greenhouse lamps, they can be turned into specific wavelengths. In the case at Green City Growers, the purple lights are more easily absorbed during the plants' photosynthesis process. The pigments in their leaves help catch these specific wavelengths, whether it's magenta, orange or red.

The plants growing inside the greenhouse that provide fresh veggies to Cleveland residents all year round. Photo courtesy of Green City Growers.

"These LED lights help the plants grow healthier and faster. For example with traditional lighting, it would take about 30-35 days to harvest basil, but with LED lights that time is reduced down to around 28 days," Lisy said.

At the greenhouse, they can change the LED lights to resemble the ROYGBIV color spectrum. Lisy said the LEDs emulate the light spectrum of the sun.

The greenhouse employs 40 people who, after one year, can join the co-op. This year, Lisy said the greenhouse will break even and next year will be its first profitable year where those in the co-op will get 90 percent of the profits.

"We want to change the way business is structured. Why is it that the owner makes all the money? Why can't everyone be part of the goal? Lisy said.