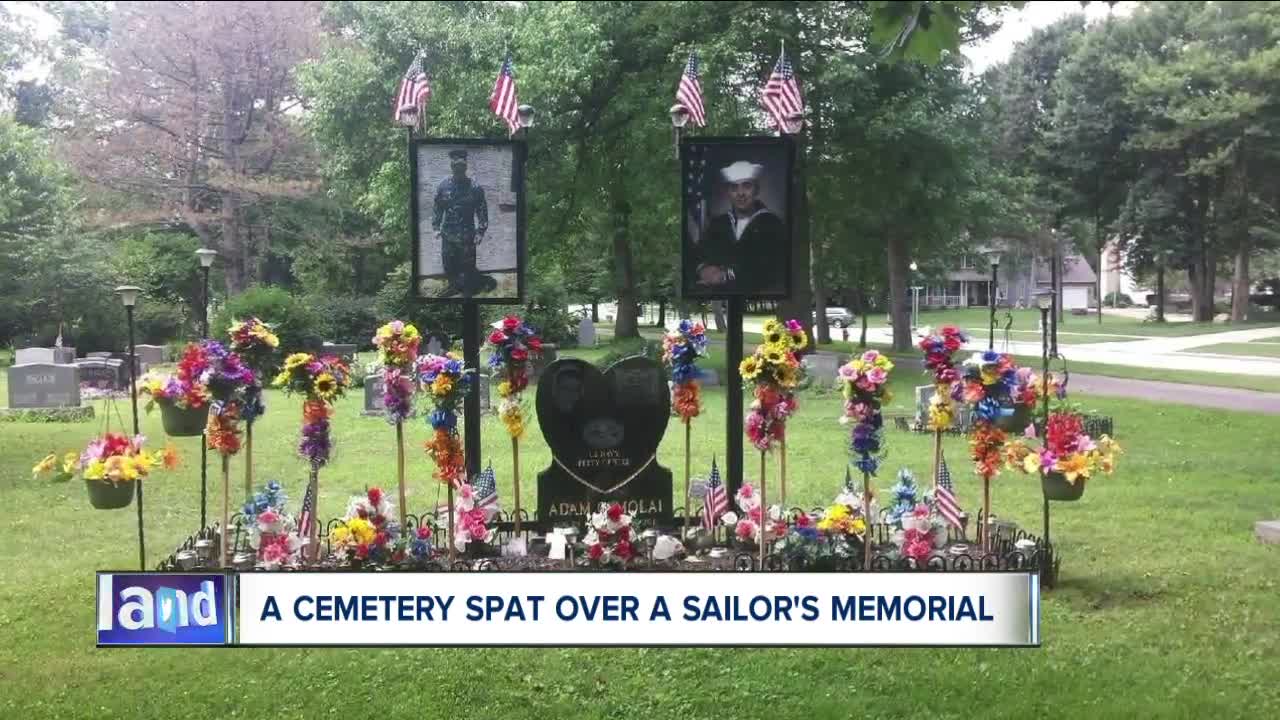 In the latest salvo in a years-long legal battle over a father’s graveside memorial to his son, staff at Standing Rock Cemetery in Kent cut down two large poles this week that featured pictures of the young man. 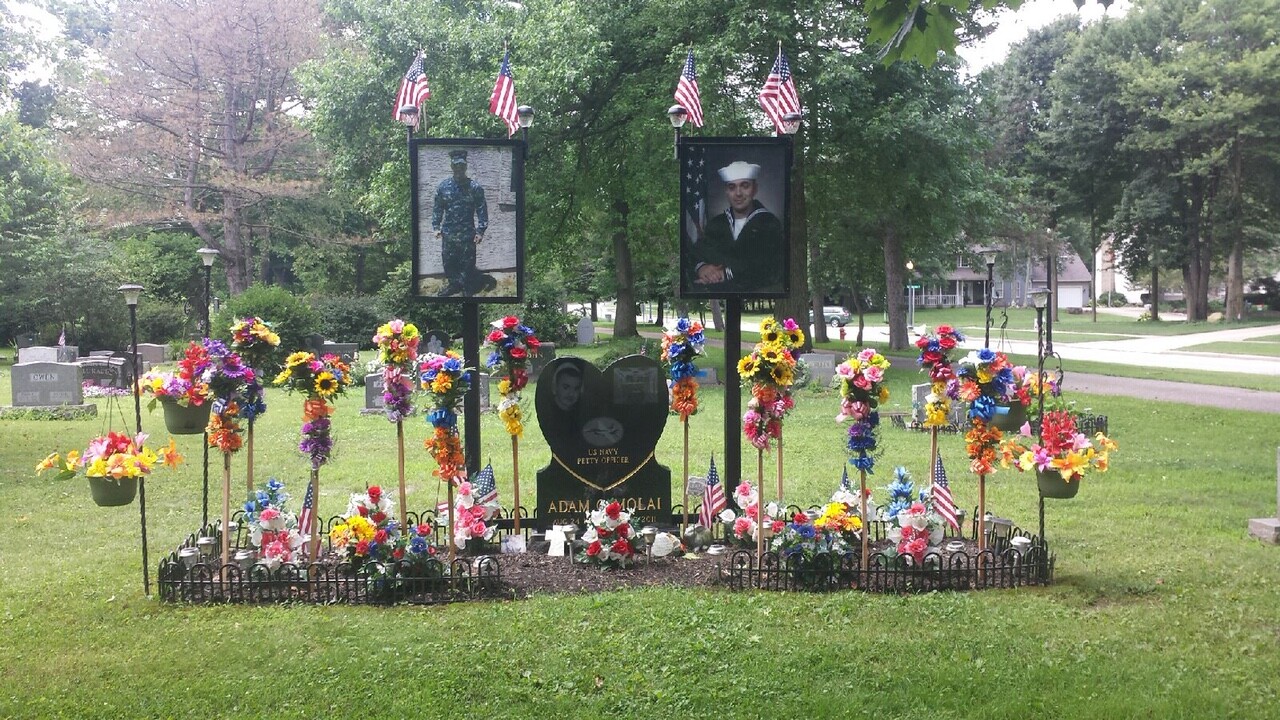 KENT, Ohio — In the latest salvo in a years-long legal battle over a father’s graveside memorial to his son, staff at Standing Rock Cemetery in Kent cut down two large poles this week that featured pictures of the young man. Fred Molai, whose son Adam — a petty officer in the Navy — died in 2011 after a rafting accident in California, staunchly believes the memorial he erected doesn’t interfere with the sanctity of the hallowed ground and may seek additional legal action.

On Wednesday, cemetery staff appeared to have used a saw to cut down two wooden poles that were installed with a custom-made bracket that was welded onto the back of Adam’s headstone. Cemetery officials said cutting down the poles became the only option after Molai had steel plates welded onto the bolts in the bracket. Molai and his attorney both said they were not notified that the poles were going to be removed until after the fact.

“They never called me and said, ‘come here and take this down or we will take it down,’” Molai said. “I never had that chance.”

The city-owned cemetery’s clerk treasurer, Jean Crest, said cemetery staff was authorized by the City of Kent’s law department and director Hope Jones to remove the poles. Jones did not respond to a call requesting comment Friday afternoon. Crest also said staff was simply following the trial court judge’s order, which was later affirmed by the Ohio Court of Appeals, requiring that the poles be removed. The Court of Appeals ruling in May followed a five-year legal challenge that centered around a central question: when it comes to displays of grief, how far is too far?

After failing to reach an agreement on the extent of the display, Molai and the City of Kent entered into litigation in 2013. The city argued that Molai’s memorial was in violation of the cemetery’s rules and regulations because the poles failed to conform to the general appearance of the cemetery. Cemetery staff noted that no other burial plot in the large cemetery had a display that resembled Molai’s memorial. Cemetery staff also claimed Molai refused to compromise with them regarding the height of the poles.

The trial court judge’s ruling, which was later affirmed by the appellate court, determined that Molai was in violation of the cemetery’s regulations because he was unauthorized to ‘excavate’ and install the poles in the ground. Furthermore, the judge determined that the memorial failed to conform to the general appearance of the cemetery. The trial court also determined Molai’s elaborate floral arrangements and small fence were permissible.

As he felt then — and how he continues to feel now — Molai said his way of paying respects to his son has never once been disrespectful to other families who are interred at the cemetery.

“What I have done here is not interfering with anybody. It’s not harming anybody. The fact of the matter is that [cemetery staff] here, they’ve been after me to get these posters down for the past six years. They just don’t like what I’ve done,” Molai said. “A trustee calls this gaudy. Maybe to him it's gaudy, but it’s not to me.”

“That’s really what this is about. This is gaudy, right? It’s gaudy?” Molai’s attorney asked the former clerk treasurer.

“No. It was — it’s about things were placed in the gravesite that is [sic] not intended to have people buried in them and it didn’t go through the superintendent and we don’t approve of it,” the former clerk treasurer responded.

Nevertheless, the court ruled that the poles and posters needed to come down. After the ruling, Molai said he had them removed. However, on the advice of his attorney, Molai said he had the company that made his son’s headstone come and weld a U-shape bracket onto the back of the marker. The bracket would allow the poles to be secure without planting them in the ground and ‘excavating’ near the burial plot.

Citing the court ruling that the poles still failed to conform to the general appearance of the cemetery, staff cut the poles down Wednesday. Molai and his attorney both said they were never apprised by the city’s law department that the poles were going to be forcibly removed until they were already cut down. The poles and pictures were securely stored in the cemetery’s shed until Molai came to pick them up. However, Molai said while cemetery staff was removing the poles, they inadvertently nearly cut in half one of the decorative American flags that adorn Adam’s gravesite. It was like gasoline thrown on a fire, Molai said.

Molai said he is considering taking additional legal action against the city and the cemetery.