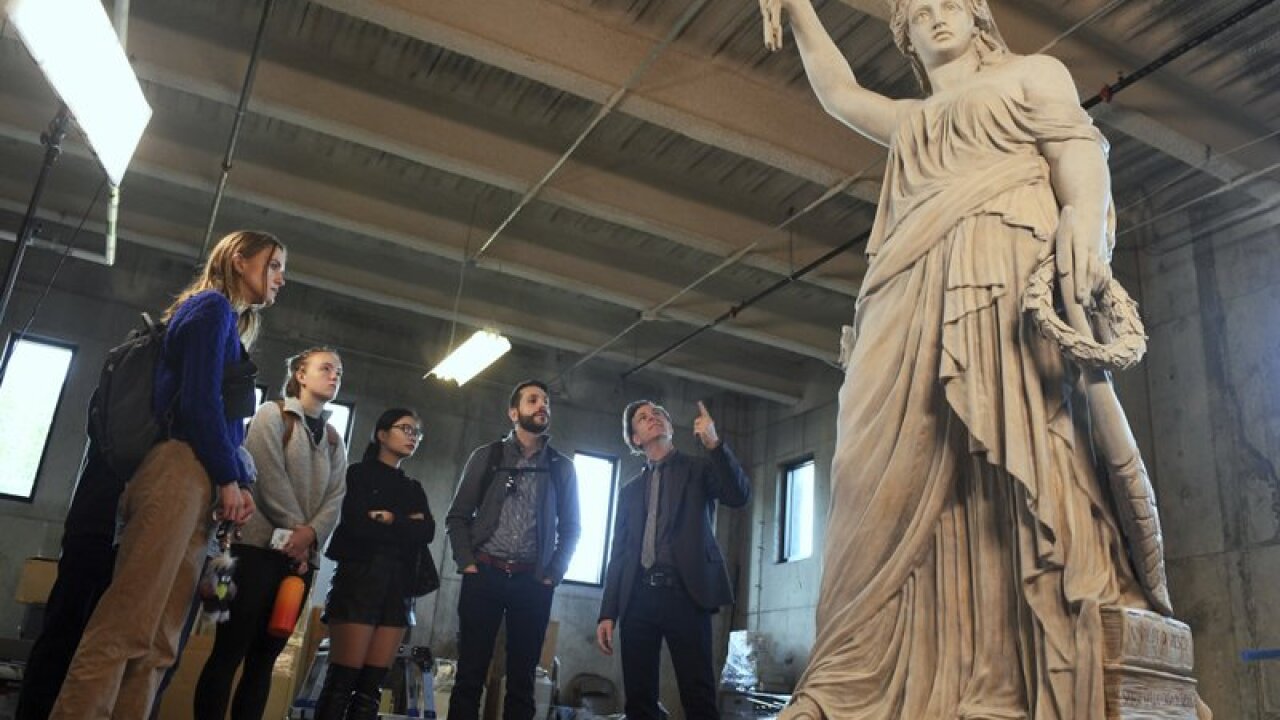 On Oct. 17, the Ellis Island National Museum of Immigration in New York will celebrate the opening of its latest exhibit “Sisters in Liberty: From Florence, Italy to New York New York,” a collaboration between the university and the Opera di Santa Croce, a nonprofit organization in charge of the Franciscan Cathedral Santa Croce that serves as the resting place of Michelangelo, Galileo and Machiavelli. Through art and a multimedia experience created by the university, the exhibit is intended to spark an international conversation about the meaning of liberty and how the concept of liberty has evolved.

“What we wanted to do with the Santa Croce team was to think about how we could bring the conversation into today’s culture. We think about the 50th commemoration of May 4 and the lead up to the presidential election. How do we take this historical understanding of liberty and this partnership between Italy and the U.S. to create an international conversation about liberty today?” said J.R. Campbell, director of Kent’s Design Innovation Initiative who led the project with James Blank, dean of the College of Arts and Sciences and David Hassler, director of the Wick Poetry Center.

The exhibit will feature an 80% to scale replica of Pio Fedi’s “Liberty of Poetry” that is housed at the church and is said to have served as the basis for the Statue of Liberty. The statue honors Giovanni Battista Niccolini, a poet who inspired and supported the Risorgimento, the Italian struggle for self-determination.

With permission from the Vatican, Kent neuroscientist Robert Clements and Josh Talbott, both of whom have a background in 3-D imaging, traveled to Florence to 3-D scan the statue over a three-day period using technology from Exact Metrology. They then returned to Kent to process 30 to 40 gigabytes of data and create a blueprint for a 3-D printer.

Freshmade3D, a Youngstown-based start-up company, printed the replica in three sections, so that the statue could be transported easily to New York and also fit in Ellis Island’s small elevators and narrow corridors. Tamara Honesty, an assistant professor of scenic design, and a team of students painted the statue, which is made of a combination of sand and resin, to make it look like the original.

The exhibit also features the Wick Poetry Center’s “listening wall,” an interactive screen where people can listen to and review documents from the Library of Congress focused on the ever-evolving interpretation of liberty and create and record their own interpretations. Wick originally intended the listening wall to be used for the May 4 commemoration and won a $50,000 grant from the Knight Prototype fund to create it, Hassler said.

Additional listening walls will be stationed at Kent’s Integrated Sciences Building and at the Cathedral Santa Croce. User-generated content will be automatically synced between the three listening walls, allowing Kent residents to view and listen to international input.

“Now people around the world can speak to what they consider to be liberty and how they respond to these texts and documents, which I think is a really amazing thing,” said Jessica Jewell, Wick program director.

The “Liberty of Poetry” replica will be on display in New York through April 26, 2020, at which point it will return to Kent State’s Integrated Sciences Building just in time for the 50th anniversary of May 4, a mere coincidence, Blank said. Following the 50th commemoration, it will find a permanent home at the Design Innovation Hub.

“The timing is everything. It’s like somebody wrote the script and we just walked into it,” Blank said.

“Modern technologies have been used and created for looking at CT scans or teaching students how to look at chemical molecules, but they can also be applied to bringing art to the world from a sacred place on earth where the Renaissance began and where people were talking about democracy and self determination.”