The Summit County Medical Examiner's Office and Akron police have found human remains in a fire pit behind the Akron home of a missing woman.

The Summit County Medical Examiner's Office and Akron police have found human remains in a fire pit behind the Akron home of 53-year-old missing woman.

On Friday morning, the medical examiner resumed the search for the second day in a row behind a home in the 600 block of Crouse Street. That's when they confirmed a gruesome discovery first made Thursday evening by a family member of the missing woman.

Authorities began their search Thursday night after being tipped off about possible human remains.

Investigators could be seen on Friday morning looking around a backyard and a fire pit at the home on Crouse Street. Anthropologists, along with a forensic scene recovery team from Mercyhurst University, were called to methodically dig up and document the remains that were buried.

Charles Long, who works across the street, was saddened by what appeared to be an intense, taped-off crime scene.

"It startled us. At first, we couldn't believe it," Long said. "It's shocking that it's right here. It's amazing to us that it would be this close to home."

The digging took place at the home of Robin Freitag. Her family reported her missing on Sept. 5, stating that no one had heard from Freitag in more than a month. Her missing person posters can be seen plastered across her front door and on nearby telephone poles. 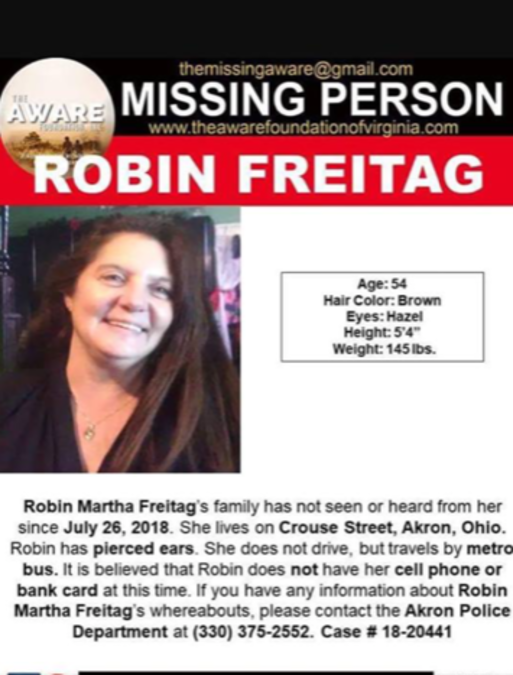 Police said her disappearance was already on their radar. Officers did several welfare check at her home, but nobody was inside.

"We came out. We've checked the property on more than one occasion prior to the report being taken," said Lt. Rick Edwards with Akron police. "We've had calls from doctor's offices to say she didn't show up for her appointment."

Nothing suspicious was found at the house until a family member searching the backyard Thursday found a body in the fire pit. Police are not following any other leads in Robin's whereabouts, but it's too early to tell if the unearthed remains are hers.

By the mid-afternoon Friday, the remains were transported to the Summit County Medical Examiner's Office. Police have not yet named any suspects, but they're treating the case as a homicide.

"Well of course, we're gonna treat it as a suspicious death, potential homicide at this point, but until we have a chance to really examine the remains, we don't know exactly what we're dealing with," Lt. Edwards said.

Investigators say it could take days before the remains are positively identified - even weeks - if DNA testing is needed.