The government just shut down. What happens next? 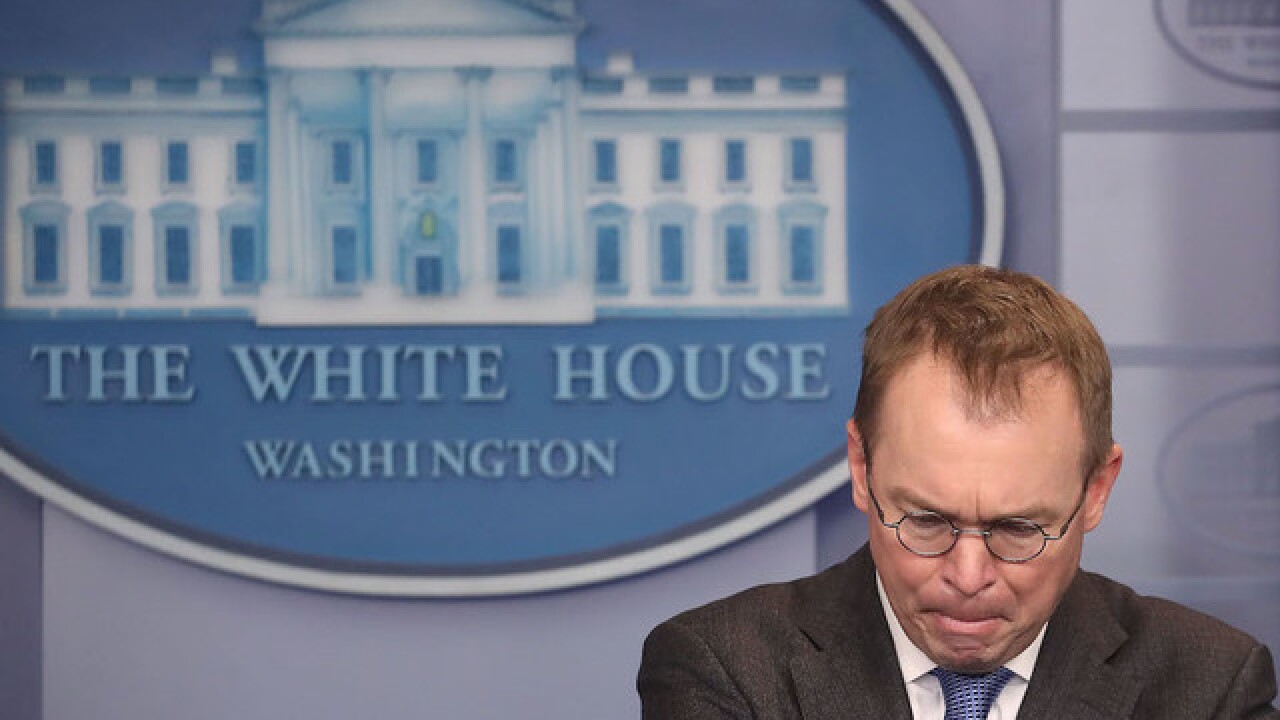 Copyright Getty Images
Mark Wilson
<p>WASHINGTON, DC - JANUARY 19: Mick Mulvaney, Director of the Office of Management and Budget, speaks to reporters about the possibility of a government shutdown at midnight tonight, January 19, 2018 in Washington, DC. Senate Republicans and Democrats are blaming each other for the looming shutdown. (Photo by Mark Wilson/Getty Images)</p>

In the final moments leading up to Friday's midnight deadline, Senate Republicans and Democrats were unable to agree on a stopgap funding measure to continue government services.

So what happens next? Here's a rundown of what will happen if the government remains shut down.

Thousands of federal employees will be placed on furlough -- meaning they won't report to work Monday. Whoever works for agencies and departments that are considered nonessential, including agencies that pay out small business loans and process passport requests, will cease to work effective immediately until Congress is able to agree on a bill for the federal budget.

The employees in these departments would be placed on "furlough." In previous shutdowns, everyone who stayed home was paid retroactively after an agreement was reached in Washington.

At the peak of the 2013 government shutdown, about 850,000 employees were furloughed per day, according to the Office of Management and Budget.

The White House said Friday that 1,056 members of the Executive Office of the President would be furloughed, and 659, considered essential, would continue to report to work.

Furloughed staff will still be expected to report to duty on Monday, the White House said in a contingency plan posted to its website Friday. But they can stay for no longer than four hours to engage in "shutdown activities" like setting out-of-office messages or explaining how to carry out functions to colleagues who are not furloughed.

The military is considered essential and will still report for duty. However, the troops -- including those in combat -- will potentially not be paid during a shutdown.

If the shutdown goes on for weeks, about 1.3 million active-duty military will be expected to work potentially without pay. The military is currently paid through February 1.

In addition, many civilian Department of Defense employees will not be working during the shutdown, including instructors at military academies and maintenance contractors.

"All employees with the Special Counsel's Office are considered exempt and would continue their operations in the case of a lapse in appropriations," the spokesperson said.

If you had plans for a vacation to visit any national parks, zoos or museums, some of those may be closed.

The popular panda cameras at the Smithsonian's National Zoo in Washington will be turned off, according to a statement from the Smithsonian Institution. Visitors will still be able to visit the National Zoo, as well as Smithsonian museums, over the weekend. But the zoo and the museums would be closed beginning Monday.

The shutdown will also affect the Bureau of Alcohol, Tobacco, Firearms and Explosives, meaning if you wanted a gun permit, you'll have to wait until the shutdown is over.

Essential services, such as Social Security, air traffic control and the Transportation Security Administration, will continue to be funded even if some employees of those agencies are not.

The US Postal Service won't stop serving residents -- you'll still get your mail.

In 2013, the shutdown especially affected residents of Washington. But this time around, Mayor Muriel Bowser vowed that services in the city will continue, unlike last time.

"Washington, DC, is open," Bowser said in a statement published Friday. "DC government will continue to provide services to our residents, the services they expect and deserve, uninterrupted."

"I've called on my agencies, where we are able, to step in for the federal government," she said during the news conference. "The National Mall is operated by the National Park Service, and there are many other National Service Park properties throughout Washington, DC ... we will step in and ensure litter and trash are picked up along the National Mall to keep nation's front yard clean of debris."