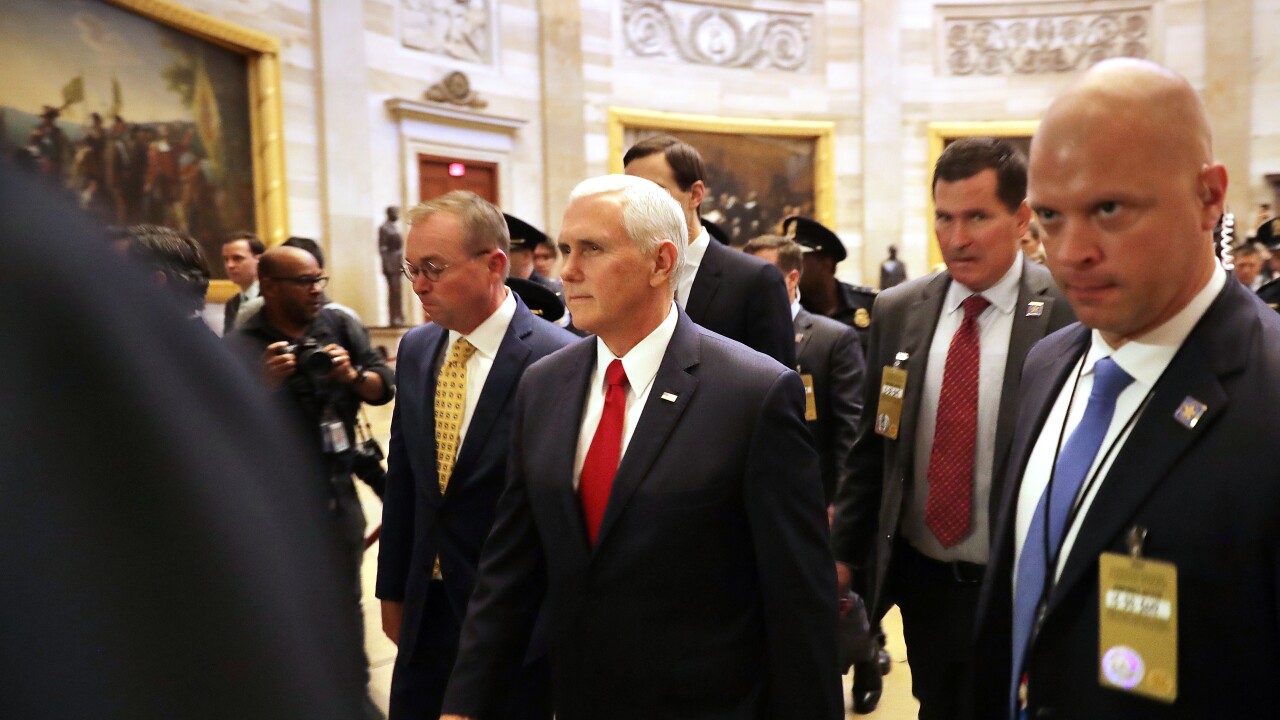 Chip Somodevilla/Getty Images
WASHINGTON, DC - DECEMBER 21: Acting White House Chief of Staff Mick Mulvaney and Vice President Mike Pence walk from the House of Representatives to the Senate while negotiating with lawmakers at the U.S. Capitol December 21, 2018 in Washington, DC. The U.S. Senate is considering a budget bill passed Thursday by the House of Representatives that would fund the federal government and includes more than $500 million for a wall along the U.S.-Mexico border. The Senate is unlikely to pass the bill with the wall funding, moving the government closer to a partial shut down just days before the Christmas holiday. (Photo by Chip Somodevilla/Getty Images)

Pence's vote advanced the 47-47 tally Friday after a marathon, five-hour voting session in the Senate that dragged on as senators rushed back to Washington.

The move doesn't immediately end the threat of a partial federal shutdown at midnight Friday. But it kick-starts negotiations as Congress tries to find a resolution to Trump's demand for the wall.

Senators say they won't vote on a final bill to fund the government until Trump and congressional leaders all agree to a deal.

The threat of a partial government shutdown may be keeping President Donald Trump at the White House, but his wife has left the building.

Stephanie Grisham, the spokeswoman for first lady Melania Trump, says it's the family's longtime tradition to spend Christmas at their waterfront Mar-a-Lago estate. Grisham says the first lady didn't change her plans to travel to Florida on Friday with their son, 12-year-old Barron, during his winter break from school.

The president had planned to join his wife and son. But the White House said Trump would stay in Washington if parts of the government are forced to shut down at midnight Friday.

Trump and congressional leaders are in a stalemate over his demand for $5 billion to build a wall on the U.S.-Mexico border.

Vice President Mike Pence is making the rounds on Capitol Hill ahead of a midnight deadline to avert a partial government shutdown.

Schumer reminded them that any proposal with wall funding will not pass the Senate, a spokesman for the senator said. Schumer also said two proposals that Democrats offered Trump last week remain on the table. A third offer is the package the Senate approved this week. All three continue funding for border security at current levels, $1.3 billion, without wall funds.

The spokesman for Schumer was not authorized to speak publicly about the meeting.

Parts of the government will shut down late Friday without a deal.

Vice President Mike Pence has arrived at the Capitol in case he is needed to break a tie on a procedural measure to avert a partial government shutdown.

The Senate has been stuck in a holding pattern as senators slowly return to the Capitol from out of town.

A Senate vote began about 12:30 p.m. Eastern time and was still open more than three hours later, with a partial tally of 46 against and 44 in favor. The measure would allow the Senate to take up a House-passed bill that would pay for President Donald Trump's border wall and avert a partial shutdown at midnight.

Two senators, Republican Jim Risch of Idaho and Democrat Jon Tester of Montana, flew in on the same plane and voted on opposite sides — Risch in favor, Tester against.

It's the "Senate Cranky Coalition."

McConnell was exiting the Senate chamber flocked by reporters with questions about the standoff.

The usually stone-faced McConnell paused. He asked an aide for the button.

"This is the largest part of my conference right now," he chuckled, showing the cartoon-style moose and the slogan.

He said it's "the unanimous position of the Senate Republican conference at the moment."

Senators were recalled back to Washington to vote on a package that includes Trump's border wall money, but it was expected to fail ahead of Friday's deadline to fund the government or risk a shutdown

President Donald Trump says the government is "totally prepared for a very long shutdown" as he digs in his heels over border wall money and tries to lay the blame on Democrats.

Trump just last week said that he'd "own" the partial government shutdown that will begin Friday at midnight if a deal isn't reached.

Trump has now changed his tune, saying at a bill signing Friday that it's "totally up to the Democrats as to whether or not we have a shutdown."

Trump, who was supposed to leave Washington on Friday to spend the holiday in Florida, says he thinks the chances "are probably very good" that a shutdown will happen.

He adds: "I hope we won't. But we're totally prepared for a very long shutdown."

The Senate has begun a procedural vote to take up a House-passed bill that would pay for President Donald Trump's border wall and avert a partial government shutdown.

McConnell says the bill is neither "radical" nor difficult to explain. Instead he said it addresses a crisis at the border that includes illegal drug smuggling and increased apprehensions of people trying to cross illegally into the U.S. from Mexico.

McConnell, who met with Trump Friday at the White House, said in a Senate speech that "this legislation would be quite uncontroversial in a more normal political moment."

He blamed "far-left" Democrats for opposing the spending package approved by House Republicans and supported by Trump.

Trump says McConnell should seek a rule change that lowers the threshold for ending Senate debate on legislation from 60 votes in the 100-member Senate to 51. A simple majority is currently used for judicial and executive nominations but does not apply to most legislation.

Trump tweets that McConnell should "use the Nuclear Option and get it done! Our Country is counting on you!"

McConnell has previously resisted Trump's calls for a rule change, and a spokesman is reiterating McConnell's opposition.

President Donald Trump is meeting with Republican senators as a midnight deadline approaches to avoid a partial government shutdown.

Among the senators who have gone to the White House are Majority Leader Mitch McConnell and Richard Shelby, chairman of the Senate Appropriations Committee.

The goal is to try to resolve a standoff that threatens to shut down about 25 percent of the government.

Trump has tweeted that a government closure could drag on "for a very long time" and he's trying to blame congressional Democrats if no deal is reached on his demand for $5 billion for a border wall with Mexico.

President Donald Trump is saying that if Senate Democrats don't go along with his demand for border wall money, "there will be a shutdown that will last for a very long time."

And the White House is encouraging the Senate's Republican leader to change the chamber's rules in order to pass a government spending bill that includes billions for Trump's long-sought wall along the U.S.-Mexico border.

Press secretary Sarah Sanders says Trump would "love" for Senate Majority Leader Mitch McConnell to lower the Senate's threshold for ending debate on legislation from 60 votes to 51, as it currently stands for judicial appointments.

Trump, in a tweet aimed at McConnell, says: "Mitch, use the Nuclear Option and get it done! Our Country is counting on you!"

A week ago, President Donald Trump said he'd be "proud" to shut down the government if Congress, led by fellow Republicans, didn't give him the money he wanted for his long-promised border wall with Mexico.

Now, the government is heading toward a partial shutdown if a spending impasse isn't settled by midnight. And Trump is saying that if enough Senate Democrats don't go along with a House-passed plan that includes the border money, then it'll be a "Democrat Shutdown!"

And Trump is tweeting that the Senate's Republican leader, Mitch McConnell, "should fight for the Wall and Border Security as hard as he fought for anything."

But as it's shaping up, the plan is expected to fall short in the Senate.

Trump has bent to conservative pressure and overruled many advisers by backing away from a stopgap bill without the wall money that would have averted the looming shutdown.

The federal government is heading toward a partial shutdown by day's end over President Donald Trump's demand for money for a long-promised border wall with Mexico.

The Senate is being called back to session to consider a package approved by House Republicans. It includes $5.7 billion Trump wants for the southern border with Mexico. And it's probably going to be rejected by senators.

The White House says Trump won't travel to Florida on Friday as planned for Christmas if the government is shutting down. The deadline for a deal is at midnight.

More than 800,000 federal workers will be facing furloughs or forced to work without pay. The Department of Veterans Affairs and others agencies will operate as usual.

At issue is in the impasse is money for other departments, including Homeland Security, and for national parks.

Senators already passed their own short-term spending bill with border security money, but that plan provided no money for the wall.