Her father wrote a letter to her 73 years ago. Her alma mater made sure she finally received it. 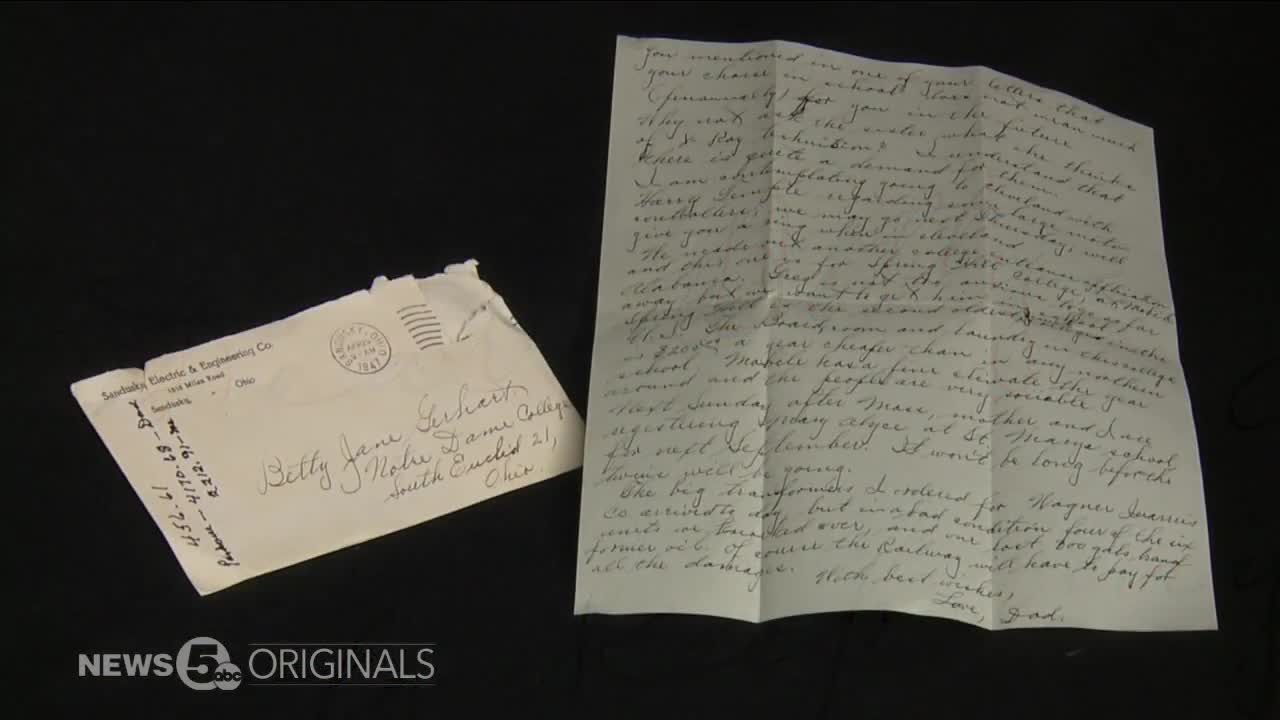 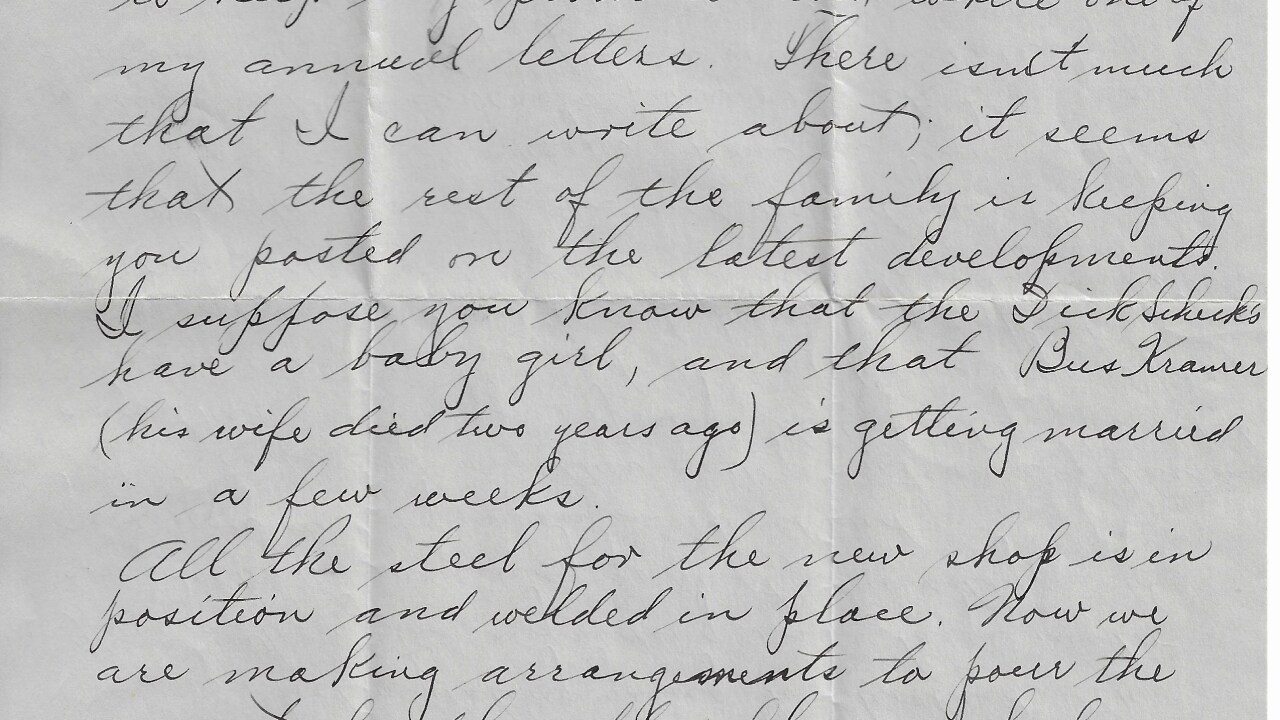 SANDUSKY, Ohio — In today's fast-paced society of instant communication and gratification, there is nothing quite like the thought, care and detail that goes into writing a letter by hand. That special quality has taken on an entirely new meaning for a woman in Sandusky who recently received a letter from her father that seemingly disappeared 73 years ago.

It remains unclear how and why the letter vanished and where it has been for the past seven decades. It also took some sleuth-like research to identify to whom it was written to.

The day before Good Friday, Karen Poelking, the vice president for board and community relations at Notre Dame College, was alone in her office. The students and most of the staff had already been learning remotely for a couple of weeks because of COVID-19.

Campus was quiet. Late in the day, a staff member that had been sorting mail in the basement came across something bewildering and peculiar.

"She had a look on her face. She had a piece of mail in her hand," Poelking said. "She said, 'I'm not quite sure what to do with this. I really just feel like I need to transfer this and put it into somebody's hands. I don't want to leave it anywhere.'"

What the staff member had in her hand was a letter contained in an envelope that the Postal Service uses for damaged or mangled mail. The seemingly benign envelope had a clear plastic insert, allowing the recipient to see what was inside. The letter was perfectly framed, revealing an eye-popping postmark date.

"I looked at the envelope back and forth, trying to get any other identifier. I did the math. The first thing I did in my head, 'My God, this letter is 73 years old. Where has it been? Where has it been?'" Poelking said. "This was written in 1947. I mean, we weren't even thought of in 1947. Then, when I read it, it was just so touching."

Although she was hesitant about reading the letter at first, Poelking knew she had to read it in order to learn about the letter's author and intended recipient. The letter was addressed to Betty Jane Gerhart, Notre Dame College.

"There was no residence hall, no room number. But of course it was 1947 and we only had two residence halls on campus," Poelking said. "Care, concern, love. It all came through in this letter. It was very sweet. It took me back to my own days in college, getting mail from my folks."

The author's perfect penmanship first made Poelking believe that it must have been written by Betty's mother.

"I thought that this person must have went to Catholic school because the cursive was just so beautiful. When I saw it, it was signed by 'Dad.' I was shocked," Poelking said. "In the letter, I think he mentioned that he was going to come visit her, perhaps in a couple of weeks. Mayhap he did, mayhap he didn't. But she never got the letter."

Knowing how unusual and important the letter would be to the Gerhart family, Poelking took the letter home over the Easter holiday for safe keeping. There was no way she was going to let the letter out of her sight.

Unsure how far back the nearly century-old college's records would go back, Poelking reached out to the top member of the school's alumni relations department, who was out of the office and working remotely. He searched the college's enrollment records and found an entry for Betty Jane Gerhart Smith, who graduated from the college in 1949. Unfortunately, the last known address that the college had on file for Betty was more than 20 years old.

"Thank God for the internet," Poelking said. "I just googled: 'Elizabeth Jane Gerhart Smith.' What came up, sad to say, was Victor's obituary, which was her husband."

Victor Frances Smith of Sandusky passed away in July 2018 at the age of 93. The obituary for the WWII veteran and longtime veteran of the Ohio Veterans Home said he was survived by his wife, Betty. Ironically, Victor worked at Sandusky Electric Inc., which also employed Betty's father.

With yet another clue, Poelking scanned the White Pages. In the sea of other 'Betty Smiths' in Northeast Ohio, there was one entry in particular that caught Poelking's attention. Using reverse lookup, the phone number for this Betty Smith came back to Parkvue Senior Living Community in Sandusky.

After a phone call, Poelking learned that Betty was, in fact, a resident at Parkvue. Poelking penned a letter herself, outlining how the 1947 letter came to be in their possession and the lengths the college went to find its intended recipient.

As irony would have it, because of COVID-19, Poelking was forced to send the letter via USPS instead of delivering it by hand.

"I was shocked. I was more than happy though but I was really surprised. I never expected [a letter] 73 years later. It's fantastic. I'm just thrilled to death. Everybody is [thrilled], including all of my sisters," Betty Smith said. "The little four-year-olds [in the letter] are 77 now. They are as excited as any of us. I never even thought about it because it was so long ago. We've moved. I got married and we've moved. I never dreamed that we would be interviewed about a letter he wrote to me."

Betty, said her father, Joseph Gerhart, would occasionally write her letters while she attended Notre Dame. Her father's penmanship and its textbook, free-flowing cursive style was well-known throughout the family. Betty said people would often have her father write letters for them because his handwriting was so pristine. Joseph and his wife, Jane, had 44 grandchildren.

"It's a great memory. It's a keepsake. It's something they can hold onto. That's important," Poelking said. "I know I would value it. It would mean the world to me. If it meant something to her, that's all that matters to me. That's the important thing. Betty said, 'This made my day.' When she told me that, I said, 'Stop, you just made mine.' What I'd like to know is who found it at the post office."

Perhaps how the letter re-entered the mail system isn't nearly as important as the fact that Betty has the letter now, even after 73 years.

"The letters mean more to me than any amount of money, that's for sure," Betty said.