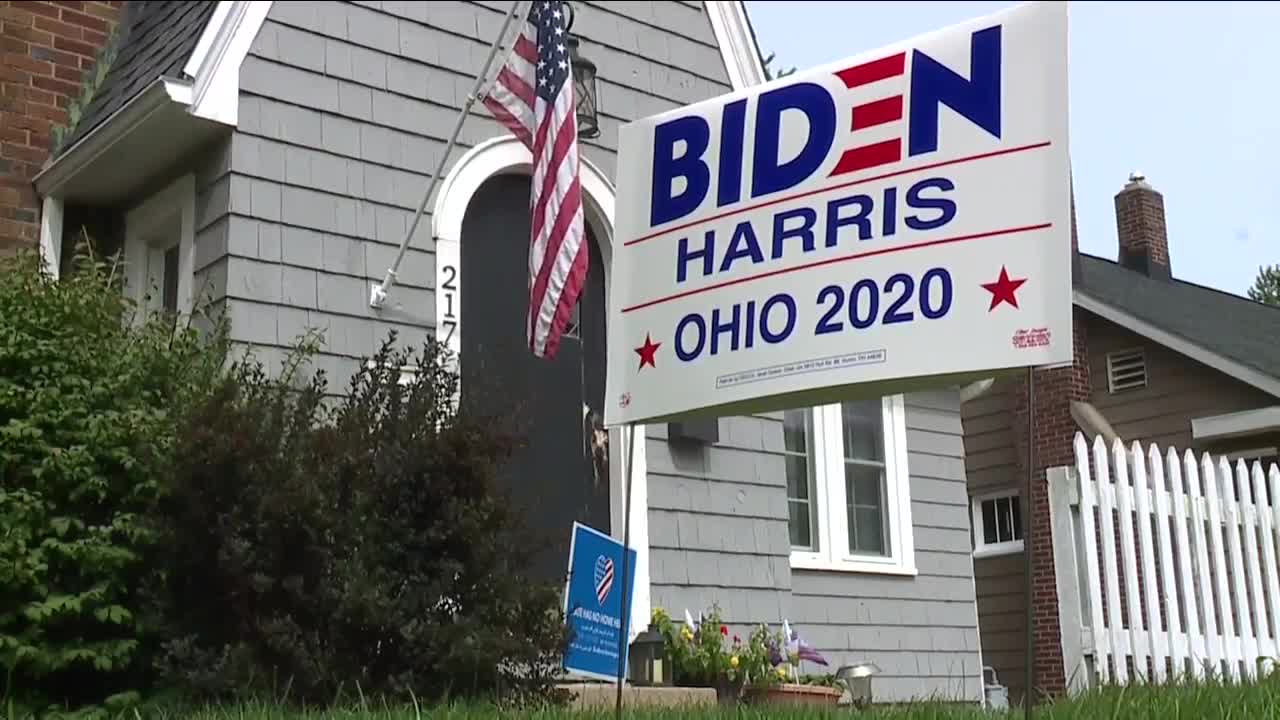 Medina County Democrats are offering two cash rewards for the arrest and conviction of individuals responsible for acts of political intimidation within the county after yard signs were destroyed and threatening letters were sent, according to Medina County Democratic Chairperson Mike Kovack. 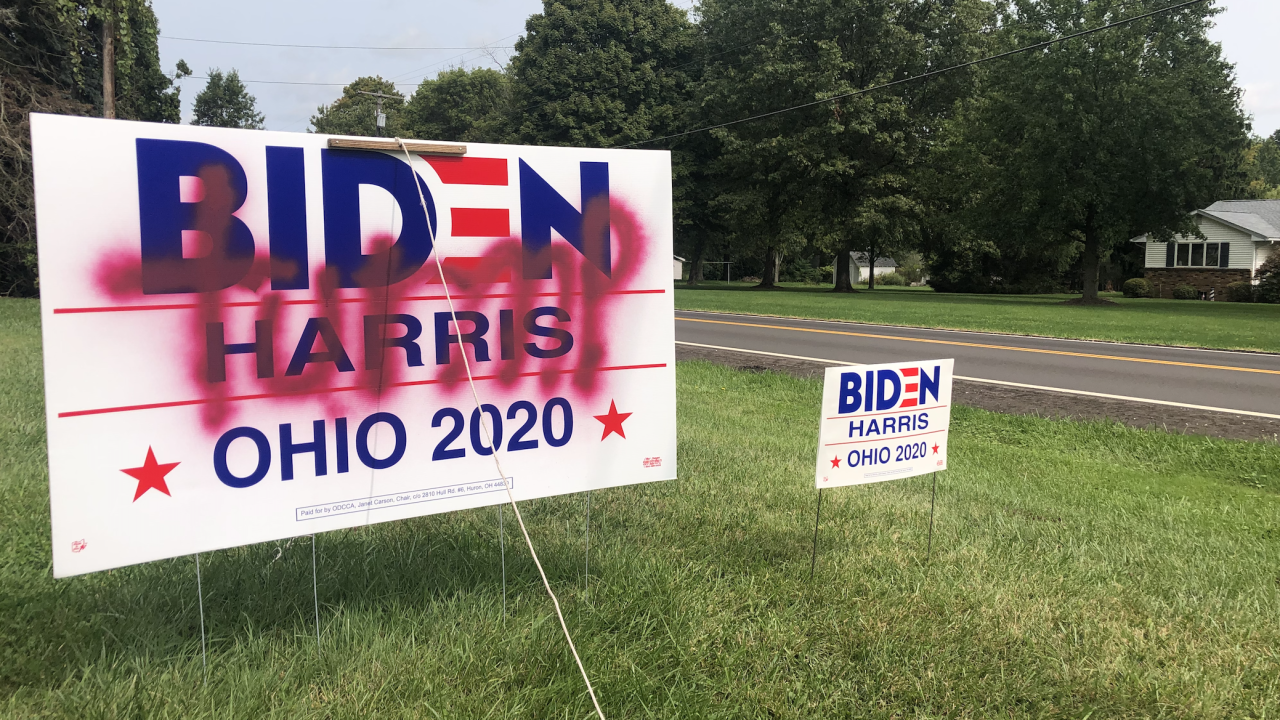 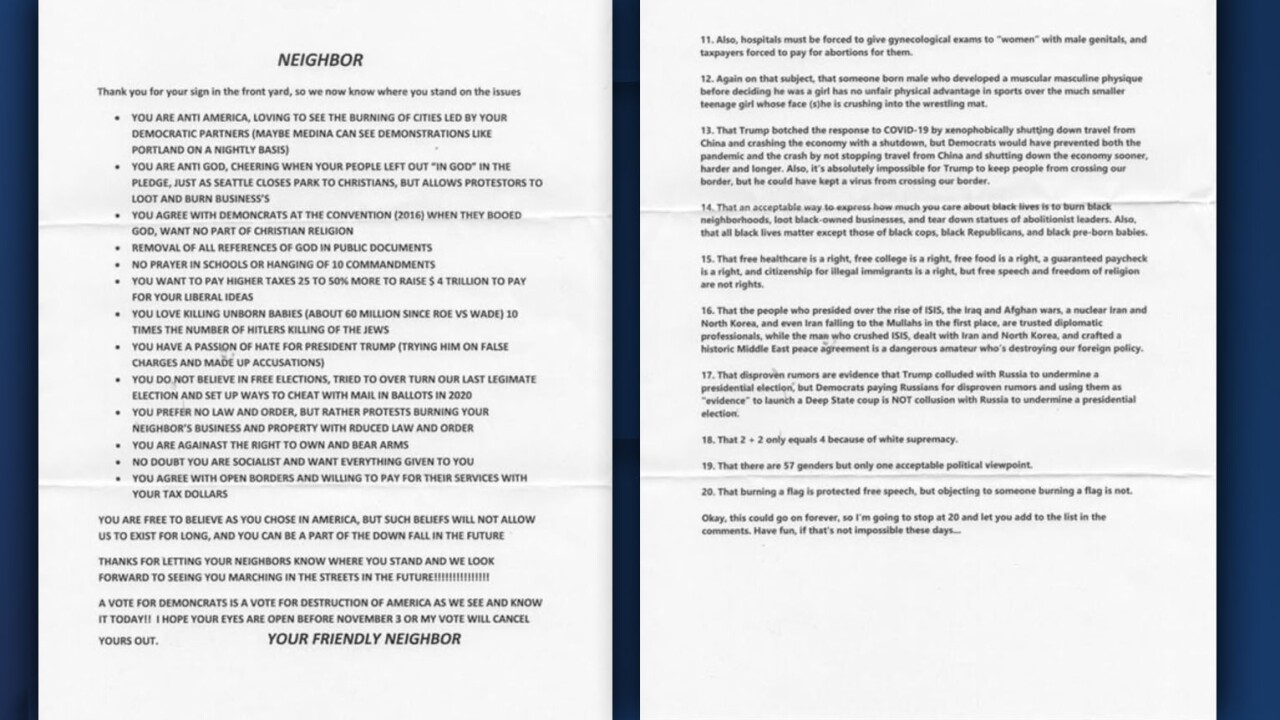 MEDINA COUNTY, Ohio — Medina County Democrats are offering two cash rewards for the arrest and conviction of individuals responsible for acts of political intimidation within the county after yard signs were destroyed and threatening letters were sent, according to Medina County Democratic Chairperson Mike Kovack.

Kovack said last week in Hinckley Township, a resident had her “Biden for President” sign destroyed and stuffed in her mailbox, and then an explosion destroyed the mailbox and sign.

Pieces of the mailbox were found across the street from the force of the explosion, Kovack said.

The residents of the homes that had their signs stolen also received threatening letters, dated on the same day the signs were taken, calling the residents “anti-American,” “anti-God” and claimed they wanted the “destruction of America” before ending with the line “Thanks for letting your neighbors know where you stand…” and signing the letter with "Your Friendly Neighbor," Kovack said.

“There is no way this isn’t a coordinated effort,” he said.“We will not stand for this. This is despicable, deviant behavior that has no place in Medina County. We believe in law and order, and the Medina County Democratic Party will fight to bring these criminals to justice.”

The theft or destruction of a political yard sign is a first degree misdemeanor and is punishable by up to $1,000 fine and 180 days in jail.

"We are averaging I would say between 10 and 15 people a day. It’s kind of the same story, all of our whole neighborhood all the signs are gone," said Tom Weyand, the executive director of the Republican Party of Medina County.

Weyand says the letters his democratic neighbors are allegedly getting in their mailboxes are uncalled for.

"I think you have the fringe on both sides of the aisle thinking that's going to make some sort of difference, I think its more irritating than it does any good or bad," said Weyand.

“I know that these actions do not represent the majority of our Republican brethren in the county,” Kovack said. “But in light of the extent and reach of these actions, I would ask the Republican Party and indeed, everyone in the county to also speak out against these crimes and use their influence to act against these extremist elements to help bring these crimes to an end.”