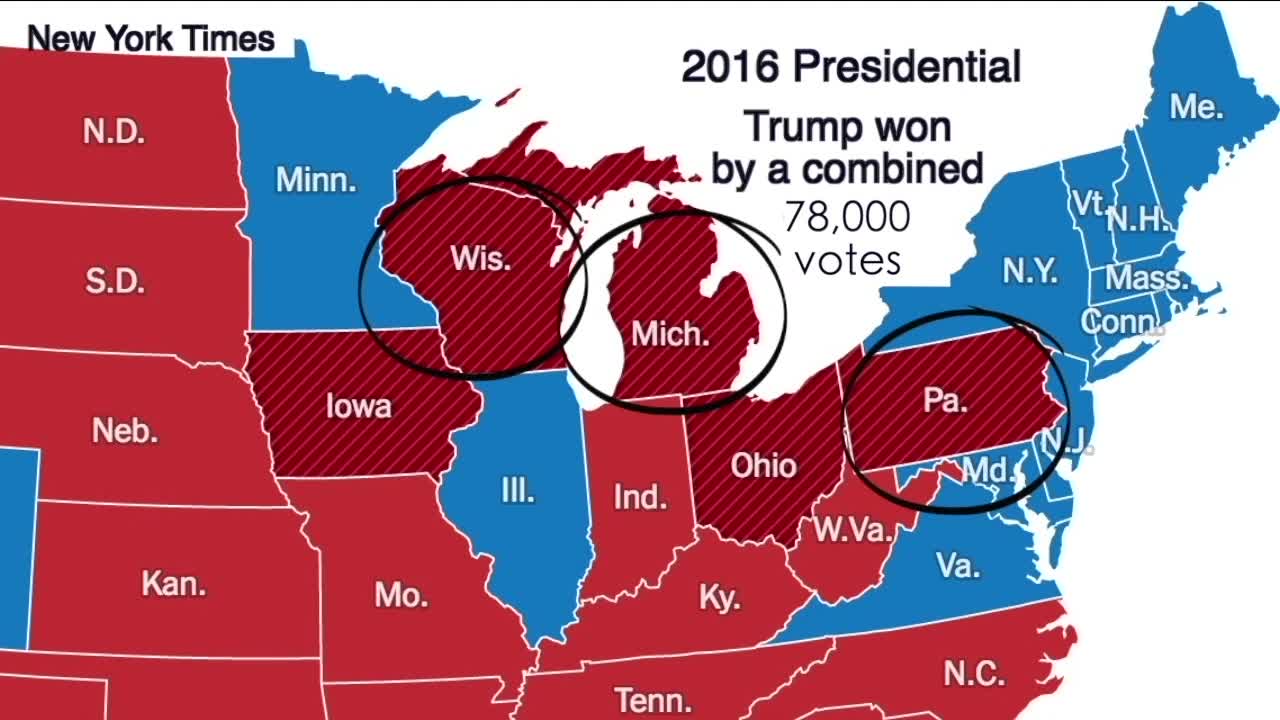 CLEVELAND — In the race for the White House a new CNN poll shows former Vice President Joe Biden with a 14-point lead nationally over President Donald Trump, it is the largest head-to-head lead for the Democrat in any poll to date.

“I think a lot of that has to do with public reaction to a variety of factors, the president's handling of the COVID-19 crisis and more recently certainly the demonstrations across the country in the wake of the George Floyd killing in Minneapolis,” said News 5 Political Analyst Dr. Tom Sutton of Baldwin Wallace University.

The poll comes as the Trump campaign has been spending money for television ads to run in Ohio, a state he won by eight points in 2016 but is head-to-head with Joe Biden this year, trailing in the state 45-43 in a Fox News poll released last week.

“I think it shows that he needs to be on the offensive to defend himself in states that were reliably safe like Ohio, Iowa, Georgia,” Sutton said. “One of the big differences from 2016 is that as much as he was publicly known, he was not known as a president, he was known as a candidate and now we've got four years to judge him by as a president and that presents a very different picture that people are going to make their judgments on.

“He's got his core support of about 40 to 42% among general voters and very high support among Republicans but now he's got the rest of the electorate that he's got to convince of his message and his agenda and smart for campaigning he's not taking anything for granted and I think that's another reason why we're seeing this spend in Ohio this early.”

The Real Clear Politics average of polls also shows the president trailing in the battleground states of Pennsylvania, Michigan and Wisconsin placing Ohio as the red line in the sand.

“There is the historical factor that Ohio has voted for every winning candidate, with the exception of 1960, in modern elections. So Ohio really is a bellwether in that Ohio is more supportive of Trump than those three states although it's mixed and then you throw into play states that were also safe like Arizona, Iowa, Georgia,” said Sutton. “If you don't get Ohio then in terms of the trend line you are definitely not going to win those other states and you're going to lose the electoral college.”

The pandemic has changed the very nature of campaigning while the protests have done something Biden wasn’t able to do prior Sutton said and that motivates Democrats.

“That's really the political challenge because the demonstrations have a life span. They've lasted longer I think than many people expected and they're still going on but when we get into the actual steps that need to be taken, those steps are what start to get mired in the details and lose focus. However when you have things like the Minneapolis City Council signing a pledge, the majority of them, veto proof majority saying they want to disband and reorganize their police department that alone can be a story that continues to carry national attention and will play to the benefit of the Biden campaign,” Sutton said.