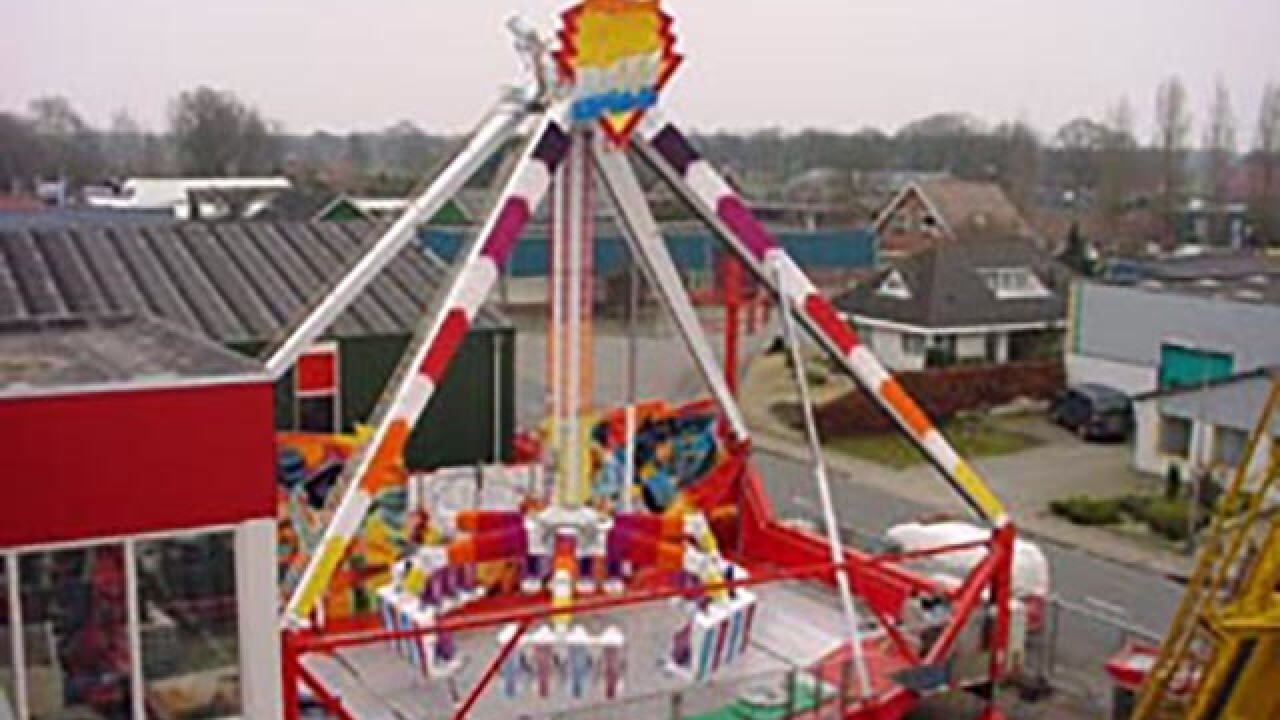 Copyright 2017 Scripps Media, Inc. All rights reserved. This material may not be published, broadcast, rewritten, or redistributed.
<p>Photo courtesty of KMG</p>

On Wednesday evening, an 18 year-old man was killed and seven others were injured after a ride malfunctioned at the Ohio State Fair.

According to Ohio Highway Patrol, three of the riders who were injured are in critical condition.

The ride is called the "Fire Ball."

Dr. David Evans of Ohio State University's Wexner Medical Center said, "Multiple passengers were ejected at high speed" from the ride, traveled at least 20-30 feet and then "crashed at a significant distance from the ride."

Created by Dutch manufacturer KMG, Fireball is a pendulum style ride that weighs 54 tons. Six individual arms are on the ride, with each arm attaching to a gondola-style cabin that can fit up to four passengers. At maximum capacity, the ride can accommodate 24 riders at one time. Each rider is secured into the cabin with an over-the-shoulder harness.

It was one of these gondolas that broke off of the ride in Columbus.

Ride protocol calls for riders to be secured before the loading platform lowers and the claw begins to slowly swing. As momentum picks up, the arms begin to rotate. The swinging continues until the ride hits its peak of 120 degrees. At this angle, riders are at the halfway point of being turned completely upside down.

In the United States, the ride is commonly known as the Fire Ball. When marketed in other countries, it is known as the Afterburner.

According to the KMG website , construction of the attraction takes 3 to 4 hours with a three person crew.

The Fire Ball was provided to the Ohio State Fair by Amusements of America. According to the company, the ride made its debut in 2002. It is classified as an 'aggressive thrill' ride.

Around 7:24 p.m., a gondola with four passengers separated from the Fire Ball ride at the Ohio State Fair. All of the riders were ejected from the ride.

The Department of Agriculture is responsible for inspections of all rides. According to Michael Vartorella, the chief ride inspector of the Amusement Ride Safety Division, the ride had no red flags during inspections.

An 18-year-old man died and seven others were injured.

The end of summer marks the start of fair season. Wednesday night was the first night of the 11-day fair in Columbus.

While the Ohio State Fair reopened on Thursday, all rides were closed pending further inspection.

In the aftermath of an unexplained ride malfunction, other states are taking action to protect fair goers and riders.

The North Carolina Department of Labor has shut down the Fire Ball ride in the state. The California State Fair has also followed suit, shutting down the ride. The Indiana State Fair announced that it will not operate the ride at the 2017 fair.

The Kentucky State Fair has also stopped operations of all Fire Ball rides operated by their operators until further notice. A spokesperson for the State Fair of Texas, which begins in late September, has said the fair will not have the ride in its selection as a result of the Ohio State Fair incident.