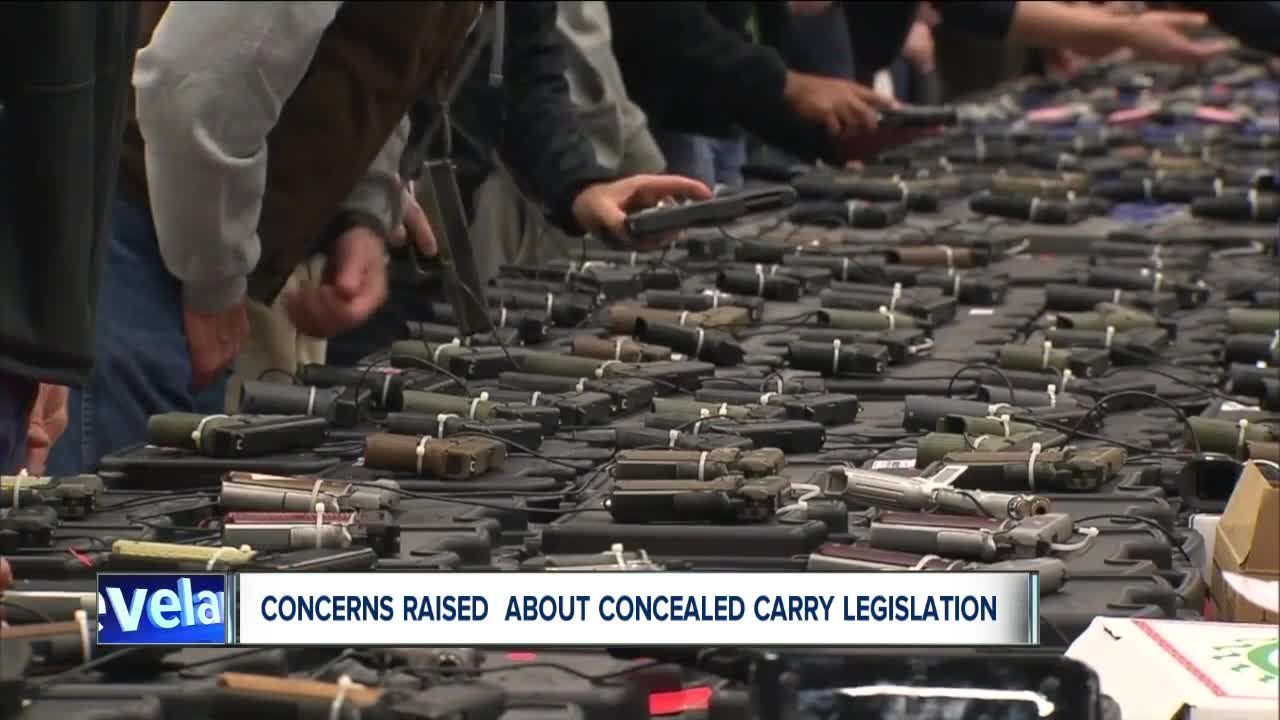 After eight hearings over two months, an Ohio House committee passed a bill that will eliminate the licensing and training requirements of carrying a concealed weapon.

CLEVELAND — After eight hearings over two months, an Ohio House committee passed a bill that will eliminate the licensing and training requirements of carrying a concealed weapon. Several organizations that represent law enforcement officers and prosecuting attorneys have come out in opposition to the measure, arguing the deregulation could prove dangerous for police and the public.

The House Federalism committee passed House Bill 178 by a 7-4 vote on Wednesday after a series of tense and often emotional hearings.

The so-called constitutional carry measure eliminates the eight hours of required training in order to carry a concealed firearm, in addition to wholly eliminating a concealed carry permit. The proposed legislation would only apply to a resident who’s at least 21 years old and does not already have a weapons disability.

Kim Rodecker, the owner of Concealed Carry Courses LLC in Cleveland, remains conflicted about the legislation.

He said he supports less government regulation when it comes to the right to bear arms. However, he strongly disagrees with the removal of the required training – and it’s because it would affect his bottom line.

“I am in the business but I can always go find something else to do. Education is the key to a lot of this. Just a simple bit of education,” Rodecker said. “I feel like I have stopped some people from doing something stupid just because they did that little bit of training. My classes, we have about 2 hours on the gun law alone to keep you from going to jail… or going to the morgue.”

Some of the lesser publicized aspects of the legislation have been of serious concern for some law enforcement advocacy groups. Under current law, concealed carry license holders are required to tell a law enforcement officer that he or she has a concealed weapon in the event of a traffic stop, for example. The proposed legislation would eliminate this required disclosure.

In a database available to all law enforcement agencies in Ohio, a concealed carry license is tied to the registration of a person’s vehicle. In the event of a traffic stop, officers can search the license plate number in the database, which would inform the officer of whether the owner has a concealed carry permit. The system has its limitations, however.

The OPBA is among a half dozen law enforcement agencies across Ohio that have come out in opposition to the proposed legislation. Other groups opposing the measure include the Ohio Police Chiefs Association; Fraternal Order of Police; Ohio Prosecuting Attorneys Association and Buckeye State Sheriff’s Association.

Holb said the OPBA is also deeply concerned about another aspect to the legislation.

According to the legislative services commission, the proposed legislation would also allow certain categories of people to carry a concealed weapon who currently cannot. The legislative services commission said the proposed bill would allow people currently charged but not yet convicted of a felony to carry a concealed weapon. People charged with certain misdemeanor offenses, including assault of a police officer, would also be allowed to carry a weapon. Someone who has been convicted of two or more counts of misdemeanor assault or negligent assault within five years would also be permitted.

“Public safety, we believe, is certainly going to be impacted by this bill as currently written. Any time a law enforcement officer interacts with the public, they want that to go smoothly, just as the person interacting with the officer does,” Holb said. “We don’t think this is an argument against the second amendment. We think it is an argument of reasonableness.”

Proponents of the legislation believe it would get Ohio law back in line with the true spirit of the Second Amendment that the Founding Fathers had envisioned. Supporters also look to the crime rates in some states with open carry, including Vermont, as an example of why open carry works.

As many as sixteen states have laws allowing residents to carry a concealed weapon without first obtaining a license. The proposed legislation could be referred to another House committee for additional review. However, that does not appear likely to happen before the summer recess.