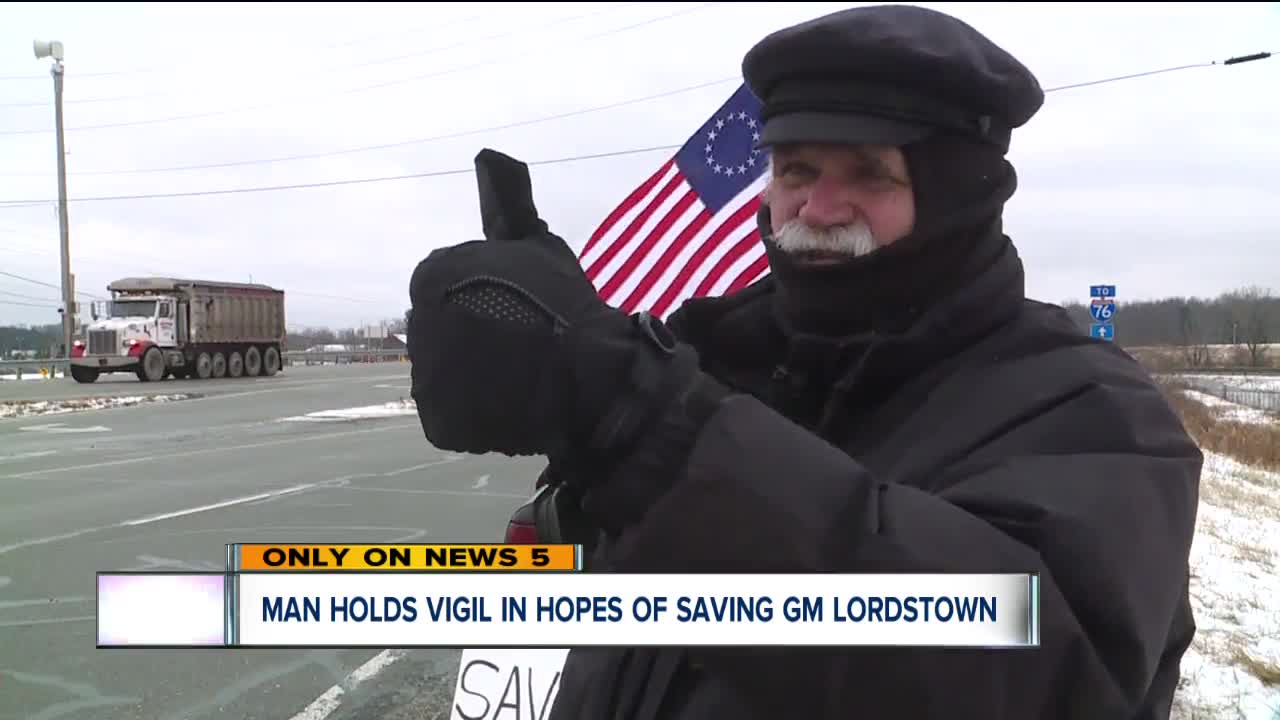 Werner Lang has been holding a vigil outside the Lordstown GM plant every day this year. On Wednesday, he finally got some company. 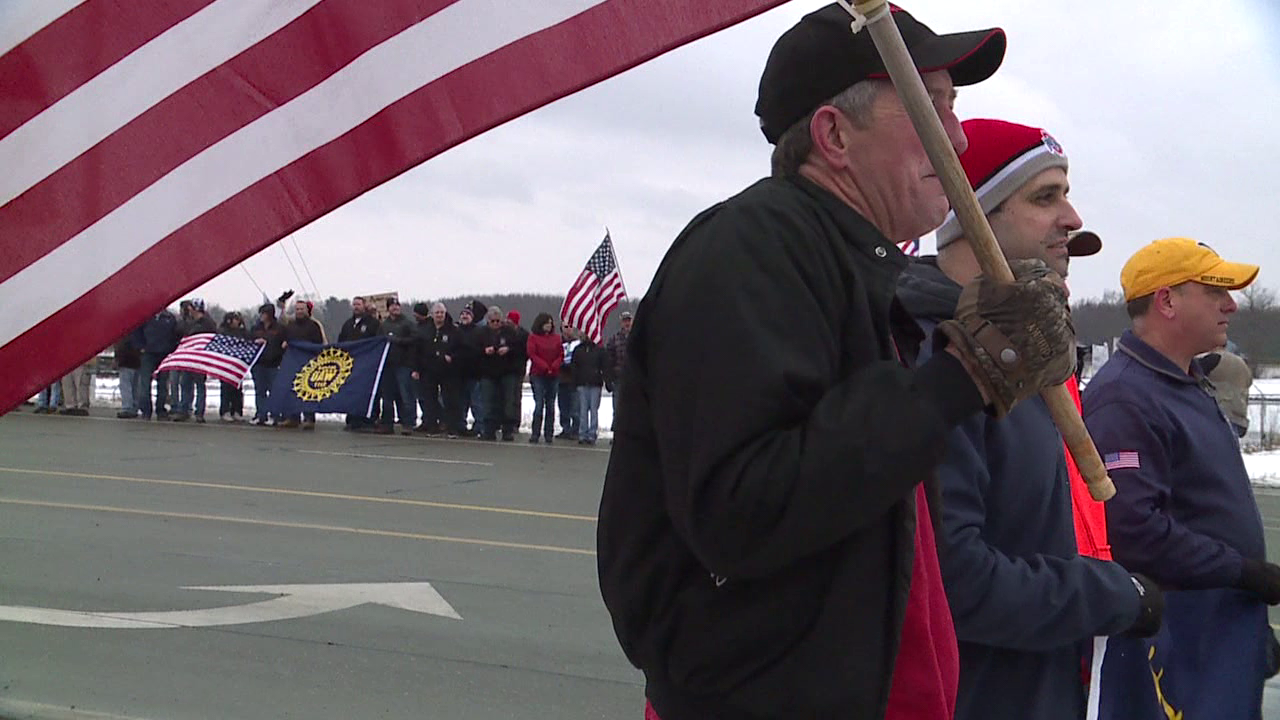 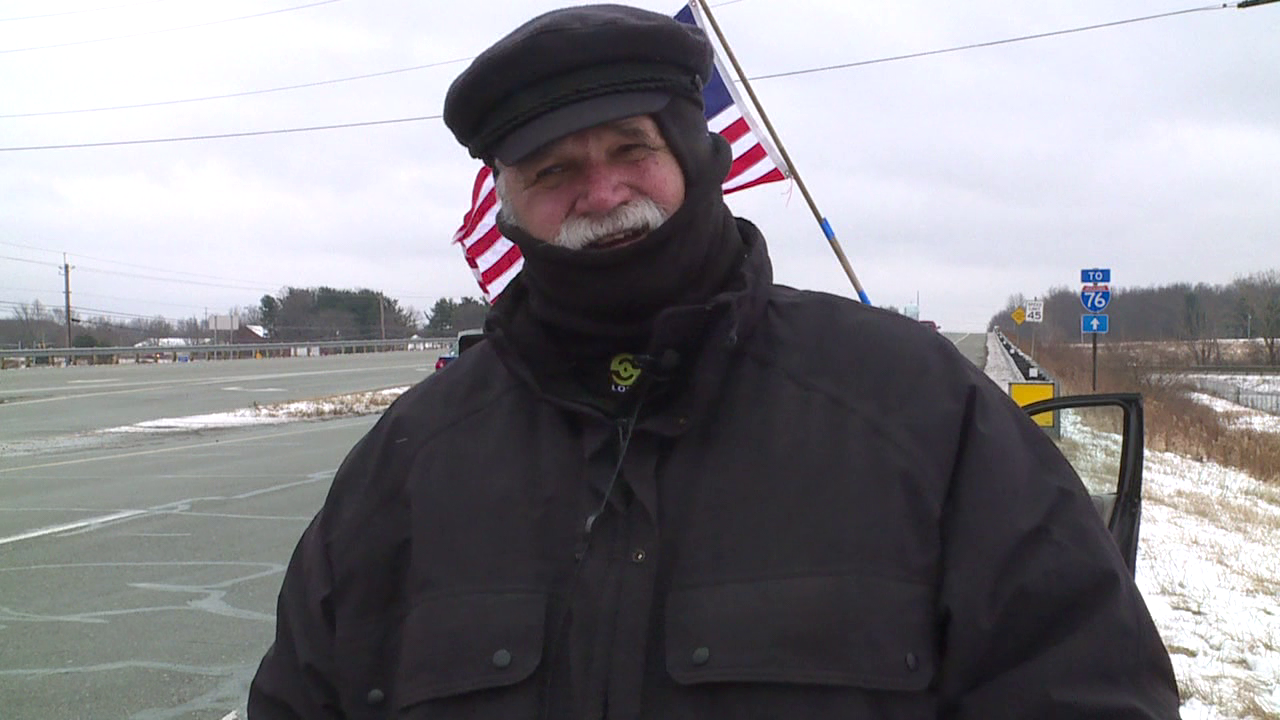 LORDSTOWN, Ohio — When you hear the word vigil, you might picture candles, balloons, pictures of a fallen loved one, and people in mourning. But in Lordstown, one man has been holding vigil every day, for weeks, mourning the loss of the GM plant.

“It can't happen, closure of this plant is not an option!" said retired teacher Werner Lang. He's never worked for General Motors, and he doesn't even live in Lordstown, but he's been showing his support for the workers since GM announced it wouldn't make any more cars there starting this spring.

On Wednesday, Lang finally got some company.

From every show of support from a passing truck, to the arrival of a new friend, Lang’s hope grows deeper. The stakes could not be higher.

“This is our future at stake. Our future in this whole area hangs in the balance,” he said.

So he’s been holding vigil every day so far this year in the bitter cold temperatures.

When the clock strikes three, he makes sure he’s outside where the workers walking out of the plant across the street can see him.

“We really appreciate what you're doing for us,” said one person standing in solidarity.

Lang makes it clear: there's no choice but to fight.

"It's the season for resurrection,” he said. “Too much hanging in the balance."

Lang doesn't even live in Lordstown. He lives in neighboring Newton Falls. But he knows what happens in Lordstown will ripple across the Mahoning Valley.

"This is not only a life and death struggle for this plant and the future of the workers, but for all communities in this area,” he said.

For 15 days, Lang carried this burden alone. On Wednesday, he finally got some company.

Workers who had a foreboding feeling when production was cut to just one shift last April and union leaders who know all too well the impact of losing this plant joined Lang on the side of the road.

“There's thousands of jobs that aren't directly related to the plant,” said Tim O’Hara, VP of the UAW Local 1112. "We think that approximately five to seven jobs in this area are indirectly connected to every single job at GM Lordstown."

O’Hara said the devastation of the community has already began.

“We're losing a lot of good people. They're already transferring to other plants, you know,” he said. “It's not just losing people out of the local union, it's taxpayers out of this area, you know, it's kids out of the schools."

That's why as the day passed, more and more people started lining up alongside Lang. They brought signs, even sharing some with each other.

“I'm hoping that the spirit of God will descend upon the decisionmakers and make them realize that this is more than just simply an automobile plant,” Lang said. “This is the basis of the economic viability of the entire area. This is about America."

The goal is to get GM to allocate another vehicle to the plant – preferably, something all electric.

But really, “anything, anything’s better than nothing,” said one person standing with Lang.

“That’s for sure,” Lang agreed.

Everyone in Lordstown and across the Mahoning Valley knows one thing for sure.

"This will kill us if this plant closes,” Lang said.

This community, built in the shadow of a single company and now united to save itself, has no plans of giving up hope.

"We want to make sure they hear loud and clear from everybody in this community that we will not stand for permanent closure,” Lang said. “We plan on continuing this every day at the 3 o'clock hour until a new allocation is made."

There are nearly 1,500 workers at the Lordstown GM plant who could lose their jobs when the plant idles this spring.