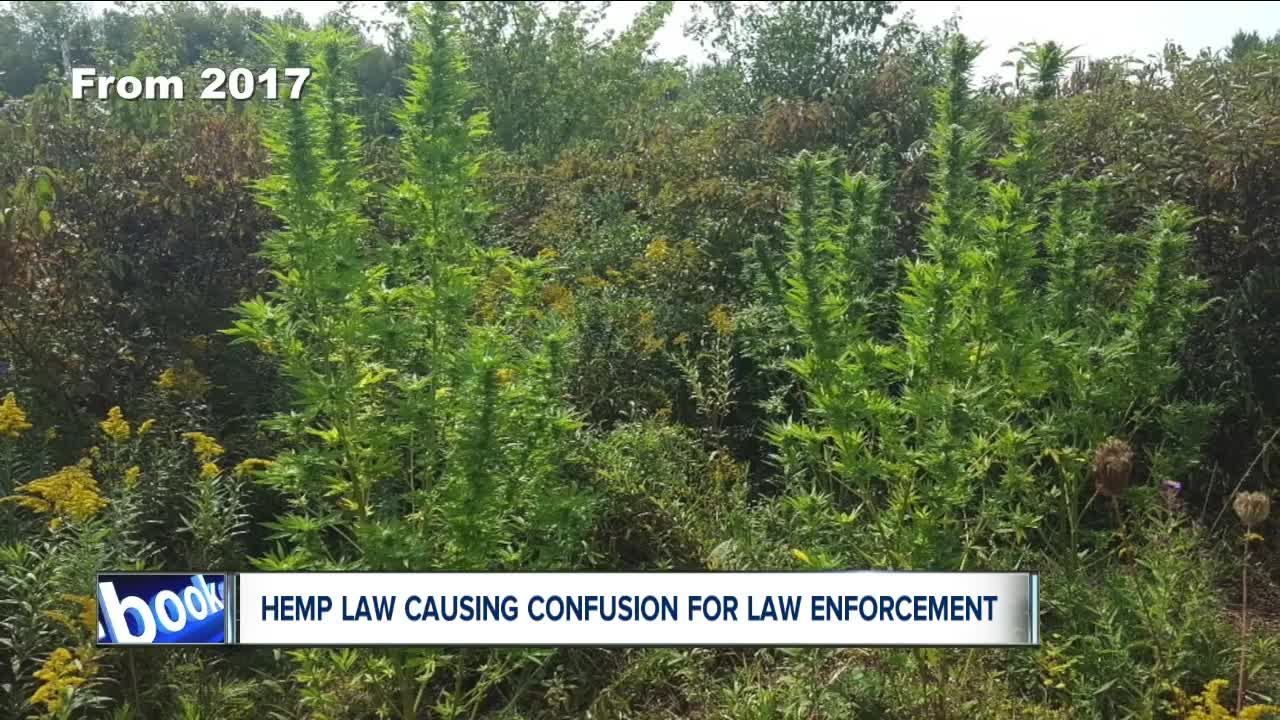 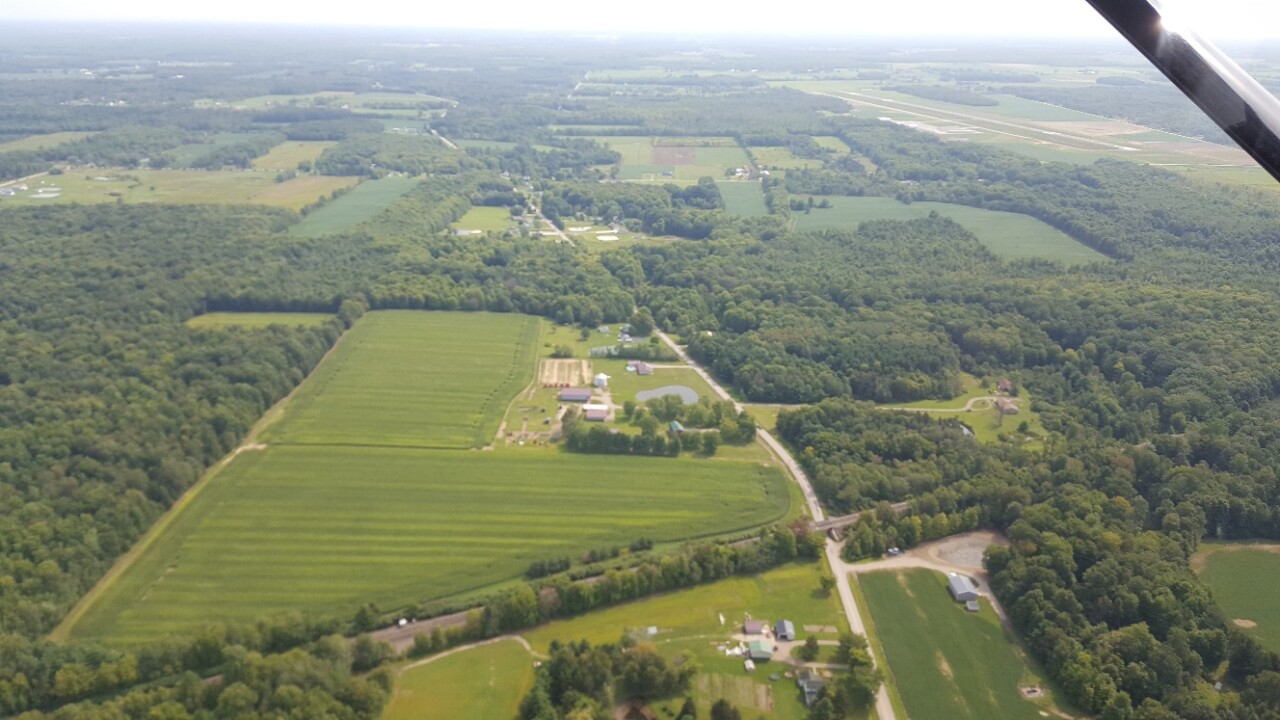 ASHTABULA COUNTY, Ohio — Ohio's new hemp law is causing some confusion for law enforcement and prosecutors when it comes to charging people for growing marijuana or hemp plants.

Task force officers from the Crime Enforcement Agency of Ashtabula County (CEAC) participated in a flyover operation on Tuesday with members of the Ohio Bureau of Criminal Investigation and the Ohio State Highway Patrol. During the flyover operation, one of many conducted across Ohio each year, officers seized between 65 and 85 plants from various places around Ashtabula County. However, no one was charged as a result.

CEAC Commander Detective Greg Leonhard said yearly flyover operations can be hit-or-miss. In the past, the county has seized thousands of plants in a single operation. More recently, though, Leonhard said the number of plants seized has been in the mid- to high-triple digits.

This year, for the first time, Leonhard said no plants were found growing in cornfields in Ashtabula County, and unlike in years past, officers could not see any spots cut out in cornfields where marijuana plants were growing. The plants that were found were "near property lines or on edges of residential properties."

"This year, we just didn’t pick the right spots," Leonhard said of the low number seized.

According to an Ohio BCI spokesperson, the U.S. Drug Enforcement Agency (DEA) provided a $400,000 grant to BCI in 2019 for "marijuana eradication." That covers all flyover operations in the state of Ohio.

Of that amount, $300,000 goes toward the aircraft used in the flyover operations, $63,000 covers overtime for BCI agents involved and the remaining $37,000 goes toward personal protective equipment, equipment, supplies and materials, training, and vehicle rental. The spokesperson said the salaries of BCI personnel are not covered by the grant, only their overtime pay.

In an August 1 letter sent to prosecutors by BCI, the agency advised prosecutors on how the signing of Senate Bill 57, which decriminalized hemp under Ohio law, would affect laboratory testing. Hemp is "defined as cannabis containing not more than 0.3% THC as calculated on the dried weight," according to the letter.

BCI said the agency is in the early stages of "validating instrumental methods to meet this new legal requirement" and said that could take months. The letter noted that private, accredited laboratories were available for testing, if needed, and recommended local prosecutors "suspend any identification" of marijuana testing and not indict "any cannabis-related items [...] prior to the crime laboratory you work with being capable to perform the necessary quantitative analysis."

The letter went on to note there would be a "several-month backlog of cannabis-related cases to work which need to be triaged based on statute of limitations" once the method for quantitative testing is complete, which the agency expects to be early next year.

On August 13, Attorney General Dave Yost announced the creation of a grant program to help law enforcement distinguish between hemp and marijuana. The program will provide $50,000 in funding for law enforcement agencies to have "large quantities of marijuana tested in accredited laboratories that have the capabilities to quantify THC."

A BCI spokesperson told News 5 on August 22 that the decision to charge people with crimes for plants seized is left up to each individual county or jurisdiction.

The plants that were seized in this week's flyover in Ashtabula County were burned, after CEAC received approval from the court to destroy them.

"The marijuana that we recovered during the day, that nobody’s going to be charged with, instead of trying to find a place to just hold on to it, it’s better to get it destroyed right away," Leonhard said.

He said there wasn't enough seized in any one location to rise to the level of a third-degree felony.

"And with the change in the law, that practicality is just not there at this point," Leonhard said.

While BCI is involved in organizing flyovers and the dates they take place, Leonhard said, it's up to local agencies to decide if they want to do them. He said Ashtabula County could have declined to take part in the flyover operation.

"We show up, but usually, we’re the ones that have intel, where there may be marijuana growing," Leonhard said. "Even this year, we didn’t get as much of that as we had done in the past."

Leonhard noted that the cost to the county was only the cost of its own personnel, including sheriff's deputies and a couple of Ashtabula and Conneaut police officers. Others present included sheriff's auxiliary, who volunteered their time, as well as BCI and OSHP personnel.

For those who would say the operation is a waste of time and money, Leonhard countered that, even with the new law, it's still illegal to grow hemp in Ohio, as licenses have not yet been issued by the Ohio Department of Agriculture.

"It’s just like any other crime. We still prioritize heroin, meth, cocaine investigations," Leonhard said. "This is a very small part of what we do, marijuana investigations. But it is still illegal. No hemp licenses have been issued. So we’re gonna, even if we can’t test it, if we find it we’re going to take it off of you."

Regardless of whether the crime is a felony, Leonhard said he and other law enforcement officers would continue to do their jobs.

"Does that mean we shouldn’t enforce misdemeanor crimes? We shouldn’t enforce theft at Walmart, when we could be out investigating a burglary or a [breaking and entering]?" Leonhard said. "You've just got to put your time with the importance of the crime. That’s where the majority of our time goes, and that hasn’t changed."

On the other end of the spectrum, Leonhard said he could understand people who might say law enforcement isn't doing enough by not charging people for growing plants illegally.

"But right now, until that is changed, which looks like it’s going to be after the first of the year, we have to play with the cards we’re dealt," Leonhard said. "Next year, that may be different."