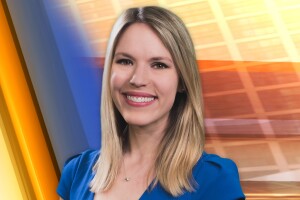 Most Memorable Stories: There are a lot! Some highlights: covering the Republican National Convention in Cleveland, interviewing Donald Trump later that year, flying with the GEICO Skytypers and in a C-130 at the Rhode Island Air Show and interviewing a woman who found a baby left on her front porch in Huntington, WV.

Awards/Honors: nominated for a 2016 New England Emmy for my work as a videojournalist in 2015

Role Model: My journalism role models are Boyd Huppert (from KARE11 in Minneapolis) and Steve Hartman (CBS). They are both incredible storytellers! I always look forward to watching their work.

Favorite Music: I’ll listen to almost anything (with a few exceptions). I love James Taylor and The Beatles.

Favorite Program: My two favorite TV shows are The Wire and The West Wing (both of which I watched years after they went off the air). I also really like How I Met Your Mother.

Favorite Book: It’s hard for me to pick just one! Among many others, one of my favorites is This Land: America, Lost and Found, a collection of nonfiction stories by Dan Barry of The New York Times.

Family: my husband Brett (who is a sports reporter/anchor), my parents (who live in my hometown of Syracuse), an older sister (married with two adorable little boys! They live near Syracuse) and an older brother (who lives in Nashville).

Hobbies & Interests: hiking, traveling, eating, playing with dogs (I used to walk dogs as a side job), spending time with family and friends, reading

Hidden Talent: spelling! I competed in the Scripps Howard National Spelling Bee when I was in 8th grade (2003).

What I like best about Northeast Ohio: There is so much to do here, from food to music to sports, and I love being so close to the lake! It’s also within driving distance of family.

On the weekends I love to: relax with family and friends, try new restaurants, hike and travel.