The Big Test Part 1: Some students return to class while others wait 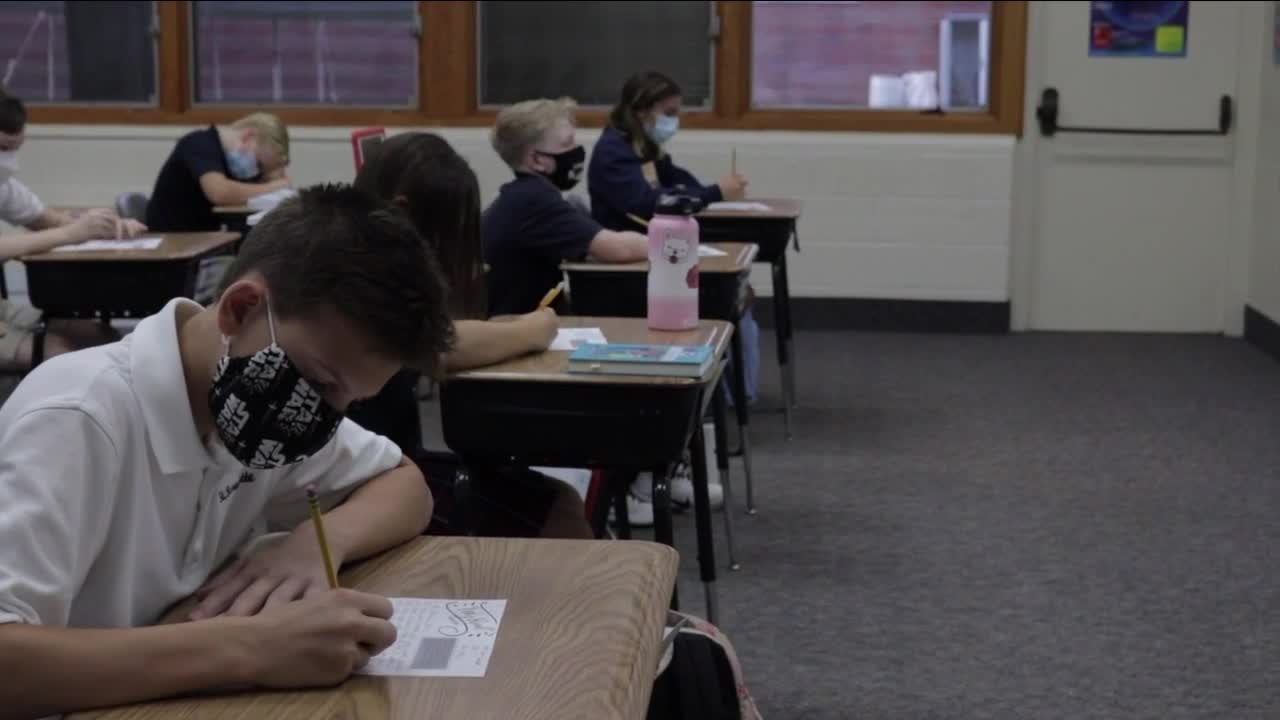 The Big Test: Students return to class while others wait 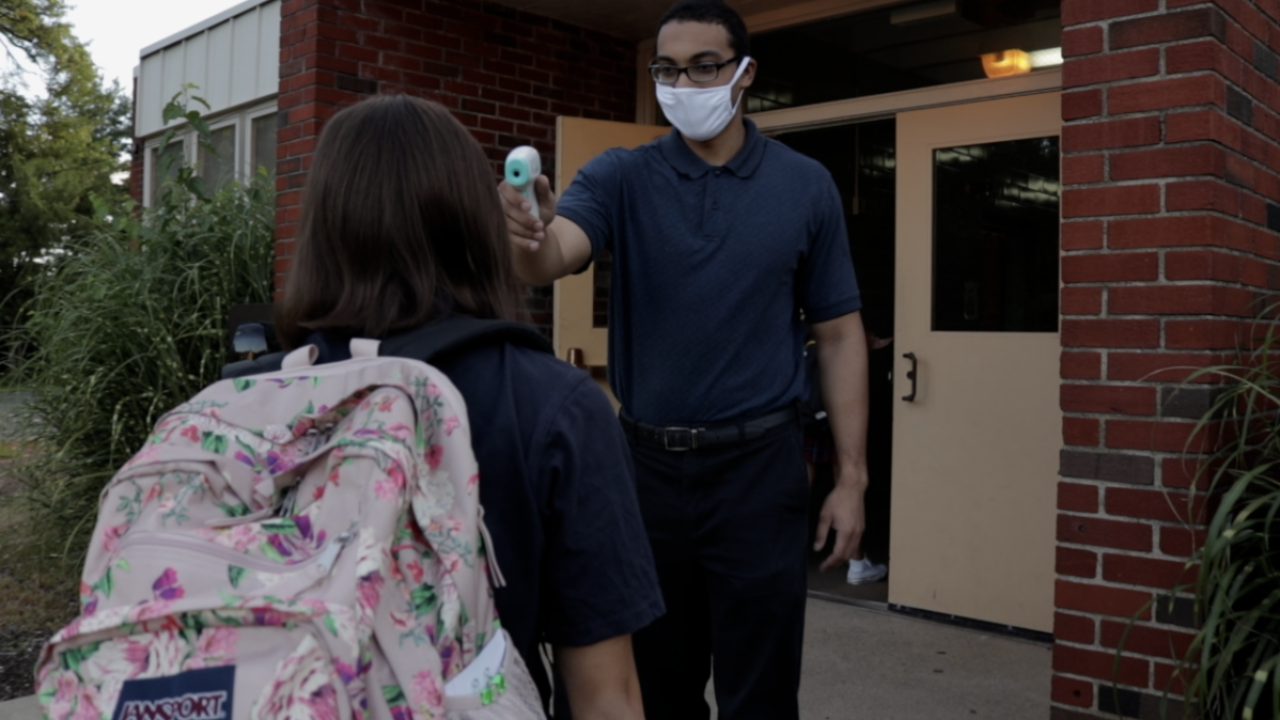 CLEVELAND — Millions of families in Ohio have made their decisions about the 2020 fall semester. Where and how students learn this semester was mostly dictated by districts.

But when faced with a decision, three families in Northeast Ohio did not take the choice lightly.

"It's hard," Natalie Stolph said. "It's like, you don't know if you're making the right choice."

Stolph's three children go to St. Bernadette's in Westlake. The private, Catholic school started the school year offering in-person learning five days a week. The school is also offering virtual learning for families who want to keep students out of the classroom.

Stolph said she and her husband spent about a week weighing their options for their 7th, 5th and 2nd graders. After spending the last half of the Spring semester and summer vacation at home with her kids, Stolph said the transition is not easy.

"Oh, I'm sad," she Stolph said sitting in her living room the day before her kids went back to school. "It's all a little overwhelming. But, it's going to be new. It's going to be different. But I'm confident that the school made great decisions."

There are usually two classrooms per grade at the small Westlake school, but there is enough space, and enough students are learning virtually that desks can be spaced apart.

"I mean, we looked at the statistics and just to see - is it safe?" she said. Stolph likes the plan St. Bernadette's has for students.

This semester, teachers are changing classes instead of the students. For right now, kids are either eating lunch in their classrooms or outside if the weather is nice.

During the time she and her husband thought about how their children will learn this fall, Stolph said she knew the best place for them was at school, learning in-person from their teachers.

"So we feel confident in them going back," she said.

"I was ready and then Corona happened, and I was like, okay, I'm nervous for it," she said about going back to school after learning at home since mid-March.

COVID-19 makes everything that was so familiar about school strange now.

When the Stolph family children, Sydney and her two younger brothers Tyler and Ryan, arrive at school, a teacher or an administrator checks their temperature. They wear masks and use hand sanitizer from portable, standing pumps before even going inside.

"I feel like, in some ways, it is coming along nicely," Sydney Stolph said about the plans her school has in place. "But, I still am not too excited for school because, you know, all these changes and all this crazy stuff and the fact that I don't really have too many friends in my class."

But, if a COVID case occurs, Stolph said there are decisions to be made.

"There's a lot of factors with - would we take them, bring them home and keep them at home? I'm praying that there are no cases," Natalie Stolph said.

"We have a seating chart for students," said Bernadette's principal Maureen Goodwin after the first week of classes was over. "Once I have been notified by a parent or a teacher, I would call (Cuyahoga County Board of Health) CCBH and we would begin contact tracing."

"A letter/email would go home to those students affected," she said in a text exchange.

For now, students will stay six feet apart and masked while having class together at St. Bernadette's.

As of Sept. 3 of this year, only four of the 31 school districts in Cuyahoga County offered five-day, in-person learning. Two districts were working with a hybrid option - where students would spend part of the week at the school and part learning at home - and the rest are all fully remote.

"It's just going to be eight hours long. It's going to be a normal school day just on virtual reality," said Xavier Nixon about his first day of the new year at Breakthrough Schools.

Xavier and his sister Milie both go to Breakthrough and both are doing schoolwork virtually this fall.

"So, I think it'll be really frustrating. But, I think we'll find a system through it all," 8th grader Milie Nixon said.

Instead of walking the halls of their middle school, the siblings will be down the hall from each other at home.

"They don't have any say — you and they have zero control over what they're able to do," Katherine Scharsch said about how she empathizes with her children.

Scharsch said Xavier and Milie are smart and like school but she worries how long they can stay focused in front of a screen all day. Their first day of virtual school was Sept. 8.

Xavier's day started just fine with all of his links working. Milie was faced with a link that wasn't working so she missed her first homeroom of the year. However, after 30 minutes on FaceTime with the school's principal, Milie said she was relieved to know she wasn't the only one with a problem logging on.

In Parma, Normandy High School senior Nathan Lazich is going to the school for marching band but not for classes.

"Senior year is always supposed to be your easiest," he said sitting at his desk in his bedroom. "You know, the first three years are the ones where you work your rear end off and then the senior year is kind of where you just kick it into cruise control and you're just, kind of, riding the year out ... The senior year for us is going to be hectic as a baseline."

Lazich is one of thousands of students who was trying to decide how they wanted to learn this fall while the district in Parma was making plans.

At the end of August, the district announced that it could shorten the amount of time students would be learning virtually full-time if cases in Cuyahoga County stayed low. If there are three consecutive weeks where the county's cases don't spike, some students could be back in classrooms by Oct. 1.

Lazich, who is focusing on engineering classes, is ready to go back to school.

"It's like being in prison," he said about having classes and staying quarantined in the same place. "You can't go anywhere without having certain restrictions. It takes all the fun out of everything."

Lazich's younger brother Drew is also learning virtually. In the Spring, Nathan Lazich would help him study when all of his work was done.

If cases remain low and students in Parma go back to school, Lazich wants to be one to return.

"Some kids thrive better when their teachers are physically there," he said about what some students need. "And, without that, they sometimes don't do as well as they'd hoped. So, I think that needs to be a big priority is getting us back in school fulltime."

This is the first report in a series called The Big Test where News 5 will follow these three families during the school year.