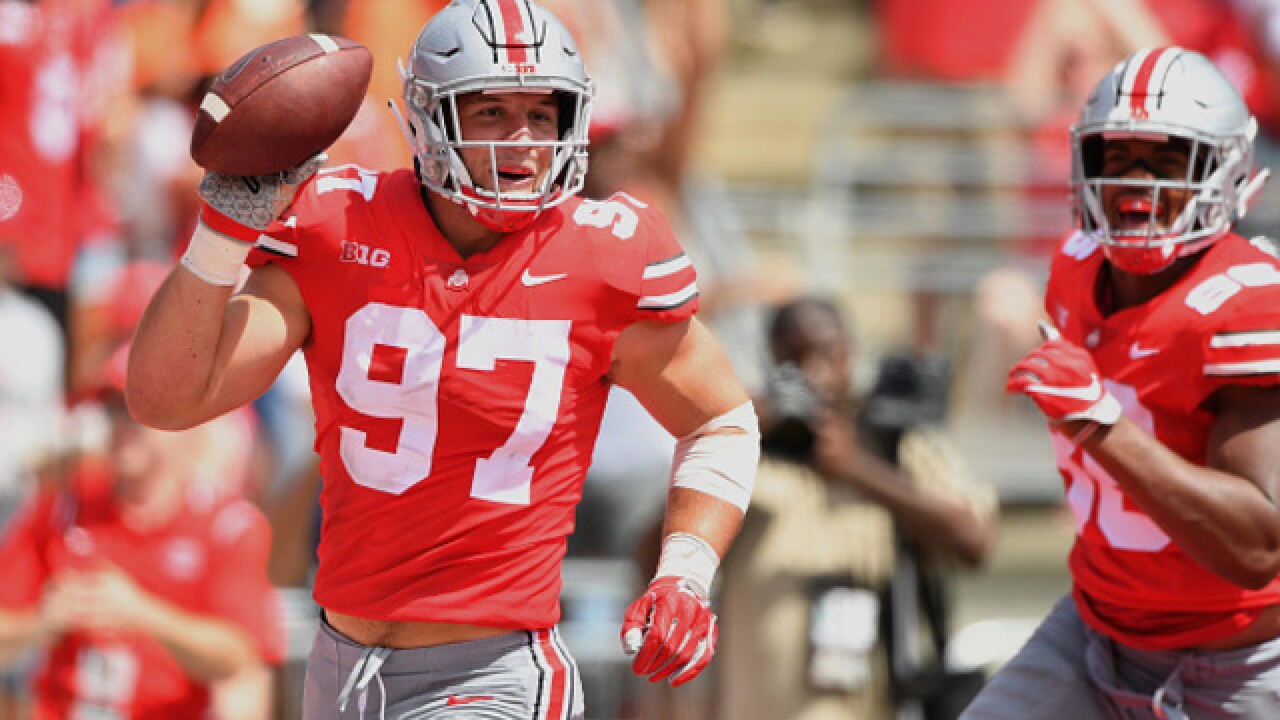 Image copyright 2018 Getty Images. All rights reserved. This material may not be published, broadcast, rewritten, or redistributed.
Jamie Sabau
<p>COLUMBUS, OH - SEPTEMBER 1: Nick Bosa #97 of the Ohio State Buckeyes celebrates after recovering a fumble in the end zone for a touchdown in the second quarter against the Oregon State Beavers at Ohio Stadium on September 1, 2018 in Columbus, Ohio. (Photo by Jamie Sabau/Getty Images)</p>

SANTA CLARA, Calif. — For the fourth time in five years, the San Francisco 49ers took a defensive lineman with their first-round pick Thursday night, all in hopes of improving a pass rush that has been mediocre for several seasons. This time it’s Ohio State’s Nick Bosa, who hasn’t played since suffering a season-ending injury last September.

Bosa had 17 ½ sacks and 29 tackles for loss in 30 games with the Buckeyes. He played in only three games as a junior before suffering a core muscle injury that required surgery. Although there was speculation Bosa would return, he announced in mid-October that he would be concentrating on the draft.

Prior to getting hurt, Bosa had four sacks, 14 tackles, six tackles for losses and a forced fumble and was in the early Heisman Trophy conversations.

That came on the heels of his spectacular sophomore campaign when Bosa had eight sacks, 15 tackles for loss and was the Big Ten defensive lineman of the year despite starting only four of the 14 games he played.

The 49ers are hoping Bosa can upgrade a deficient pass rush.

Bosa does come with some baggage. He recently came under scrutiny for comments he made on Twitter regarding political and racial subjects. Bosa deleted some of them and told ESPN he did so because he might end up in San Francisco.