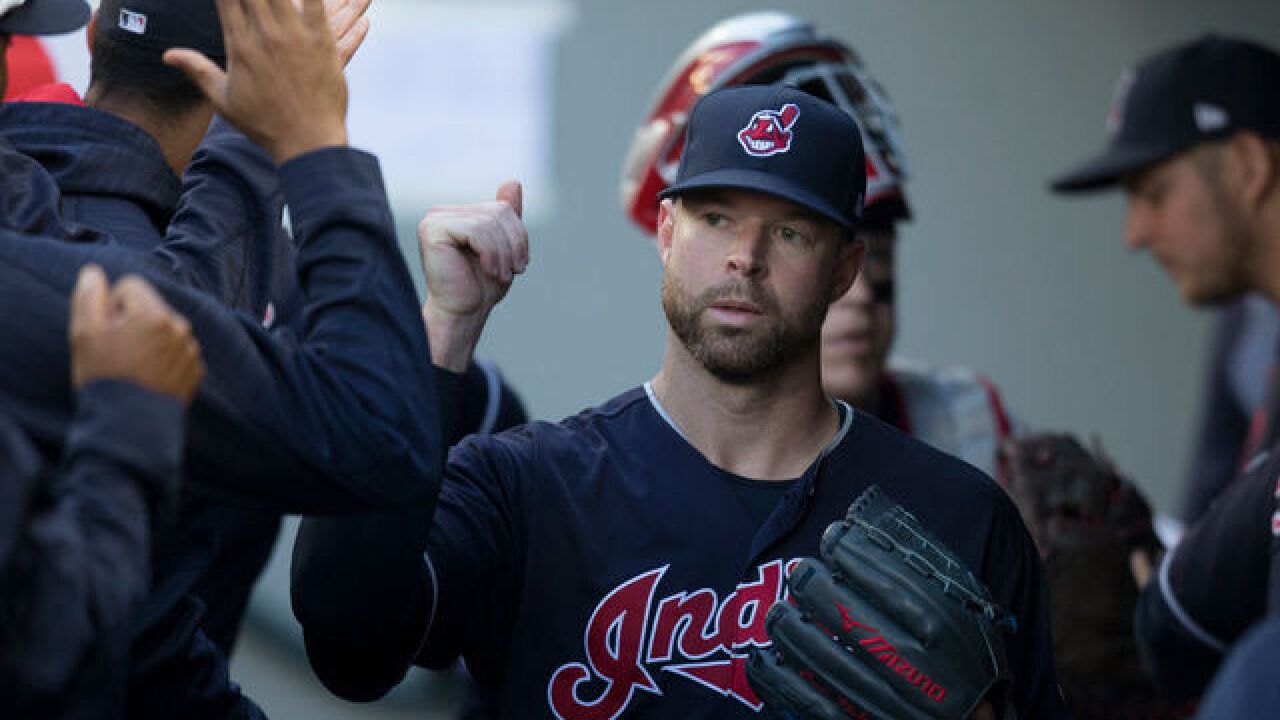 Copyright 2018 Scripps Media, Inc. All rights reserved. This material may not be published, broadcast, rewritten, or redistributed.
Stephen Brashear
SEATTLE, WA - SEPTEMBER 24: Starting pitcher Corey Kluber #28 of the Cleveland Indians is congratulated by teammates in the dugout after the seventh inning of a game against the Seattle Mariners at Safeco Field on September 24, 2017 in Seattle, Washington. The Indians won the game 4-2. (Photo by Stephen Brashear/Getty Images)

Max Scherzer heard his name and thrust his arms in the air, shouting and smiling big before turning to kiss his wife.

Corey Kluber, on the other hand, gulped once and blinked.

Two aces, two different styles -- and now another Cy Young Award for each.

The animated Scherzer of the Washington Nationals coasted to his third Cy Young, winning Wednesday for the second straight year in the National League. He breezed past Los Angeles Dodgers ace Clayton Kershaw, drawing 27 of the 30 first-place votes in balloting by members of the Baseball Writers' Association of America.

Kluber's win was even more of a runaway. The Cleveland Indians ace took 28 first-place votes, easily outpacing Chris Sale of the Boston Red Sox for his second AL Cy Young.

Scherzer yelled "yes!" when his award was announced on MLB Network, a reaction in keeping with his expressive reputation. He showed that intensity often this year, whether he was cursing under his breath like a madman during his delivery or demanding -- also with expletives -- that manager Dusty Baker leave him in the game.

Just a little different than the pitcher they call "Klubot." Kluber was stoic as ever when announced as the AL winner. He swallowed hard but otherwise didn't react, only showing the hint of a smile moments later when answering questions.

Not that he wasn't thrilled.

"Winning a second one maybe, for me personally, kind of validates the first one," Kluber said.

Scherzer's win moves him into rare company. He's the 10th pitcher with at least three Cy Youngs, and among the other nine, only Kershaw and Roger Clemens aren't in the Hall of Fame.

Scherzer earned the NL honor last year with Washington and the 2013 American League prize with Detroit.

"This one is special," he said. "When you start talking about winning three times, I can't even comprehend it at this point."

Scherzer was 16-6 with a career-best 2.51 ERA this year. The 33-year-old righty struck out a league-leading 268 for the NL East champion Nationals, and in an era noted for declining pitcher durability, he eclipsed 200 innings for the fifth straight season. He had to overcome a variety of ailments to get there, and Washington's training staff was high on his thank-you list.

"Everybody had a role in keeping me out on the field," he said. "I'm very thankful for all their hard work."

Kershaw has won three NL Cy Youngs and was the last pitcher to win back-to-back. He was 18-4 with a league-best 2.31 ERA and 202 strikeouts. This is his second runner-up finish. Stephen Strasburg of the Nationals finished third.

Kluber missed a month of the season with back pain and still easily won the AL award over Sale and third-place finisher Luis Severino of the New York Yankees. Kluber led the majors with a 2.25 ERA, and his 18 wins tied for the most in baseball. He added to the Cy Young he won with the Indians in 2014 and is the 19th pitcher to win multiple times.

The 31-year-old Kluber was especially dominant down the stretch, closing out the season by going 11-1 to help Cleveland win the AL Central. He and Minnesota's Ervin Santana tied for the major league lead with five complete games -- nobody else had more than two. Kluber also led the majors with 8.0 wins above replacement, per baseball-reference.com.

Scherzer said he couldn't even watch the League Championship Series, although he did tune in for the World Series.

"That will eat at me this whole offseason," he said.

Voting for the awards was completed before the postseason began.

The final BBWAA honors will come Thursday when the MVP awards are announced in the AL and NL.