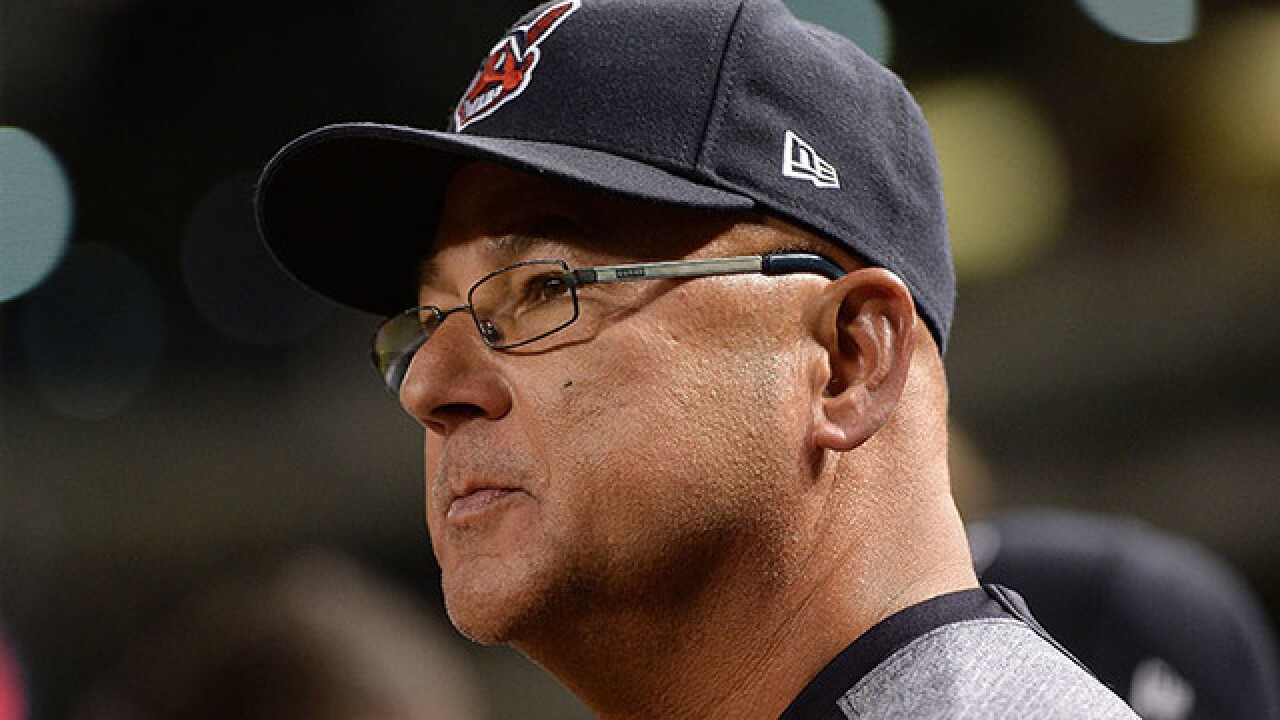 Copyright 2018 Scripps Media, Inc. All rights reserved. This material may not be published, broadcast, rewritten, or redistributed.
Jennifer Stewart
PHOENIX, AZ - APRIL 07: Manager Terry Francona #17 of the Cleveland Indians looks on from the dugout during the MLB game against the Arizona Diamondbacks at Chase Field on April 7, 2017 in Phoenix, Arizona. (Photo by Jennifer Stewart/Getty Images)

The Indians’ top infield prospect received a big surprise when he was invited to training camp on Monday after making a quick recovery following thumb surgery in October.

Jones, a left-handed slugging third baseman who has moved quickly through Cleveland’s minor league system, doesn’t have to hear any more taunts and teasing from his brother, Peyton, a Penn State goaltender likely headed to play in the NHL.

“My brother kept telling me I’m soft,” Jones said with a grin shortly after he was called into Indians manager Terry Francona’s office and welcomed. “I’m super excited. It is a huge opportunity to learn from the best players in the game. I get to be around a lot of these guys and get to know them.”

The thumb injury sustained in the Arizona Fall League marred a season in which Jones, the Indians’ second overall draft pick in 2016, was making more progress.

The 21-year-old was promoted to Double-A Akron in just his second full season. He played in the Futures game during the All-Star break and was named to the fall league’s All-Star squad before the thumb became too painful and he opted for reconstructive ligament surgery.

He became pain free about three weeks ago.

“There were some bumps along the way but I’m excited to be able to hit pain free,” Jones said. “It has been a long time with this pain in my hand. I’ve had some pain since the end of 2018. I found a way to deal with it, finding ways to hold my hands that hurt less.”

“It was funny. I thought he’d been told,” Francona said of the meeting. “You have so many conversations at the end of camp that are so hard. It was pure pleasure, just to see his eyes light up. You have to take a second to enjoy it because you don’t have enough of those moments.”

“To be around them, soak it in and ask a million questions, is a great opportunity,” Jones said. “When Johnny Mac (McDonald) told me that Tito wanted me, I just hoped that I wasn’t in trouble. He insisted that I have fun and soak everything in.”

Barring injuries, trades or a super spring, Jones is unlikely to be in Cleveland on opening day. But the invitation indicates that it won’t be long before he’s ready.

“I’ve heard so many good things about the kid from everybody,” Francona said. “For however long he’s here we want him to kind of be a sponge, watch how guys do things. I told him I don’t know how many at-bats he’s going to get. I hope he gets some hits because it’s fun to watch them but it won’t define him.

“I did tell him now that you’re where you are, you’re starting to bump up against the major leagues as the next step.”

NOTES: Francona said RHP Emmanuel Clase felt some discomfort in a side muscle, so the team is easing his workload the next few days. ... RHP Aaron Civale has a sore groin but is scheduled to throw a simulated game on Tuesday. ... OF Daniel Johnson has been dealing with a sprained ankle for a couple weeks. Francona said he’s at about 75 percent, but the team is being cautious and keeping him out of games.”