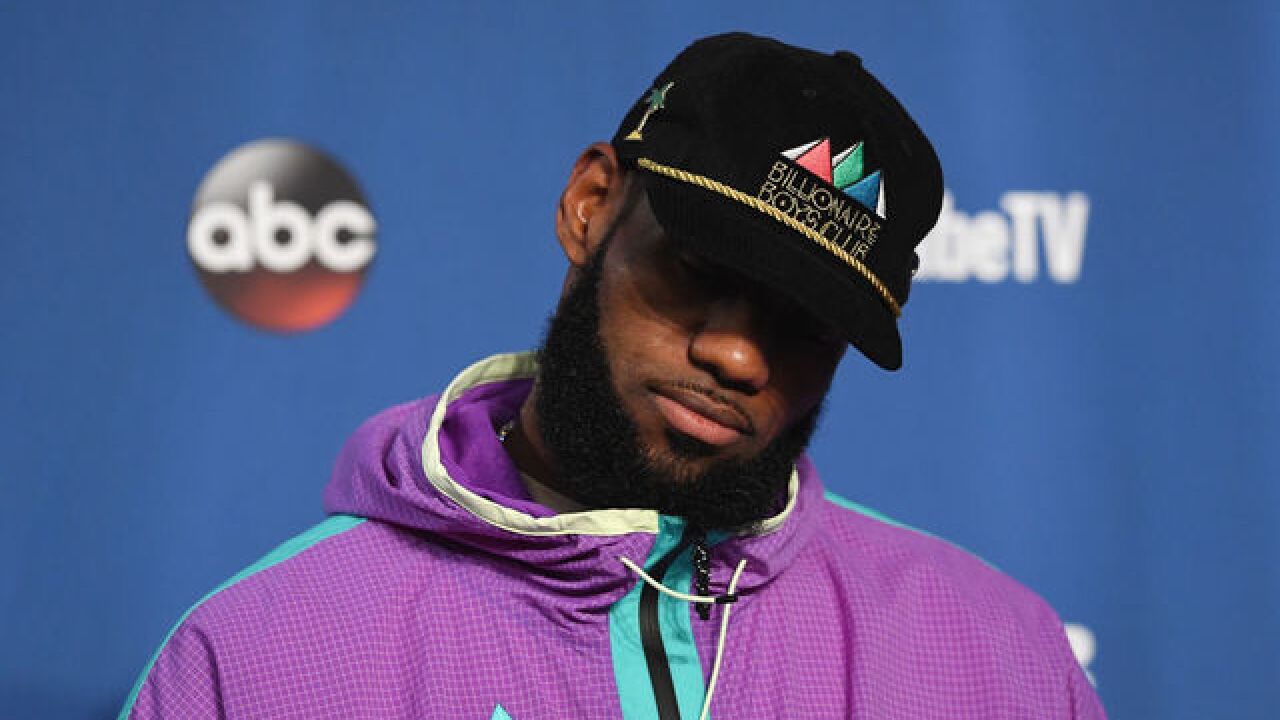 Image copyright 2018 Getty Images. All rights reserved. This material may not be published, broadcast, rewritten, or redistributed.
Jason Miller
<p>CLEVELAND, OH - JUNE 06: LeBron James #23 of the Cleveland Cavaliers speaks to the media after being defeated by the Golden State Warriors during Game Three of the 2018 NBA Finals at Quicken Loans Arena on June 6, 2018 in Cleveland, Ohio. The Warriors defeated the Cavaliers 110-102. NOTE TO USER: User expressly acknowledges and agrees that, by downloading and or using this photograph, User is consenting to the terms and conditions of the Getty Images License Agreement. (Photo by Jason Miller/Getty Images)</p>

They had their chances.

All of these events were downright ideal for the Cleveland Cavaliers: Stephen Curry’s shooting game was awful for most of the night, Klay Thompson’s wasn’t much better, the Cavs led by as many as 13 in the first half and some non-producers from the first two games of these NBA Finals were starting to finally give LeBron James the contributions he’s craved.

And it still wasn’t enough.

Another chance was wasted, and the season is now just about over.

Game 3 went down as a loss, and now the Cavaliers find themselves in the hole from which no NBA team has ever escaped. Golden State rallied to top Cleveland 110-102 on Wednesday night to take a 3-0 lead in the finals, with a chance to clinch their second straight championship Friday when this series resumes.

“It’s definitely a tough loss and we had our chances,” James said. “We have another opportunity on Friday to win on our home floor ... to extend the series. But we’ve got to come out and got to play 48 minutes.”

James was fantastic, again: 33 points, 10 rebounds and 11 assists. The Cavaliers rolled the dice and put Rodney Hood into the series, and got 15 points from him. Kevin Love had 20 points and 13 rebounds and J.R. Smith finished with 13 points, finally making some shots.

“Incredible, even by his standards,” Love said.

With Curry and Thompson non-factors much of the game, combining for 21 points on 7 for 27 combined shooting, Durant finished with a playoff career-best 43 points.

“We got stagnant,” Love said. “We were ultra-aggressive in that first half, myself included. But third quarters have kind of been our Achilles heel all year. ... I think that was mostly it.”

Game 1 of this series will be remembered by how Cleveland let it get away; the botched rebound by Smith to be forever played as one of those quintessential wish-you-had-it-back moments. Game 3 of this series will probably be remembered by how the Cavaliers, even with Curry missing 13 of his first 14 shots, dominated stretches of the first half and went into the locker room only up by six.

They were asking for trouble.

So this series is just about finished, or at least, that’s what the history books say. The 3-0 deficit has, until now, been insurmountable in NBA playoff annals. Not even the most optimistic Cleveland fan could expect that to change in the coming days.

The next two days will be angst-laden for Cleveland, though hardly anyone should be fretting the outcome of this series. The mystery is gone, and Golden State — which hasn’t lost four consecutive games in the same season since 2013, back when Mark Jackson was coaching the Warriors instead of calling their games on ABC and ESPN — needs only to avoid an apocalyptic collapse to win their third title in four years.

“That margin for error is so little, so thin against them, I think in some cases you have to be perfect,” Love said.

But a lot of the angst won’t be about the Warriors, it will be about James. Again.

Another “Summer of LeBron” could start as early as Friday night.

James can be a free agent, and there’s a real sense around the NBA that this summer — just like in 2010, when he left for Miami — could be packing up and leaving his native northeast Ohio once again. He has taken Cleveland to the NBA Finals now five times, and this now looks certain to be his fourth loss in those. He was 2-2 in four trips to the NBA Finals with Miami.

A bounce here, a couple stops there, the Cavs could be leading in these finals and the conversation would be different.

Instead, Cleveland is only left to wonder if James is a game from leaving. But he’s not going anywhere, even mentally, until this series is over.

“For me, tonight will be tough,” James said. “Tomorrow I’ll replay some plays and some moments, things of that nature. I’ll wake up Friday morning, I’ll be locked in on the game plan and what needs to be done to help our team win. That’s who I am.”