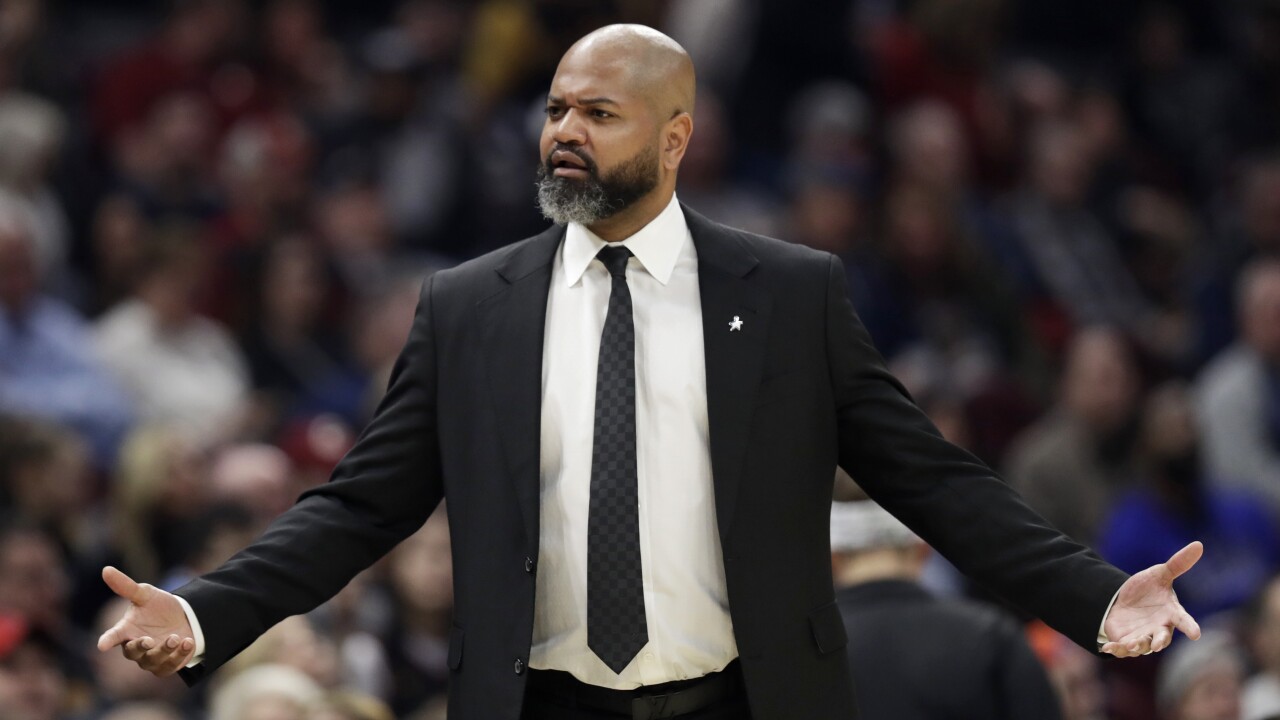 CLEVELAND — J.B. Bickerstaff’s impressive start with the Cavaliers has been rewarded.

Bickerstaff, who has Cleveland playing its best basketball this season since taking over when John Beilein suddenly resigned last month, agreed to a multi-year contract with the team on Tuesday.

The Cavs announced the deal with Bickerstaff shortly before their game in Chicago, where they started a six-game trip.

Although they still have one of the NBA’s worst records, the Cavs have shown major improvement in a short period under Bickerstaff. They’re 5-5 going into Tuesday’s game against the Bulls and the Cavs have had more energy and exhibited more togetherness than at any time for Beilein.

Bickerstaff was promoted after Beilein stepped down after 54 games in his first season. He had been serving as an associate head coach under the 67-year-old Beilein, who cited personal health issues as one of his reasons for leaving a job he thought he was ready to handle.

“We are very fortunate to have someone of J.B.’s caliber and basketball pedigree lead our franchise as head coach,” said general manager Koby Altman. “His wealth of experience, coupled with the respect he has garnered around the NBA and with this team, has made for a seamless transition from associate head coach to head coach.

“The amount of grit and determination instilled in our players, from both an accountability and attention to detail standpoint over this short period of time, has been met with admiration, respect and overall excitement throughout our entire locker room. We have already observed the impact he has made on our players through his first 10 games as head coach and we are looking forward to seeing just how far he can effectively drive our developing culture and lead this franchise into the future.”

Over the weekend, the Cavs won consecutive tight games over Denver and San Antonio. Earlier this season, the club’s inexperience would cripple the Cavs in the closing minutes of games. Cleveland has also won three games against teams with over .500 records and the Cavs have improved their scoring and assist totals.

The 41-year-old Bickerstaff previously coached in Houston and Memphis before coming to Cleveland. He led the Rockets to the playoffs in 2015-16.

“Our players have done a phenomenal job of maintaining a high level of professionalism and growing maturity, of which I have been very appreciative,” Bickerstaff said. “I also take great pride and consider it an honor and privilege to live and coach in this community with my family, in front of this fan base and for this franchise. It has truly been a blessing and I look forward to the journey ahead.”

Bickerstaff was always seen as the eventual successor to Beilein, but he never expected things to move so quickly. Bickerstaff did not get the “interim” tag when he replaced Beilein, a sign that the Cavs were comfortable with the plan Altman hatched when he interviewed Bickerstaff last summer.

Cleveland’s players seem more relaxed under Bickerstaff, whose father, Bernie, was a longtime NBA coach and currently advises for the Cavs. The younger Bickerstaff worked in the past with Cavs star forward Kevin Love, who has played well lately.

Following Sunday’s win over the Spurs, Bickerstaff said the Cavs are bonding and making the most of a season once spiraling downward.

“They just keep pulling for one another and they celebrate other people’s success,” Bickerstaff said. “I think that’s a core value of a good team. That’s where we’re building. It’s fun to watch how they treat each other, how they respect one another. When a guy’s got it going, they’re willing to give up the ball and give themselves up for that guy. It’s part of the environment we’re trying to create.

“There’s a camaraderie, there’s a bond, there’s a common goal of the way that we’re playing. No one person is bigger than the team. You can see by different nights who contributes, there’s no pouting if it’s not your night. It’s all about the team. I think that’s the biggest difference.”