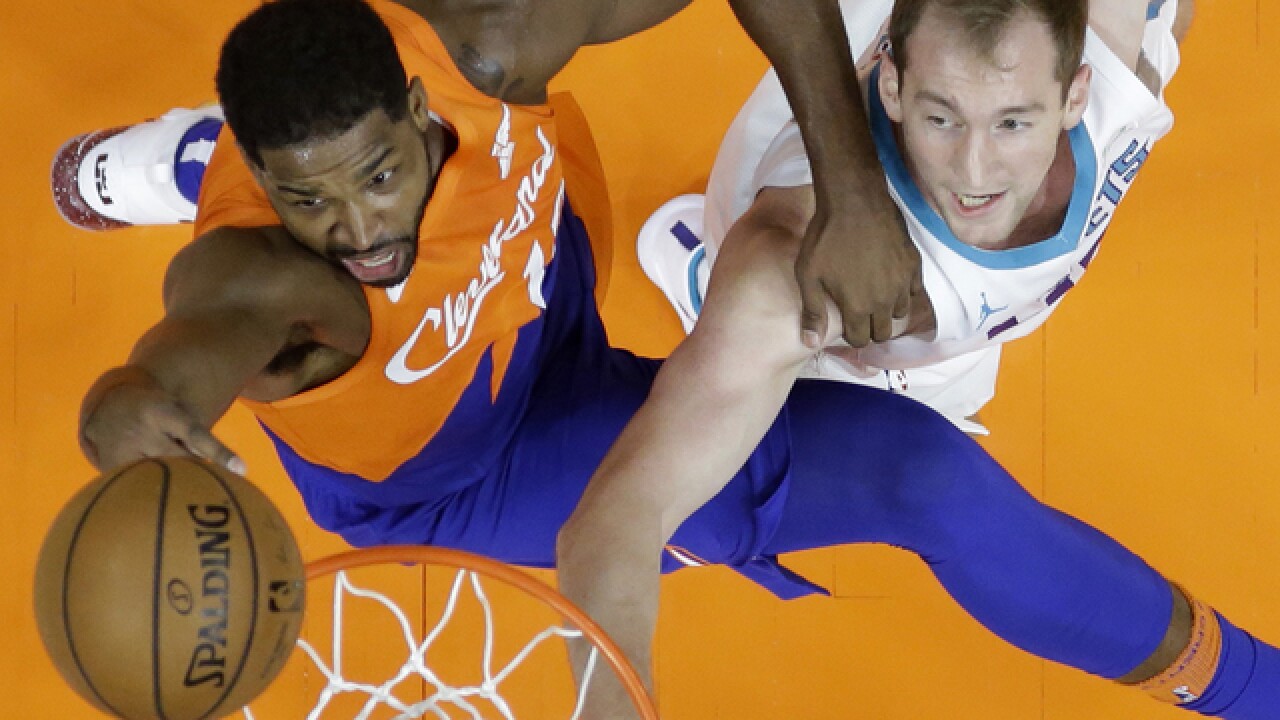 Copyright 2018 Scripps Media, Inc. All rights reserved. This material may not be published, broadcast, rewritten, or redistributed.
Tony Dejak
<p>Cleveland Cavaliers' Tristan Thompson, left, drives to the basket against Charlotte Hornets' Cody Zeller in the first half of an NBA basketball game, Tuesday, Nov. 13, 2018, in Cleveland. (AP Photo/Tony Dejak)</p>

Jordan Clarkson scored 24 points, Tristan Thompson had 21 rebounds and 11 points, and the injury-riddled Cleveland Cavaliers won for the second time this season, beating the Charlotte Hornets 113-89 on Tuesday night.

Kemba Walker, the league’s third-leading scorer, was held to a season-low seven points and was 2 for 16 from the field. The Hornets star guard was averaging 27.9 points going into the game.

Rodney Hood scored 16 points for Cleveland, which built a double-figure lead midway through the first quarter and maintained that the rest of the game. Rookie point guard Collin Sexton scored 16 points and had five assists. David Nwaba scored 18 points off the bench.

Jeremy Lamb scored 22 points for Charlotte. The Hornets were 33 for 95 from the field and hit 8 of 41 of their 3-point attempts.

Cleveland has seen its injury list get longer while the losses piled up. Forwards Kyle Korver (sore right foot) and Cedi Osman (back spasms) didn’t play Tuesday and are the most recent additions.

The Cavaliers are only a month into the season, but even holding practice is a challenge. Coach Larry Drew said one of the Cavaliers’ assistant coaches had to fill in at Monday’s session so the team could scrimmage because only nine healthy players were available.

The Hornets cut the lead to 78-67 in the third quarter, but scored two points over the final five minutes of the period. J.R. Smith and Nwaba helped Cleveland maintain the momentum by hitting 3-pointers on back-to-back possessions.

The Cavaliers built the lead to 25 points in the fourth quarter.

Hornets: Walker, an 87 percent shooter, missed two free throws in a trip to the line midway through the second quarter. ... F Michael Kidd-Gilchrist (sprained right ankle) did not play after being injured Sunday at Detroit. He’s averaging 8.6 points in 13 games off the bench. ... F Dwayne Bacon entered the rotation in his spot.

Cavaliers: Love had surgery Nov. 2 and is still wearing a walking boot on his left foot. .... Korver doesn’t believe his injury is serious and said that he’d be surprised if he isn’t ready play when the Cavaliers visit Detroit on Nov. 19. .... The 37-year-old Korver has been bothered by foot injuries the past two seasons. ... Drew said Osman likely will miss his third straight game Wednesday.