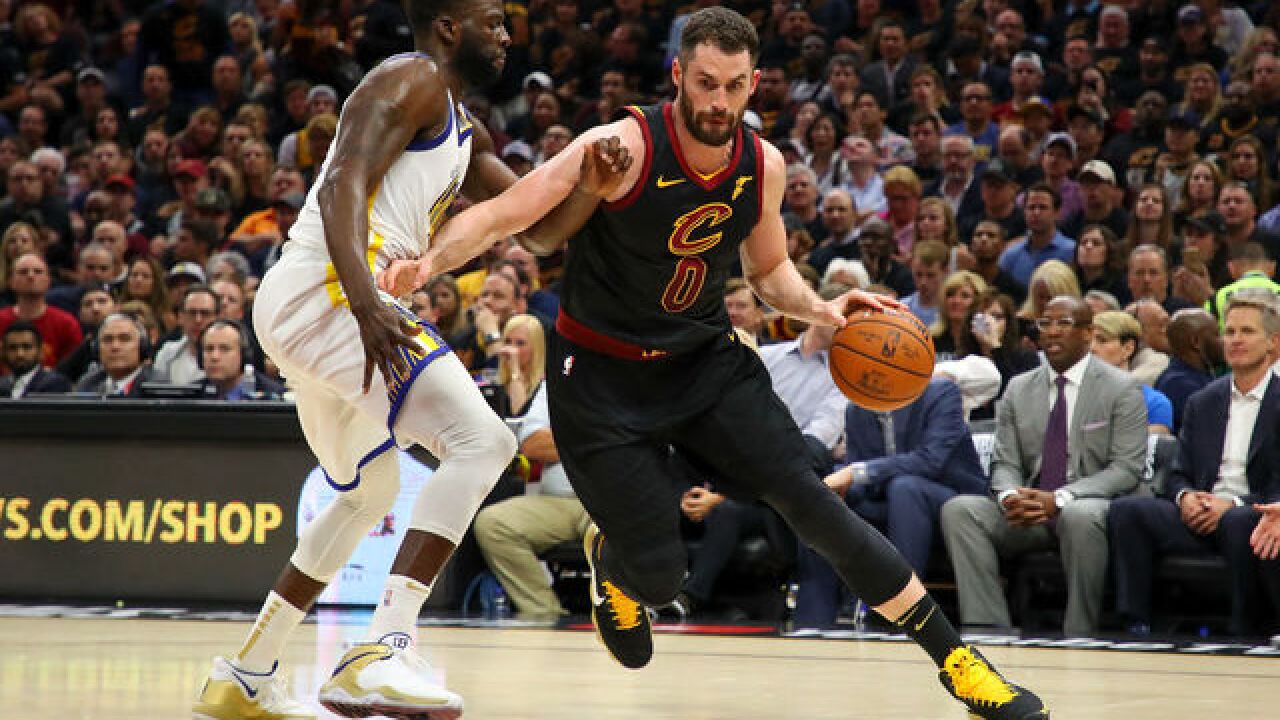 Image copyright 2018 Getty Images. All rights reserved. This material may not be published, broadcast, rewritten, or redistributed.
Gregory Shamus
<p>CLEVELAND, OH - JUNE 08: Kevin Love #0 of the Cleveland Cavaliers drives to the basket against Draymond Green #23 of the Golden State Warriors during Game Four of the 2018 NBA Finals at Quicken Loans Arena on June 8, 2018 in Cleveland, Ohio. NOTE TO USER: User expressly acknowledges and agrees that, by downloading and or using this photograph, User is consenting to the terms and conditions of the Getty Images License Agreement. (Photo by Gregory Shamus/Getty Images)</p>

Cleveland is feeling the love after All-Star player Kevin Love announced he is signing a four-year, $120 million contract extension, according to the Cavs.

Love opted out of the 2019-20 season on his current five-year deal.

The Cavs arranged an impromptu signing ceremony for Love at the Quicken Loans Arena on Tuesday.

With Paul George breaking out on stage on July 1 & now Kevin Love signing his extension in front of construction workers & team employees in an impromptu ceremony on a piece of drywall, I look forward to the next in this trend.

Since LeBron James announced his departure from the team, Dan Gilbert and GM Koby Altman have been pushing to keep their star player for a long-term deal with the team.

“We are very excited to announce Kevin’s long-term commitment to the Cavaliers and Cleveland," Altman said in a release. "This quickly became a partnership the second we began these discussions. Collaboration and winning matter greatly to Kevin and that was reflected in this extension,” said Altman. “Kevin’s talent and character are both at a very high level and he has earned his role at the center of what we want to do moving forward. As a five-time All-Star and NBA Champion, Kevin has a special understanding of exactly what success and winning require.”

He came to Cleveland as part of a trade deal prior to the 2014 season—making the Eastern Conference Finals in each of the past two seasons.

“When I first came to Cleveland, I came with a long-term mindset,” said Love in a press release. “I came here to win. We developed a culture here that reflects that. I’m super excited and I couldn’t be happier. It’s a big commitment for me and it’s a big commitment from the Cavaliers, so I want to thank Dan Gilbert, Koby Altman and the entire organization. I enjoy playing here, I’m excited about the team that we have and look forward to our future together. Cleveland fans have been special from day one and I’m also looking forward to continuing to be a part of this great community.”

Larry Nance Jr., fresh off his wedding in Hawaii, attended Kevin Love's signing today. Nance is next up on the Cavs extension priority list.