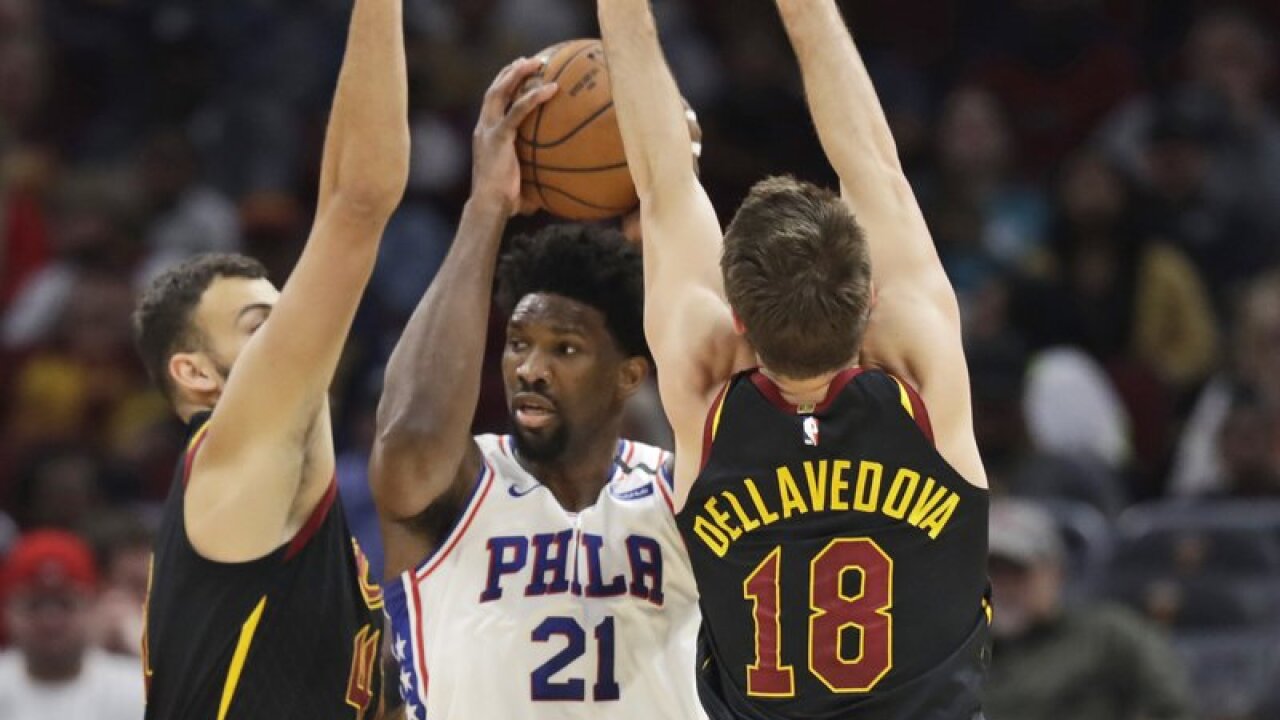 CLEVELAND — Collin Sexton scored 28 points and the Cleveland Cavaliers routed Philadelphia 108-94 on Wednesday night after 76ers center Joel Embiid left in the first quarter because of a sprained left shoulder.

The 76ers, already playing without All-Star guard Ben Simmons, never led against the team with the worst record in the Eastern Conference and fell to 9-21 on the road.

Embiid collided with Cavaliers center Ante Zizic while being fouled late in the first quarter. The 7-footer held his shoulder in obvious pain but stayed in the game and missed both free throws.

The Sixers pulled Embiid at the next time stoppage and he walked to the locker room while rubbing his shoulder. He briefly returned to the bench in the second quarter, but went back for more evaluation and treatment. At halftime, Embiid rejoined his teammates on the bench with a wrap on his injured shoulder.

Tristan Thompson had 14 points and 13 rebounds, and Larry Nance Jr. had 13 points for Cleveland.

Jaylen Brown added 20 points and Marcus Smart had 17 for Boston. All five starters scored in double figures to help the Celtics finish 3-1 on a road trip out West.

Donovan Mitchell scored 37 points to lead Utah. Mike Conley chipped in with 15 and Royce O’ Neale added 14 for the Jazz, who lost their fourth straight game — all at home.

HOUSTON (AP) — Russell Westbrook scored 33 points, James Harden had 30 and Houston sailed past Memphis for its fifth straight win, 140-112 over the Memphis Grizzlies on Wednesday night.

Harden say out the fourth quarter. Westbrook sat down for good with about six minutes left.

Dillon Brooks had 22 points for Memphis. They went 0-4 on their longest trip of the season.

Malik Beasley scored 21 points, Juancho Hernangomez tied a season-high with 17 and McLaughlin added 13 for Minnesota. The Timberwolves were down by 12 with 3:59 left, then closed on a 20-5 run to get just their second victory in 20 games.

Bradley Beal led the Wizards with 30 points after consecutive games of 53 and 55 points.

Caris LeVert had 34 points for Brooklyn.

Solidifying their hold on the final playoff spot in the East, the Magic put away the Hawks with a 14-5 spurt after Trae Young’s drive cut Orlando’s lead to five with 6:20 remaining.

The slumping Devonte Graham returned from a team-mandated night off to add 21 points.

Julius Randle had 18 points and nine rebounds for New York.

It was a disappointing start to a six-game homestand for Phoenix, which is among several teams fighting for the eighth and final playoff spot in the West.

Deandre Ayton led the Suns with 25 points and 17 rebounds. All-Star guard Devin Booker had a rough night, scoring 14 points on 5-of-19 shooting. Phoenix shot just 39% from the field.