It's over: LeBron signs a four-year, $154 million contract with the Los Angeles Lakers 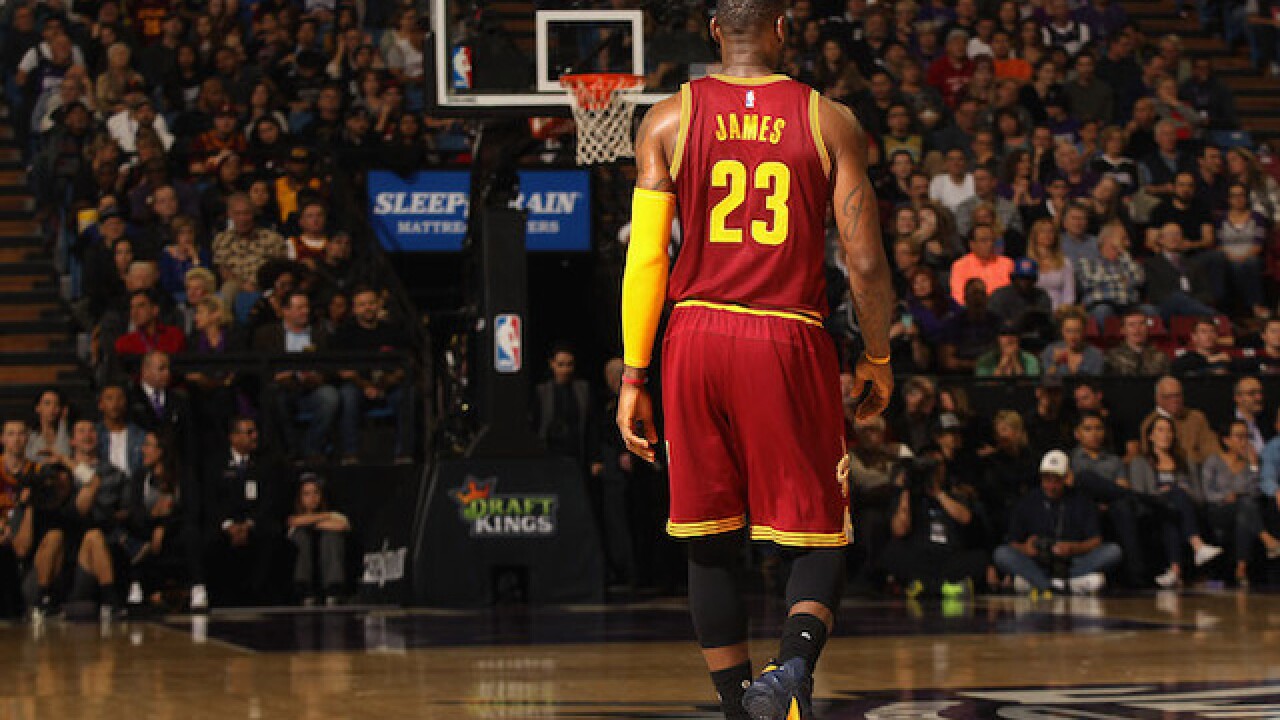 Copyright 2018 Scripps Media, Inc. All rights reserved. This material may not be published, broadcast, rewritten, or redistributed.
Ezra Shaw
SACRAMENTO, CA - MARCH 09: LeBron James #23 of the Cleveland Cavaliers stands on the court during their game against the Sacramento Kings at Sleep Train Arena on March 9, 2016 in Sacramento, California. NOTE TO USER: User expressly acknowledges and agrees that, by downloading and or using this photograph, User is consenting to the terms and conditions of the Getty Images License Agreement. (Photo by Ezra Shaw/Getty Images)

LeBron James is signing with the Los Angeles Lakers, leaving the Cleveland Cavaliers for the second time to join one of the NBA’s most iconic franchises.

James’ agency made the announcement Sunday in a release, saying he has agreed to a four-year, $154 million contract. The game’s best all-around player and biggest star will now lead a young Lakers team that has been overmatched in recent years while rebuilding but will instantly rise with James.

Los Angeles also provides James with a larger platform for his business interests and social activism.

This is the third time in eight years James has changed teams. He returned to the Cavs in 2014 after four seasons in Miami.

The 33-year-old had previously said he wanted to finish his career in Ohio, and although he’s leaving home again, Cleveland fans are more forgiving after he ended the city’s 52-year sports championship drought in 2016.

Shortly after the announcement, which came in a surprising manner, James posted a three-photo tribute to Cleveland fans on his Instagram account.

“Thank you Northeast Ohio for an incredible four seasons,” James wrote. “This will always be home.”

But there will always be a portion of Cleveland fans disappointed that James left again and that he wouldn’t give the Cavs a longer commitment. His deal with the Lakers is his longest since he signed for six years with Miami in 2010.

James informed the Cavs on Friday that he was not exercising his $35.6 million option and becoming a free agent. While in Los Angeles following a family vacation, he spoke to Cavs general manager Koby Altman moments after free agency opened on Sunday, and it appears that was more a courtesy than a chance for Cleveland to make one last pitch.

The decision to join the Lakers was not a surprise to his innermost circle, with one person telling AP that it had been presumed for some time that he was headed to Los Angeles next season. The person spoke on condition of anonymity because no one authorized that detail be released publicly.

James gave Cleveland something to remember in his final season. He played in all 82 regular-season games and then somehow carried a team that underwent several transformations to a fourth straight conference title and matchup against the Warriors.

As has been the case in the past, James didn’t have enough help as the Cavs were swept, dropping him to 3-6 in the NBA Finals — a record sometimes used to compare him to Michael Jordan.

His stay with the Cavaliers will best be remembered for 2016, when he rallied the Cavs from a 3-1 deficit in the finals to stun the Warriors. James helped seal a Game 7 win with a chase-down block of Andre Iguodala, the signature moment of a career that has shown no signs of decay.

With the Lakers, James will be playing in the Western Conference for the first time and just down the Pacific Coast Highway from the Warriors, the team that has stymied him three times in the past four finals.
The chance to play for one of America’s most storied franchises was appealing to James, who prides himself on knowing the game’s history. In Los Angeles, championships are the standard and he’ll feel new pressure in upholding the legacies of Johnson, Bryant, Kareem Abdul-Jabbar, Jerry West and other Lakers greats.