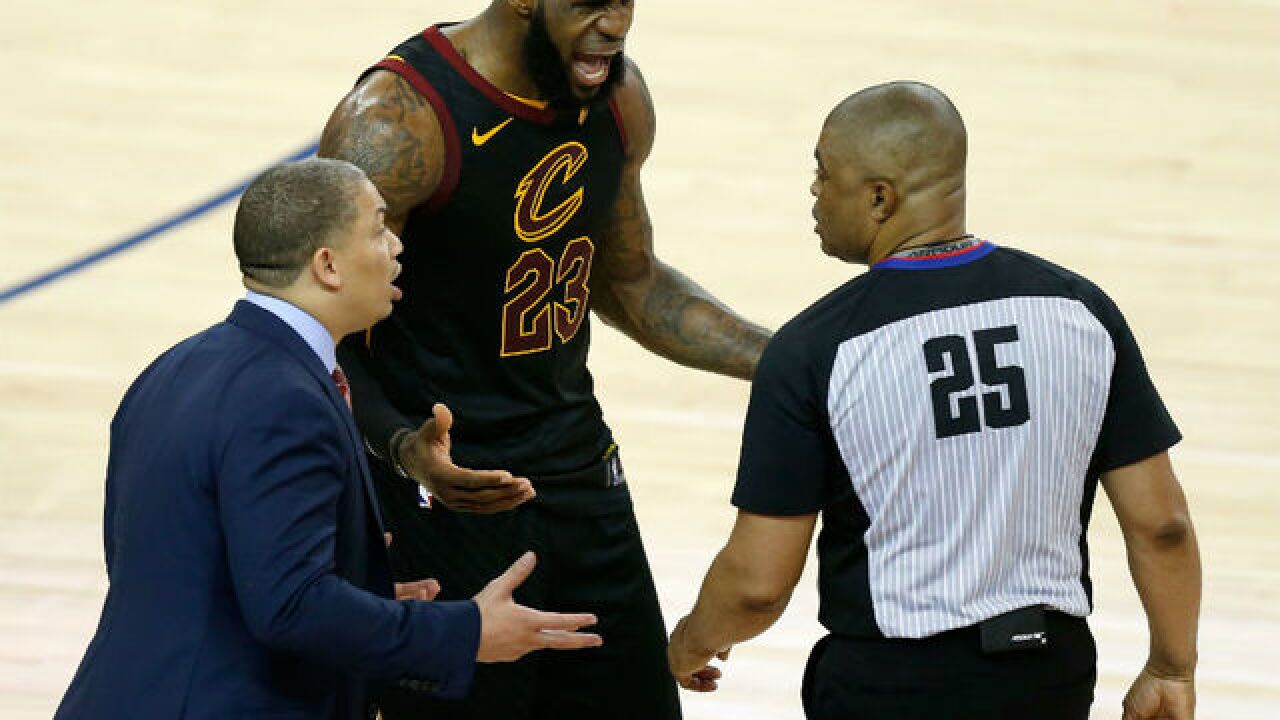 Copyright 2018 Scripps Media, Inc. All rights reserved. This material may not be published, broadcast, rewritten, or redistributed.
<p>LeBron James and Cavs head coach Tyronn Lue argue with referee Tony Brothers in Game 1 of the NBA Finals at ORACLE Arena on May 31 in Oakland. (Photo by Lachlan Cunningham/Getty Images)</p>

CLEVELAND – From a controversial Game 1 call to discussion of possible future coaching challenges, NBA referees have certainly been a storyline of the NBA Finals.

So the fact that NBA referees will take to Twitter for tonight’s Game 3 is certainly an interesting twist, especially if you are a Cavaliers fan.

A team of refs, who will not be identified individually, will answer questions in real time to address specific plays and interpret rules with fans from the @OfficialNBARefs account. The hashtag is #RefWatchParty.

The National Basketball Referees Association has organized the Twitter discussion, and the NBA league office is not part of this event, according to ESPN’s Brian Windhorst .

The referees working the NBA Finals have 254 total years of NBA experience and a combined 75 Finals appearances, according to the NBRA.

The Warriors, which lead the series 2-0, were the beneficiary of a controversial block/charge call in the final minute of Game 1 .

The Cavs led by two after rallying from being down six late in the fourth quarter. The Warriors’ Kevin Durant drove to the basket against the Cavs' Jeff Green. On the drive, Durant collided with LeBron James in the lane. The refs called a charge on Durant. Then they reversed the call on the replay.

"The reason for the trigger is that we had doubt as to whether or not James was in the restricted area," officiating crew chief Ken Mauer told ESPN following the game .

"LeBron was clearly 4 feet outside the restricted area," Lue said. "So it doesn't make sense to go review something if -- the review is if he's on the line or if he's close to the charge circle, that's the review. He wasn't close."

One day soon Lue and other NBA coaches may be able to reverse a call.