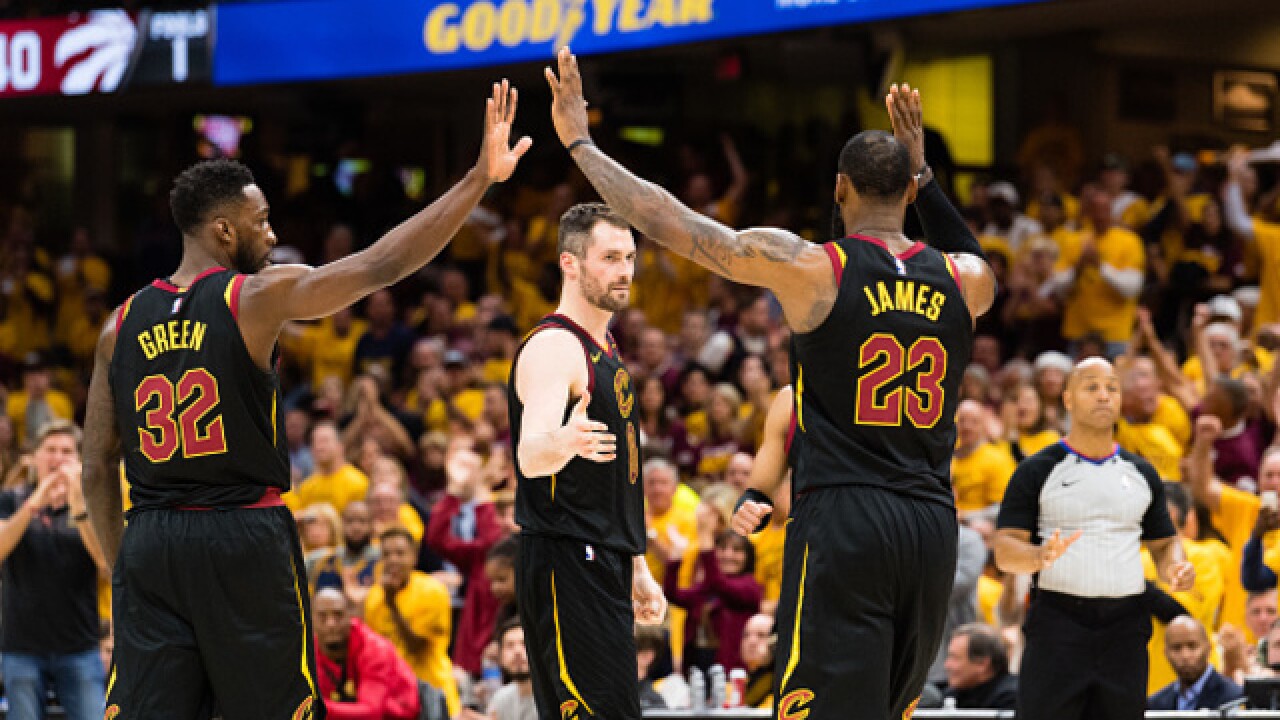 Copyright 2018 Scripps Media, Inc. All rights reserved. This material may not be published, broadcast, rewritten, or redistributed.
Jason Miller
<p>CLEVELAND, OH - MAY 7: Jeff Green #32, Kevin Love #0 and LeBron James #23 of the Cleveland Cavaliers celebrate during a timeout against the Toronto Raptors during the first half of Game 4 of the second round of the Eastern Conference playoffs at Quicken Loans Arena on May 7, 2018 in Cleveland, Ohio. NOTE TO USER: User expressly acknowledges and agrees that, by downloading and or using this photograph, User is consenting to the terms and conditions of the Getty Images License Agreement. (Photo by Jason Miller/Getty Images)</p>

The franchise with the most titles. The best player of this generation. The reigning champions. The probable MVP.

The NBA has its Final Four.

It certainly does not disappoint.

Boston's win over Philadelphia on Wednesday night brought down the curtain on the postseason's second round -- one that wasn't exactly loaded with drama, since it was the first time since 2002 that none of the NBA's four conference semifinal series went past five games. Cleveland swept Toronto, while Houston, Golden State and the Celtics all prevailed by 4-1 counts.

Everyone gets to catch their collective breaths for a few days, with the league going dark until the weekend. Cleveland and Boston don't tip off the Eastern Conference finals until Sunday, and the Warriors and Rockets start their West title series on Monday. And yes, the Cavaliers and Warriors are four wins away from a fourth consecutive meeting in the NBA Finals.

A few things to know going into the conference finals:

Any list of anything this time of year basically has to start with LeBron James, still generally considered the best player on the planet even at 33 years old and in his 15th NBA season.

Cleveland's star is trying to reach the NBA Finals for the eighth consecutive season -- something only four other players have done, and they were all Boston Celtics. Bill Russell went to 10 straight title series, Sam Jones and Tom Heinsohn went to nine, and Frank Ramsey went to eight.

This is the eighth time Cleveland and Boston have met in the postseason. Boston has won four of the previous seven meetings, but Cleveland has won the last two -- including the East finals last season.

This is only the third Golden State-Houston playoff meeting, and all have come in the last four seasons. The Warriors are 2-0 in the series, winning both times in five games -- the 2015 West finals and a first-round matchup in 2016.

Golden State is trying to reach the NBA Finals for the 10th time, a mark that two other franchises have reached. The Los Angeles Lakers have made The Finals on 31 occasions (winning 16 titles), and the Celtics have gone 21 times (winning a league-high 17 titles).

If the Warriors successfully defend their NBA title and go back-to-back, it'll be the franchise's sixth time as the last team standing -- and would tie Chicago for the third-most championships in league history, behind the Celtics and Lakers.

Houston's James Harden seems like the probable winner of the NBA's MVP award this season, with the only other realistic candidate for top honors probably LeBron James.

They won't know who won until June 25 -- after the season.

Regardless, they could wind up adding to a recent trend.

The league MVP has played in the NBA Finals in four of the last six seasons -- James and the Miami Heat won titles in 2012 and 2013, Stephen Curry and the Warriors won in 2015 and lost to Cleveland in 2016.

Ray Allen is still the league's all-time leader in playoff 3-pointers made, with 385.

LeBron James and Stephen Curry are coming his way.

Here's how the NBA season began, back on Oct. 17: Boston at Cleveland, and Houston at Golden State.

Winning Game 1 of any NBA playoff series is important; under this format that the league has been using since 1984, teams that take 1-0 series leads ultimately win those matchups about 80 percent of the time.

That's even more pronounced in this round.

Of the 68 teams that have taken 1-0 series leads in the conference finals, 57 have gone on to make the NBA Finals. But four times in the last seven years, a team has dropped Game 1 in this round and made The Finals anyway.

The NBA Finals start May 31.

That means there could be a lot of days without basketball before then.

Starting Thursday, there will be no games five times in a nine-day span. There's no games until Sunday, and there's no games in either series on May 17 and 18. Those needing a basketball fix on those last two days, fret not -- there will be NBA Combine activities going on in Chicago on those two days.

The NBA's playoff pool for this season is $20 million, and here's a look at how much the four remaining teams have made so far in this postseason -- along with a look at what they could get.

Teams use the playoff pool largely for bonuses for players and staff after the season. The 12 playoff teams that have already been eliminated will be getting checks adding up to about $7 million from the league.