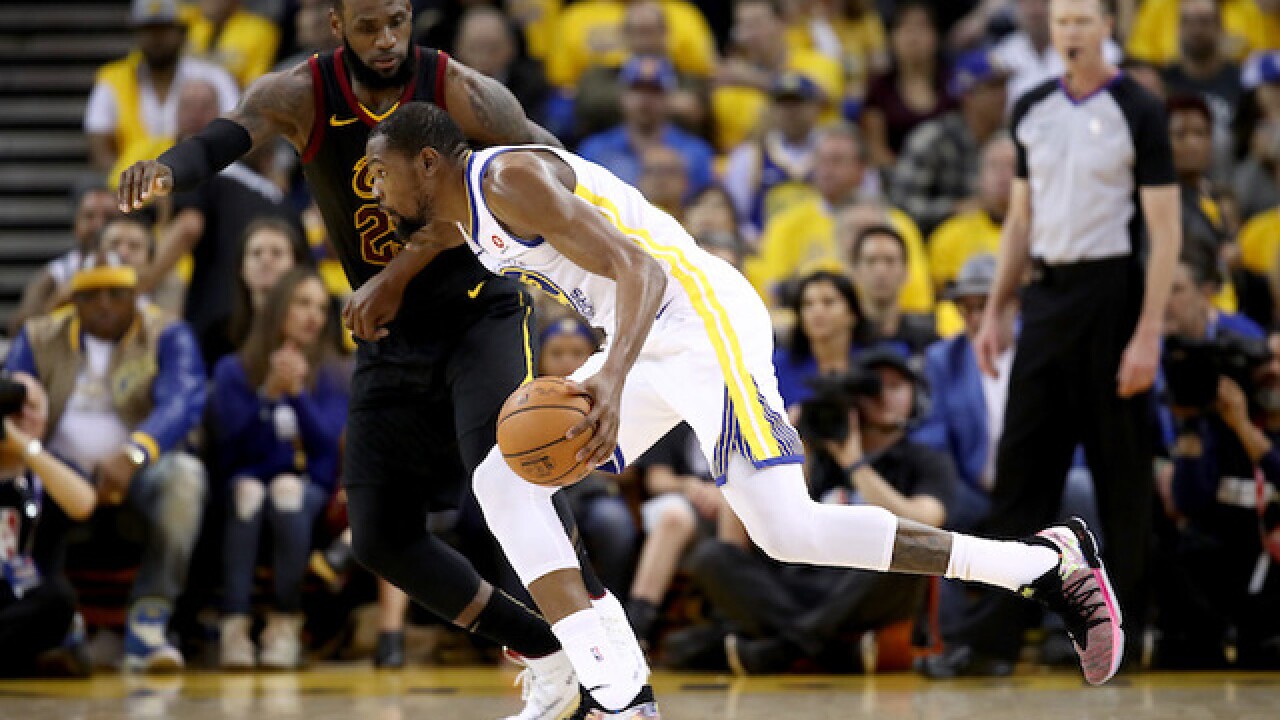 Copyright 2018 Scripps Media, Inc. All rights reserved. This material may not be published, broadcast, rewritten, or redistributed.
Ezra Shaw
<p>OAKLAND, CA - MAY 31: Kevin Durant #35 of the Golden State Warriors drives to the basket defended by LeBron James #23 of the Cleveland Cavaliers in Game 1 of the 2018 NBA Finals at ORACLE Arena on May 31, 2018 in Oakland, California. NOTE TO USER: User expressly acknowledges and agrees that, by downloading and or using this photograph, User is consenting to the terms and conditions of the Getty Images License Agreement. (Photo by Ezra Shaw/Getty Images)</p>

Third Quarter
The Warriors, as they always do, came out hot in the third quarter. The Cavs, as they too often do, came out cold. But LeBron kept the Cavs in it, and he's having one of his finest Finals performances from the field, with 36 points through three quarters.

This one's going to have an exciting finish.

First Half
On the road, facing staggering odds , the Cavs opened the first half of Game 1 of the NBA Finals playing like a team with nothing to lose. Which is what they are. LeBron, looking spry, made his first six shots, and the rest of the supporting cast looked sharp as the Cavs took an 11-point lead before letting Golden State back in the game late in the second quarter.

The Warriors suffered a bigger scare. Klay Thompson left the game in the first quarter  after J.R. Smith accidentally slid into his legs while chasing down a pass. The Warriors are already shorthanded with Andre Iguodala out. Smith, who did not slide intentionally, was booed by the Golden State crowd. Thompson suffered a left lateral leg contusion, according to the Warriors. He reentered the game in the second quarter.