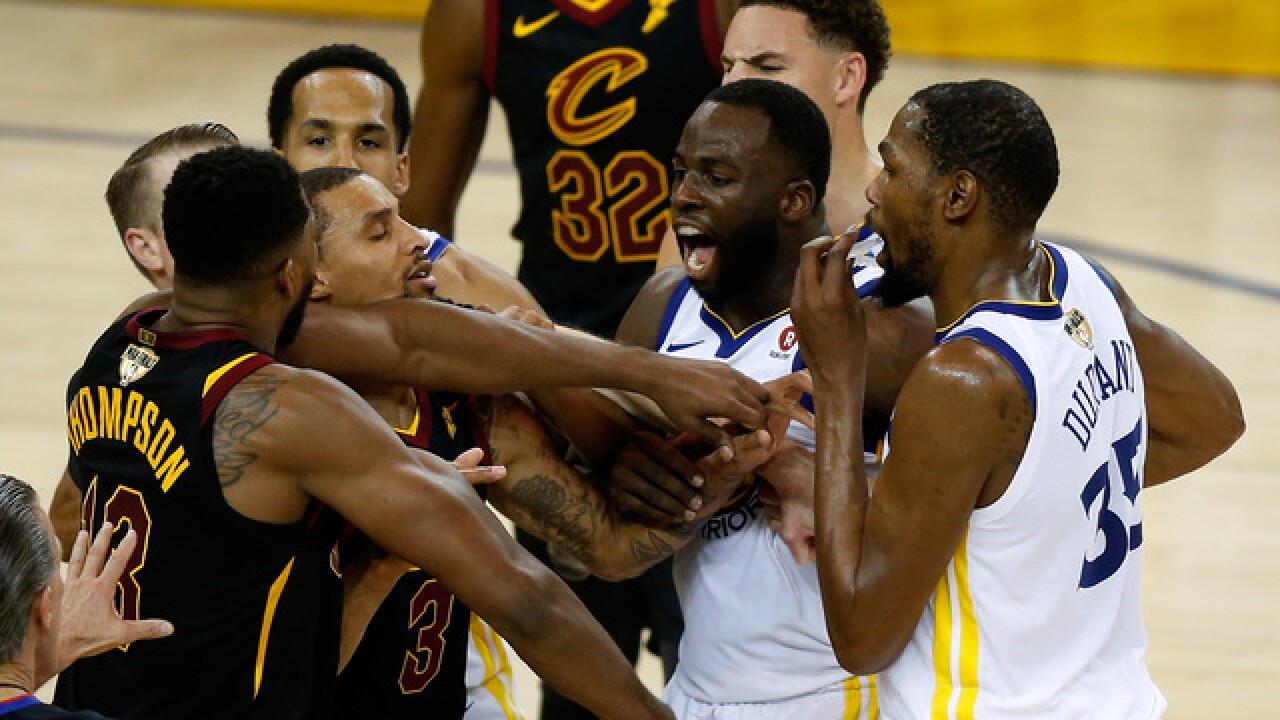 Copyright 2018 Scripps Media, Inc. All rights reserved. This material may not be published, broadcast, rewritten, or redistributed.
Lachlan Cunningham
<p>OAKLAND, CA - MAY 31: Tristan Thompson #13 of the Cleveland Cavaliers and Draymond Green #23 of the Golden State Warriors exchange words in overtime during Game 1 of the 2018 NBA Finals at ORACLE Arena on May 31, 2018 in Oakland, California. NOTE TO USER: User expressly acknowledges and agrees that, by downloading and or using this photograph, User is consenting to the terms and conditions of the Getty Images License Agreement. (Photo by Lachlan Cunningham/Getty Images)</p>

Tristan Thompson has been fined $25k by the NBA for his role in an altercation towards the end of overtime in Game 1 of the NBA Finals.

The league has also downgraded his flagrant 2 foul that got him ejected to a flagrant 1.

The fine was for failing to leave the court in a timely manner and shoving a ball into the face of Golden State Warriors' Draymond Green, ESPN reports.

It started when Shaun Livingston took a shot with 2.6 seconds left on the clock with the game out of reach when Thompson fouled him.

COMMENTARY: Leon Bibb on the Cavs and 'Whatever it Takes'

"I contested a shot that shouldn't have been taken," Thompson said. "I mean, it's like the unspoken rule in the NBA: If you're up 10 or 11 with about 20 seconds left, you don't take that shot. I make the contest, and next thing I know, I was being kicked out for a good contest that we learn in training camp. I don't know why I got thrown out."

"I say that we don't take the turnover. I don't take the turnover," Livingston told ESPN. "Kevin threw me the ball, and he threw it to me like we were still playing. JR [Smith] was still guarding him, you know. No disrespect. We just play the game. So that's what it was. ... It's the Finals. It's all love. ... It was like a YMCA pickup game in the last 30 seconds."

Frustrations were high in the overtime period for the Cavs, as there were opportunities to put the Warriors away in regulation.