LeBron will probably end up with one of these five teams 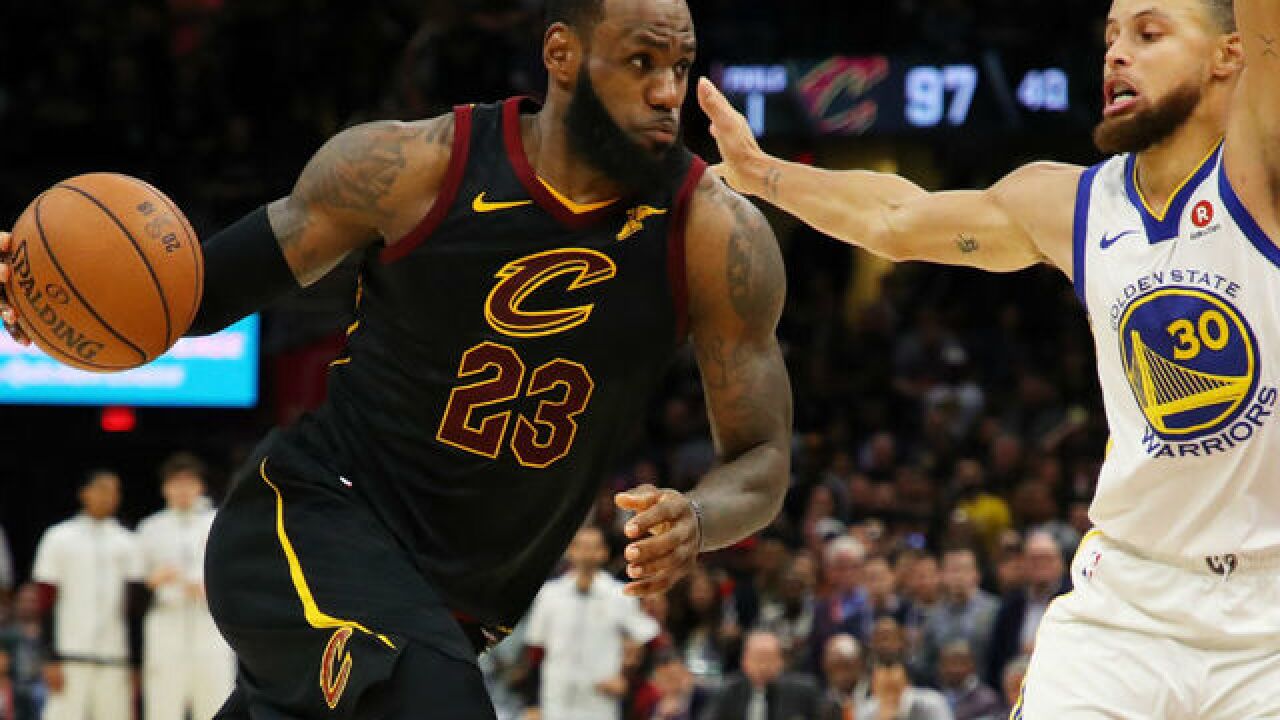 Copyright 2018 Scripps Media, Inc. All rights reserved. This material may not be published, broadcast, rewritten, or redistributed.
<p>LeBron James will have plenty of options if he chooses to become an unrestricted free agent for the third time in his career this summer. One of those destinations could be the Golden State Warriors. (Photo by Gregory Shamus/Getty Images)</p>

CLEVELAND – LeBron James is set to embark upon his third unrestricted free agency adventure this summer.

Billboards have reached out to him since last winter. Social media is hungry for any morsels of information. Las Vegas has already placed odds on where he will land.

NBA fans just can’t get enough of the media speculation, which certainly fuels more conjecture from all those unnamed "sources."

It has already begun
The unofficial speculation machine kicked off when the Cavaliers lost Game 3 of the NBA Finals to the Golden State Warriors. The hype will only continue to ramp up in the coming weeks.

Would James seriously jump to the Warriors? How about a reunion with Kyrie Irving in Boston? Or is LeBron finally going to Hollywood full-time?

The list ranges from the far-fetched (Milwaukee and New York) to the serious contenders (Houston, Philadelphia and the Lakers). There is also the less-than-glamorous scenario for the national media of a return to the Cavaliers.

ESPN’s Stephen A. Smith says that Game 4 will be the last time James will wear a Cavaliers’ uniform when he walks off the Quicken Loans Arena floor.

“He has fulfilled his promise (to Cleveland),” Smith said. “He owes them nothing. They owe him everything. And one day a statue will be erected outside this arena because of what that man did for this franchise, this city and this area.”

But if 2014 taught us anything, it's that speculation about James is just that.

James consistently tells the media he lives in the moment, and he has maintained that focus throughout the season. No one truly knows where his mind is with free agency. Maybe not even James himself.

“You can say it’s a distraction — it’s not,” James said in February. “Not a distraction. It is actually very flattering that I’m sitting here at 33 and in my 15th year and teams or guys — I don’t want to say teams because that becomes tampering. But people in their respective city want me to play for them. That’s cool, I think. That’s dope.”

Let’s break down what James could decide in the next few weeks:

If he wants to finish his career here: Cavaliers
This is the scenario all Cavs fans obviously want this summer. James, who led the Cavs to four consecutive NBA Finals, may re-sign with Cleveland or simply allow the team to pick up his $35.6 million player option for the 2018-19 season – his 16th year in the NBA.

James told SI at the time he wouldn’t leave Miami for anywhere besides Cleveland. “This is what makes me happy,” James said.

Yes, these quotes are from four years ago. But, certainly, James has an affinity for Northeast Ohio.

When he left the Heat, he said his calling to the area went above basketball. He has an Akron-area home with his family and many philanthropic interests. He also embraces being a role-model.

“I want kids in Northeast Ohio, like the hundreds of Akron third-graders I sponsor through my foundation, to realize that there’s no better place to grow up,” James said in 2014.

James didn’t promise a championship when he returned to the Cavs, but his legacy is certainly ensconced in this area after the NBA title in 2016. He is adored here. What better option than staying home?

If he wants to beat the Warriors: Rockets
Former Miami teammate Chris Bosh told Colin Cowherd this week that he believes the Rockets are the frontrunner to land James.

James Harden, Chris Paul and James would certainly give new meaning to the “Big Three.”

It’s a well-known fact that James is friends with point guard Chris Paul, though ESPN’s Adrian Wojnarowski reported the Rockets may need to offer Paul a max contract to keep him, so it may take some creative maneuvering.

How would James fit in with the offensive juggernaut that was the Harden, the likely NBA MVP, and the Rockets this past season?

One thing is certain: Houston took the Warriors to the brink in the Western Conference finals. This could be James’ final chance for true redemption against Golden State.

If he wants to go mogul: Lakers
Move over Lonzo Ball. James would be The Man in the City of Angels.

James has a $23 million mansion in Brentwood, has had roles in movies and owns a production company, SpringHill Entertainment.

There was been speculation that James would connect with Oklahoma City Thunder forward Paul George in a free-agent blockbuster move by the Lakers.

“That’s gonna be a conversation or conversations they are gonna have once we get toward July," ESPN’s Wojnarowski said earlier this week.

Still, would James want to jump to a Western Conference team that is not a contender next season and play at the Staples Center made famous by Kobe and Shaq? Then again, James would join the other Lakers legends like Magic, Kareem and Jerry West, who are revered.

If he wants to stay in the East and win: 76ers
James was flattered with Sixers’ fans fawning over him this past winter when three billboards that urged him to sign with Philadelphia appeared outside Cleveland in February.

But the Sixers have experienced some turmoil recently after Bryan Colangelo resigned as president of basketball operations Thursday. Colangelo's wife admitted to operating Twitter accounts that criticized team members and propped up Colangelo.

Still, the prospect of James playing with an emerging power in the Eastern Conference that has Ben Simmons and Joel Embiid is intriguing.

If he wants to make the NBA a joke: Warriors
Talk about an all-time super team. Could the unthinkable happen? Ever since February when ESPN’s Chris Haynes published a story saying if the Warriors could create a max salary slot they could meet with James, there has been at least a possibility.

"I think if LeBron James went to the Golden State Warriors then there would be a high possibility I won't be here," Warriors forward Draymond Green said Thursday.

James and the Cavaliers have faced the Warriors four consecutive times in the NBA Finals. James understands Golden State has “championship DNA” with how they approach basketball. He likened it this week to playing the New England Patriots.

“Obviously, from a talent perspective, if you’re looking at Golden State from their top five best players to our top five players, you would say they’re stacked better than us,” James told reporters Thursday. “Let’s just speak truth. Kevin Durant. You’ve got two guys with MVPs on their team. And then you’ve got a guy in Klay (Thompson) who could easily be on a team and carry a team, score 40 in a quarter before.”

How would Cavs fans react if James went to the Bay Area just weeks after the Warriors’ sweep? It’s mind-boggling to think of such a scenario. And yet it's not out of the question.

Regardless of the outcome, a summer with James as a free agent is great fodder for the media. The NBA has a unique ability to grab headlines for weeks after its season. This summer will be no different.