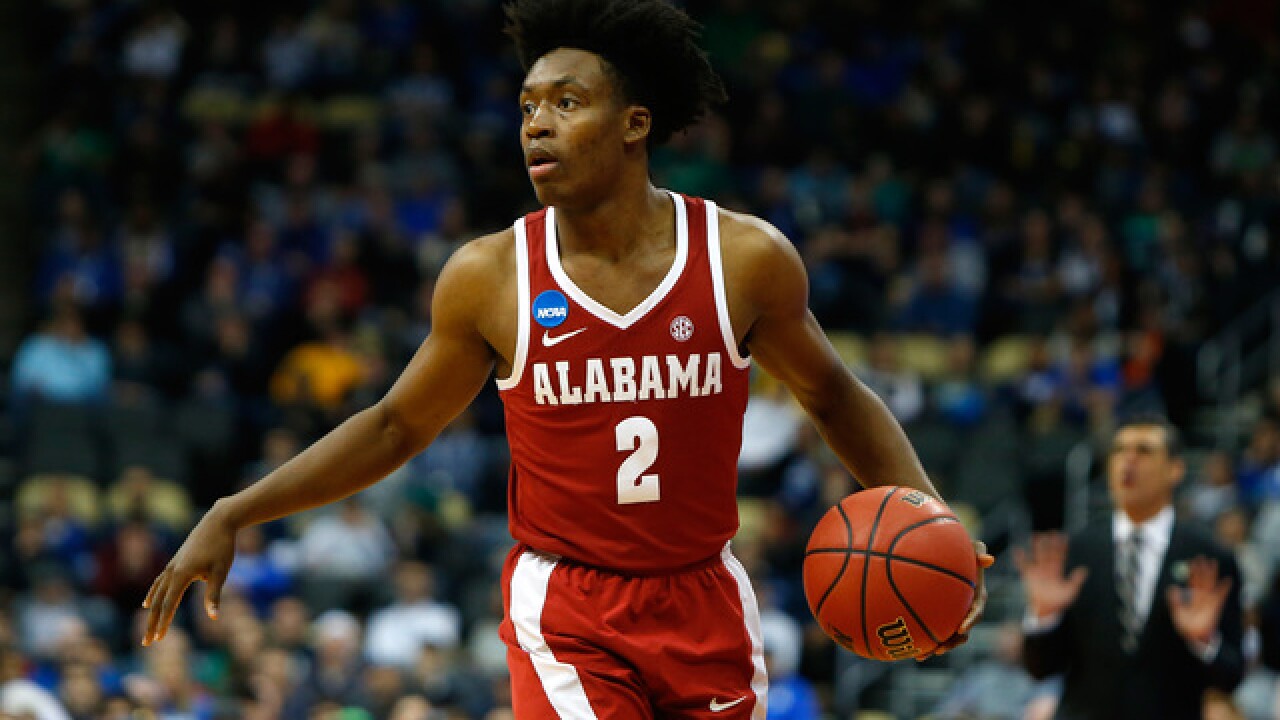 Copyright 2018 Scripps Media, Inc. All rights reserved. This material may not be published, broadcast, rewritten, or redistributed.
Justin K. Aller
<p>PITTSBURGH, PA - MARCH 17: Collin Sexton #2 of the Alabama Crimson Tide dribbles against the Villanova Wildcats in the second round of the 2018 NCAA Men's Basketball Tournament at PPG PAINTS Arena on March 17, 2018 in Pittsburgh, Pennsylvania. (Photo by Justin K. Aller/Getty Images)</p>

With the No. 8 pick in the 2018 NBA Draft, the Cavs have selected Alabama point guard Collin Sexton. With LeBron James's future hanging in the balance, it's a choice that will be massively scrutinized over the next few days.

Welcome to CLE and the @Cavs franchise, @CollinYoungBull. Everybody here in the draft room is more than excited you will be bringing your talents, skills, and most importantly your passion & work ethic to The Land. Let’s go #youngbull.

About LeBron...
With the trajectory of their franchise riding on where he decides to play next season and beyond, the Cleveland Cavaliers entered this year’s draft not knowing if they were choosing a player to help them — and James — contend for another championship, develop a prospect for the future or potentially take a player to trade.

James has until June 29 to exercise his $35.6 million contract option for next season or decline it and become an unrestricted free agent, officially making him the planet’s best and most coveted player.

The 33-year-old is not expected to reveal his intentions until after the draft.

Anything seems possible at this point. James and his representatives have kept an air-tight lid on their plans.

James has remained off social media since the playoffs began in April, and his self-imposed blackout has continued since the Finals ended.

He’s been quiet, but there’s no doubt he’s watching.

About the Cavs...
The Cavs, too, have been secretive while general manager Koby Altman prepared for his first draft by consulting with his staff on what to do with the No. 8 overall pick, the one they received last summer in the seismic trade that sent All-Star point guard Kyrie Irving to the Boston Celtics.

It’s proved to be quite a quandary for Cleveland, and James isn’t helping the Cavs by keeping them in suspense.

It’s also possible that James hasn’t made up his mind.

Following Game 4 in the Finals, James said he’ll factor in his family’s well-being along with his thirst to win more titles into a decision that once again has Cleveland edgy.

And while there are numerous unknowns, there is one indisputable fact: the Cavs must upgrade their roster to have any chance of keeping James and continuing a relationship that was resurrected in 2014.

After yielding to Irving’s request and trading him, the Cavs spent all last season trying to replace him. They never came close, and without a dependable second scoring option or a guard, James was forced to shoulder a heavier load than ever. He succeeded in getting to his eighth straight Finals, but was then overmatched by the deeper Warriors.