All eyes on OBJ as Beckham finally practices with Browns 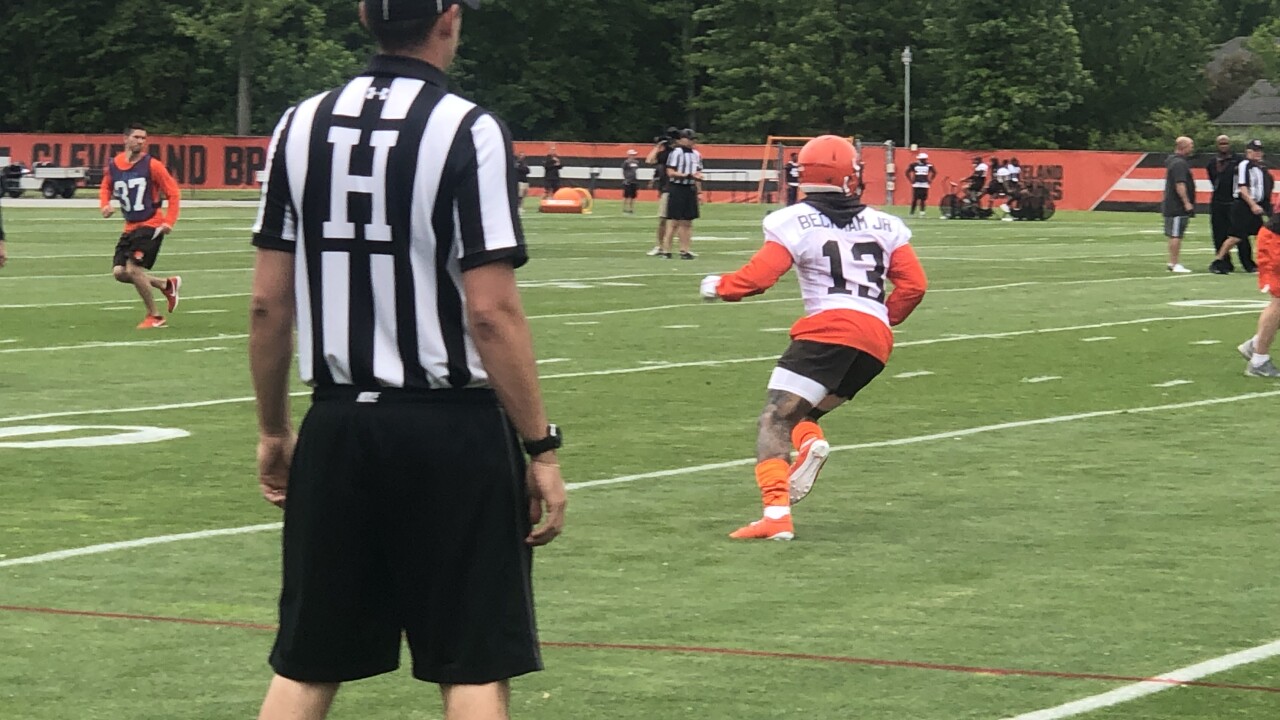 BEREA, Ohio — Wearing a tinted facemask visor, bright orange socks, white gloves and his familiar No. 13, Odell Beckham Jr. was easy to spot on the field.

At least he was out there.

The Browns finally got another look at what they traded for.

After skipping all but one of Cleveland’s voluntary offseason workouts to train on his own in California, Beckham joined his teammates Tuesday for the first practice of the team’s mandatory, three-day minicamp.

Beckham looked sharp while running routes and hauling in a touchdown pass from quarterback Baker Mayfield, who has been eager to get in more time with the three-time Pro Bowler acquired in a March trade.

Although he may have some catching up to do with the playbook, Beckham appeared up to speed.

Kitchens then paused before accusing media members of twisting his words last week when he said Beckham missed “a lot ... the offense” during his extended absence.

For weeks, Kitchens had loyally defended Beckham, saying he understood his reasons for training on his own and that he wasn’t worried about him studying.

But Kitchens, who chooses all his words carefully, seemed to be sending a message last week to Beckham by pointing out that he had missed out on the majority of Cleveland’s offensive installation.

Kitchens returned to Beckham’s side, walking back his previous comments.

“It was voluntary, guys,” he said to reporters. “You guys take comments that I make last week and turn it into something other than what the comment actually meant. I was looking forward to seeing Odell. I truly was. I’m not going to (lie to) you. I really was. He missed a lot. He understands that, but he didn’t really miss as much as you really think because he’s been studying every night just like these other guys, he just hasn’t been here.

“He felt it more compatible for his body to get in good shape and be at the best he could be when he got here. All right? Would I have liked him here? Yes. No doubt it. I want everybody here. But he didn’t have to be here, it’s voluntary. I don’t know what the definition of voluntary is if it’s not voluntary.”

Beckham is expected to meet with the media before Wednesday’s practice.

Mayfield said he didn’t have any problem with Beckham’s offseason agenda.

Kitchens got in one last shot when he was asked if Beckham looked mentally ready.

“I’ll let you judge that,” he said. “Maybe you guys spend a little time with getting to know him, all right? Because he’s a very bright guy and he picks up things very quickly — even over the phone.”