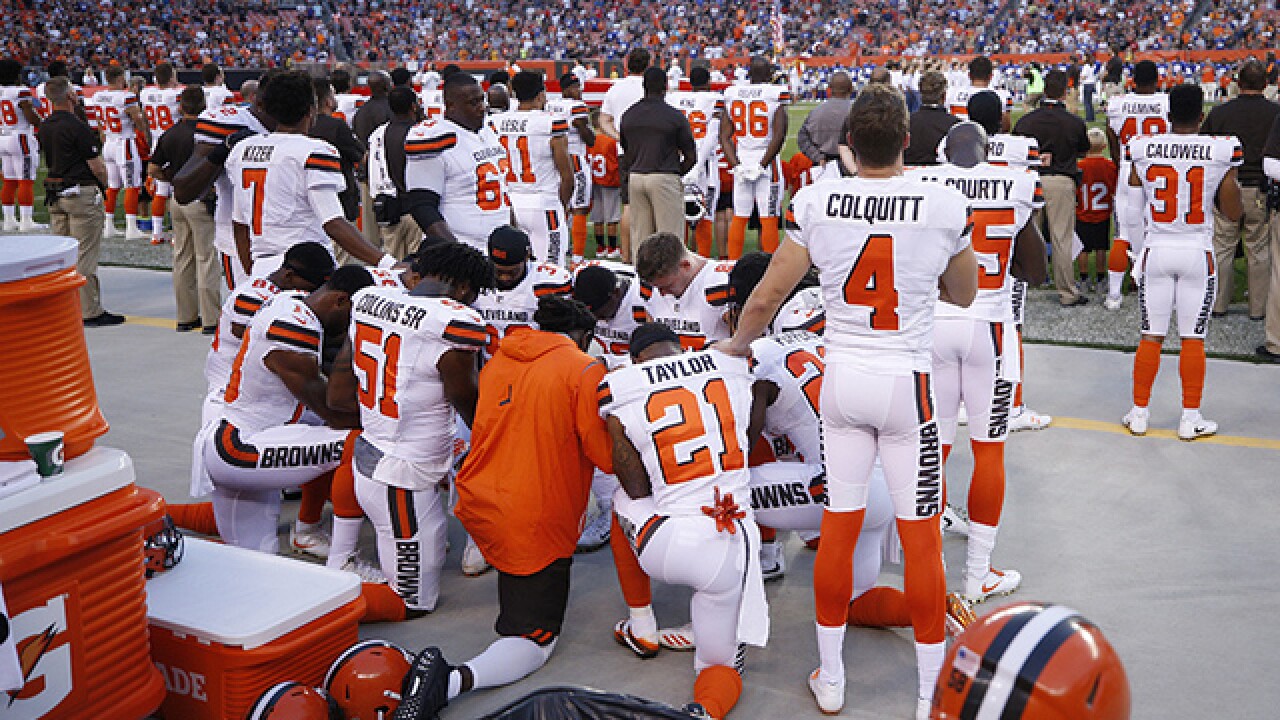 Copyright Getty Images
Joe Robbins
<p>CLEVELAND, OH - AUGUST 21: A group of Cleveland Browns players kneel in a circle in protest during the national anthem prior to a preseason game against the New York Giants at FirstEnergy Stadium on August 21, 2017 in Cleveland, Ohio. (Photo by Joe Robbins/Getty Images)</p>

Angry fans took to the Cleveland Browns Facebook page overnight and into Tuesday morning to voice their frustration with the players who kneeled during the national anthem Monday night.

"I wanted to take the opportunity with my teammates during the anthem to pray for our country," said DeValve, one of two white players to participate. "And also to draw attention to the fact that we have work to do. And that's why I did what I did."

But many fans weren't so supportive.

The Browns Facebook page lit up after the game, with people calling the team "disgraceful."

"Pray before or pray after. Taking a knee during the National Anthem these days screams disrespect for our Flag, Our Country and our troops. My son and the entire armed forces deserve better than that," wrote one person.

"Cleveland Browns needed all the fans they can get!" wrote another. "They have one less now! How pathetic! You are not paid to protest! I for one am done with any professional team that act’s this way! Lost any money from me for life! For years I have protested as to why you are so bad and never win any more, now I see it’s your Teams values! Good luck but you lost this fan for life and all my spending$$. This country needs heroes and patriots not millionaire crybaby’s who disrespect this country and our flag!"

"A whole season of this kneeling garbage? You're paid to play a game in order to entertain us and give us an escape from the daily grind. Do your protesting on your own time. Can you get paid the incredible $$ you get paid playing football,ANYWHERE else on this planet? Be grateful for the cool job you scored only because you live in America"

"Shame on you Browns players who took a knee during National Anthem. I won't support a team who condones this behavior. I support Black Lives Matter but to disrespect your country by taking a knee is childish and offensive. Think of better, more productive way to support Black Lives Matter like donating your time and money to youth groups. To take a knee just makes you look foolish"

A few of the comments were supportive.

"Ya'll need to chill," said one person. "Patriotism is not blindly supporting your country. That is called Nationalism, like Nazi germany and Communist Russia. Patriotism is being able to look your country in the face and say "You can do better".

"Anyone willing to sell tickets because of protests for men, women and children who can't and don't have the spotlight like these men do can sell me their tickets.... I am willing to buy them since you're so disgusted at these men fighting for equality for those who can't...." said another.

Browns coach Hue Jackson, who last week clarified previous remarks that seemed to indicate he was opposed to any demonstrations, stood behind his players.

"We respect our players; we respect the flag," Jackson said following Cleveland's 10-6 win. "Those guys came to me and talked to me about it before they ever made a decision to do it. That is the way we feel about it, and we have talked about this. I said at some point in time, they may, and they have. I won't know about the next game until it happens, but again, this was tonight and we will move on from there."