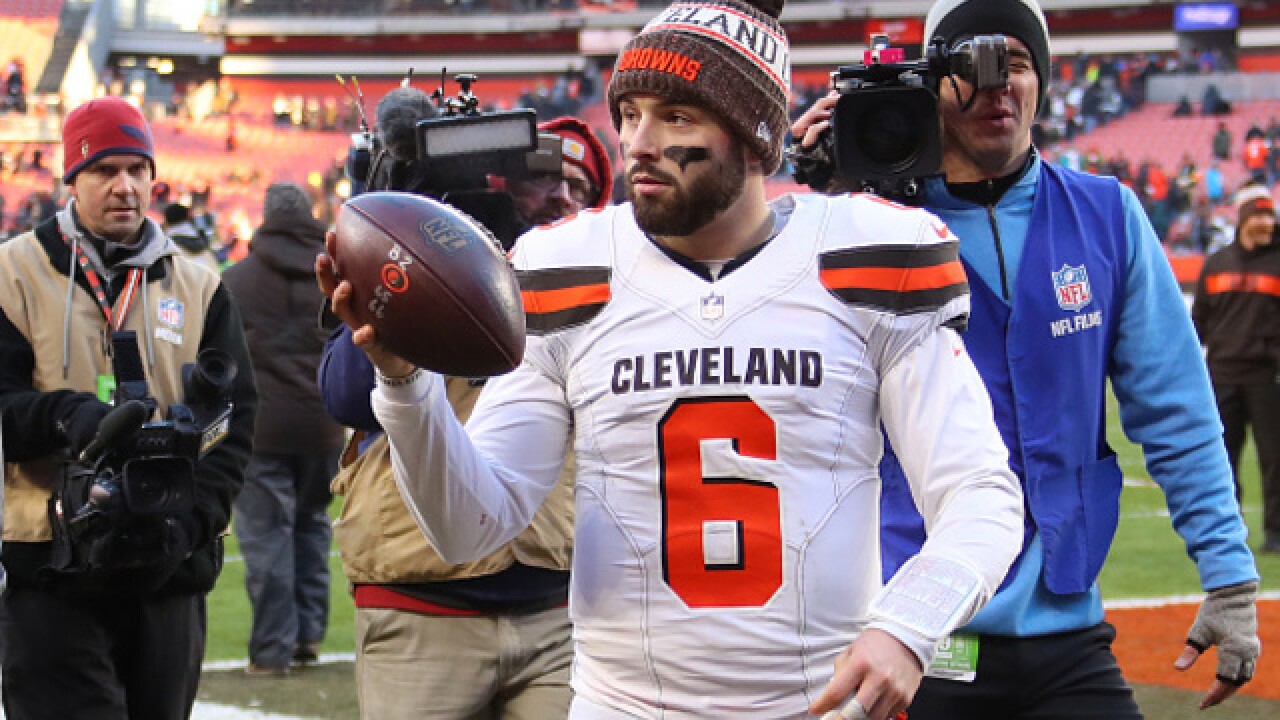 Image copyright 2018 Getty Images. All rights reserved. This material may not be published, broadcast, rewritten, or redistributed.
Gregory Shamus
<p>CLEVELAND, OH - DECEMBER 09: Baker Mayfield #6 of the Cleveland Browns walks off the field after a 26-20 win over the Carolina Panthers at FirstEnergy Stadium on December 9, 2018 in Cleveland, Ohio. (Photo by Gregory Shamus/Getty Images)</p>

As Baker Mayfield threw long passes to his wide receivers and short ones to backs before Sunday’s game against Carolina, Browns interim coach Gregg Williams knew his rookie quarterback was going to have a good game.

It wasn’t any sight.

It was a sound.

“You can hear the ball come out of the quarterback’s hand with a ‘ssssssst’ and you can hear how tight the ball was coming out of his hand,” Williams said. “It was bringing a smile to my face when I saw him warm up and really the entire game he was zipping it.”

Mayfield zipped it all day long, completing a 66-yard pass on Cleveland’s first play and whipping several passes into tight coverage during a 26-20 win that gave the Browns their fifth win and kept their faint playoff hopes flickering.

Mayfield’s arm strength isn’t usually the first thing mentioned when discussing the No. 1 overall pick’s top attributes. More often his accuracy, leadership and, of course, abundant confidence are brought up first. But Mayfield, whose “I woke up feeling dangerous” has become a catch phrase around Cleveland, has shown he can rear back and fire the ball with any quarterback.

After the Browns fell behind the Panthers 7-0, Mayfield quickly stripped Carolina of momentum by stepping up and throwing a laser down the field — the ball traveled more than 60 yards — to receiver Breshad Perriman, who hauled in the deep pass to set up Cleveland’s first TD.

The play exemplified Mayfield’s confidence, and the trust he has built with Cleveland’s coaching staff.

Mayfield showed off his arm — and accuracy — a little later with a 51-yard TD toss to receiver Jarvis Landry, who appeared to be well-covered on the play. Mayfield, though, squeezed his throw between two defenders, showing both fearlessness and faith.

“It was where it needed to be,” Landry said. “The guy’s back was turned. The corner that was coming from the outside was trying to squeeze it, and the ball literally went between both of them. It was a hell of a throw.”

Mayfield is bringing the heat.

The Browns (5-7-1) have won three of four going into this week’s game in Denver, and in those victories, he has completed 79 percent of his passes (54 of 68) for 712 yards with eight TDs and no interceptions. Mayfield has also shown remarkable resiliency by shaking off a three-pick performance in the first half at Houston to pass for 351 yards in the second half while standing in the face of the Texans’ tenacious pass rush led by J.J. Watt.

Williams has been cautious to heap too much praise on the 23-year-old, but lately he has gone out of his way to compliment his young QB.

Following Wednesday’s practice, Williams said Mayfield’s arm was “off the charts” in terms of its liveliness.

“He had a live day on Sunday, but (snaps fingers) came back today and it looked like it was even more live today,” Williams said. “The first thing I thought was ‘young’.”

But beyond Mayfield’s youth and the life in his high-velocity arm, Williams sees something special.

“The good quarterbacks, some of the times when some of us may judge a throw that, ‘Wow, that was not a very good throw.’ Why? Because it was on his back shoulder?” Williams said.

“It was on his back shoulder because that is the way that the guy throws the player open. Drew Brees and some of those guys — Joe Montana, Warren Moon, Peyton Manning — and all of the guys that I have been with or gone against — will throw the guy open.

“He is doing that. That is a natural thing. That is not something that can be overly taught at this level. If we have to spend a lot of time trying to teach that at this level, he probably will never ever get it.”

NOTES: While the Browns remain a long shot to make the playoffs, S Damarious Randall believes they belong in the postseason. “We feel like we’re a playoff team,” Randall said. “We feel like we deserve one of them six spots. We know we dug ourselves in a hole, and we know that we need some help. It starts with us winning out. If we win out, they just better not let us in the playoffs.” ... Rookie S Denzel Ward remains in concussion protocol. He missed Sunday’s game.