Back on track: RB Duke Johnson re-emerges for Browns in loss 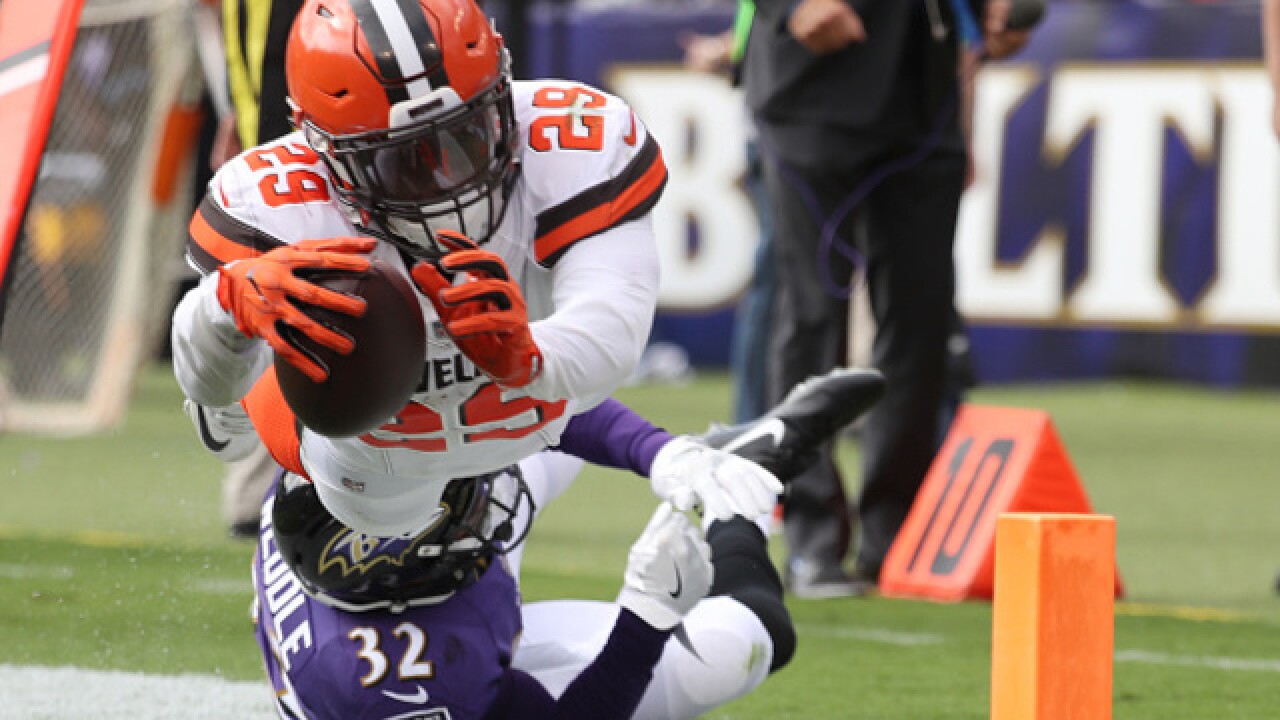 Copyright 2018 Scripps Media, Inc. All rights reserved. This material may not be published, broadcast, rewritten, or redistributed.
Rob Carr
<p>BALTIMORE, MD - SEPTEMBER 17: Running back Duke Johnson #29 of the Cleveland Browns runs towards the end zone as free safety Eric Weddle #32 of the Baltimore Ravens tackles him in the four quarter at M&T Bank Stadium on September 17, 2017 in Baltimore, Maryland. (Photo by Rob Carr /Getty Images)</p>

Duke Johnson wore a backpack on Monday that seemed symbolic.

The Browns finally asked him to carry a larger load.

Of the handful of positives to emerge from Sunday’s 37-21 loss to the Kansas City Chiefs, capping another stormy week of change and uncertainty in Cleveland,  Johnson’s two-touchdown  performance was at the top of the list.

After being overlooked — some would argue misused — for much of the season, Johnson was the primary focus of the Browns’ offensive game plan. He finished with nine catches for 78 yards, added one rush for eight and drew extra attention from Kansas City’s defense, which allowed his teammates to make plays.

Johnson was hesitant to say it, but Cleveland’s change at offensive coordinator, with running backs coach Freddie Kitchens replacing the fired Todd Haley, made a difference.

“Um,” Johnson said sheepishly when asked if the Kitchens-for-Haley swap was the reason for his rise in production. “I guess you could look at it that way. Again, it’s the same plays we’ve been calling, the same offense. There’s just certain things that coach Kitchens likes better than coach Haley did.”

Before Sunday, Johnson’s season-high was four catches and there were times when he wasn’t on the field at all. What made that even more perplexing was that Johnson led the Browns (2-6-1) with 74 catches for 693 yards last season and developed into one of the NFL’s best dual-threat backs.

But with Haley concerned about getting touches for running backs Nick Chubb and Carlos Hyde, who was recently traded to Jacksonville, Johnson became the odd-man out.

A proven playmaker not getting a chance to make plays.

Johnson was targeted by rookie quarterback Baker Mayfield against the Chiefs, and he hopes to get even more opportunities as the season progresses.

“I think it is possible,” Johnson said. “Just going out there and showing what I’m capable of doing, especially showing the reason why I’m here. It was a great showing for myself, but not so much for the team and we’re about team here. We should have gotten the win, that’s most important.”

Following his first game since being chosen Hue Jackson’s interim replacement, defensive coordinator/head coach Gregg Williams said Johnson’s breakout was caused by a combination of things, including Kitchens and Mayfield working together for the first time.

“Freddie did a good job and Baker, too,” Williams said. “Baker’s understanding of that from the read process — when a play is called as a quarterback, you don’t automatically know it is going to go to that person. There is a read definition that takes you to that person, but from Baker and Freddie, they did a good job with that.

“It was good to see that with Duke. Just like what we have talked about with other people, I think he can do more and he will. He had a good fire about him, and he will continue to improve too. We need him to improve.”

Getting Johnson more involved didn’t result in a win for the Browns, but it was a small step toward improvement.

Cleveland matched a season-low with only four penalties, and Williams, who decided early on he was going to be aggressive, liked that his offense converted three times on fourth down.

The Browns couldn’t keep up with Kansas City’s high-speed, high-scoring offense, but Johnson was impressed with the team’s character in the aftermath of Jackson and Haley’s firings.

“I never saw them blink,” he said. “One, two, scores down or whatever, we were always in a position to continue to fight. I never saw them blink. That is good. That is what we are supposed to do as professionals. Young team, old team, I do not care — that was good. There was a lot of positive that way. Defensively, we have to play better.”

Another bright spot was left tackle Greg Robinson. The 2014 No. 2 overall pick made his first start for Cleveland filling in for Desmond Harrison, who was out with an unspecified illness. Robinson not only protected Mayfield’s blind side, but handled all his other duties.

“He played well, didn’t he?” said Williams, who was on the Rams’ staff when they selected Williams. “I’ve seen him develop as a young guy. I’ve seen him have his battles, ups and downs, and it’s been good.”

Following the game, Mayfield singled out Robinson, who was grateful for the QB’s praise.

“It felt good to just get out there with the boys, taking it to the game field rather than just practicing,” said Robinson, signed by the Browns in June. “It was encouraging and I’m really happy that he spoke well about me.”

NOTES: Williams did not have updates on rookie CB Denzel Ward (hip), CB E.J. Gaines (concussion) or LB Christian Kirksey (hamstring), all injured Sunday. Williams reiterated his decision to sit DB Damarious Randall (groin) was so he can be healthy for multiple games and not just one.