Baker's got no love for Hue; Browns matter now

Copyright 2018 Scripps Media, Inc. All rights reserved. This material may not be published, broadcast, rewritten, or redistributed.
John Grieshop
<p>CINCINNATI, OH - NOVEMBER 25: Baker Mayfield #6 of the Cleveland Browns throws a pass during the second quarter of the game against the Cincinnati Bengals at Paul Brown Stadium on November 25, 2018 in Cincinnati, Ohio. (Photo by John Grieshop/Getty Images)</p>

Are they legitimate playoff contenders yet? Of course not; only their most ardent fans would say so.

Still, the Browns — owners of just one victory over the previous two entire seasons combined — are a club that now matters, not just because they’re capable of winning, as they did 35-20 against the falling-apart Cincinnati Bengals on Sunday, but also because they have some real characters.

First and foremost, of course, both on and off the field, is Mayfield, the Heisman Trophy winner and No. 1 overall draft pick who helped the Browns (4-6-1) end a 25-game road losing skid that was one shy of the NFL record. After tossing four TD passes and zero interceptions, he made sure to get in his shots against his former head coach, Hue Jackson, who was fired by Cleveland less than a month ago and quickly took a job with the Bengals as a defensive assistant. 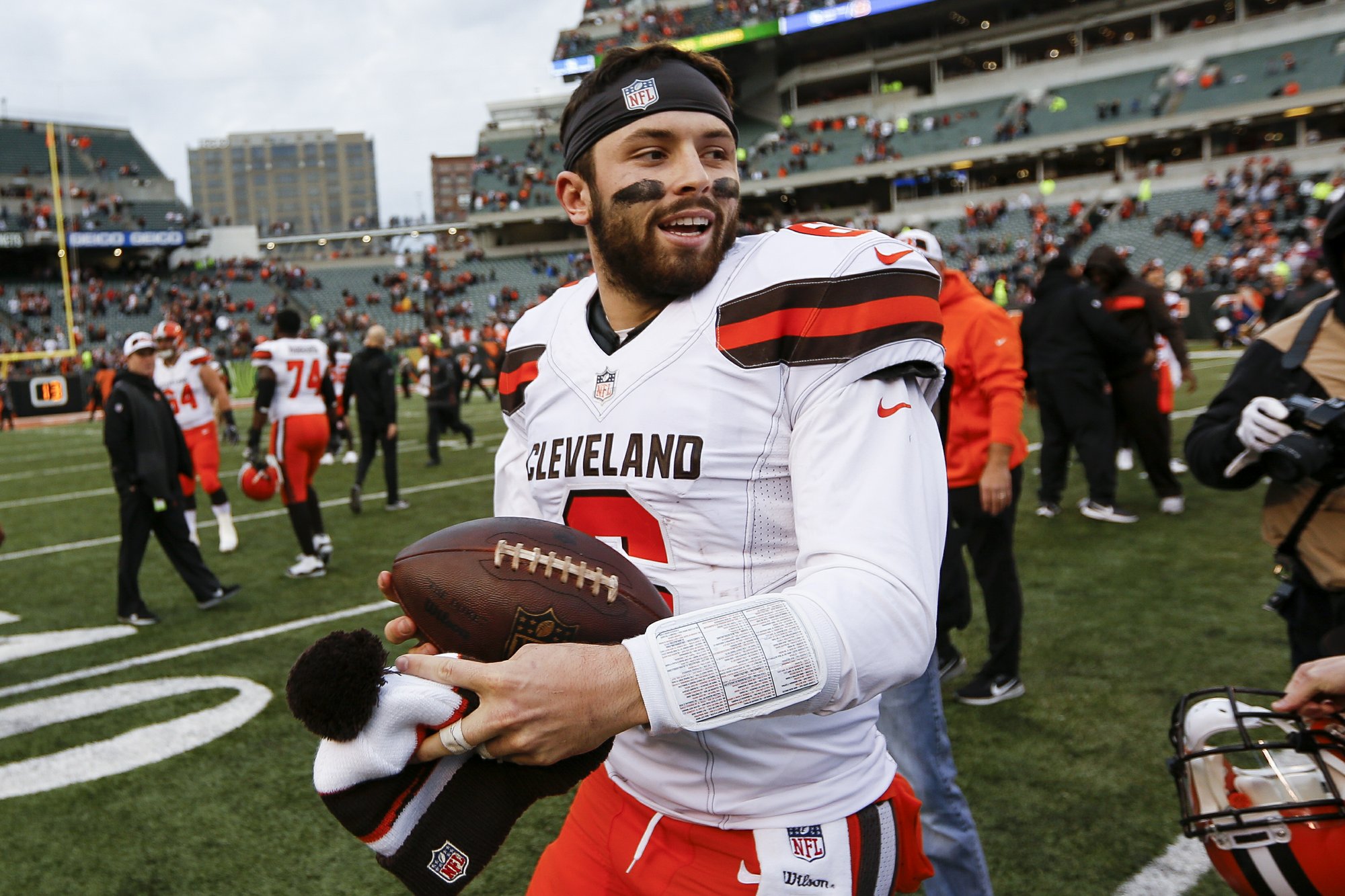 Browns QB Baker Mayfield is brash, on the field and off.

Afterward, when they met on the field for a handshake, Mayfield resisted what appeared to be Jackson’s attempt to bring him in for a hug. Then, speaking to reporters, Mayfield took what could only be construed as a jab at Jackson and the also-fired Todd Haley, the Browns’ former offensive coordinator, saying: “We have people that we believe in calling the plays now.”

“Didn’t feel like talking,” Mayfield said of his brief postgame interaction with Jackson. “Left Cleveland, goes down to Cincinnati. ... It’s just somebody that was in our locker room asking us to play for him and then goes to a different team we play twice a year. Everybody can have their spin on it. But that’s how I feel.”

DAMARIOUS RANDALL WITH THE TAKEAWAY

There was more, too. When Browns safety Damarious Randall grabbed a pick in the first half, he ended up out of bounds on the Bengals’ sideline and handed the ball right to Jackson. Hmmmm.

With Mayfield joined on offense by dynamic running back Nick Chubb — the fourth rookie in league history with rushing and receiving touchdowns in consecutive games — and young talent such as Myles Garrett and Denzel Ward on defense, plus the sort of swagger Randall showed, it looks as if the Browns might no longer provide the must-not-see-TV they’ve offered for quite some time.