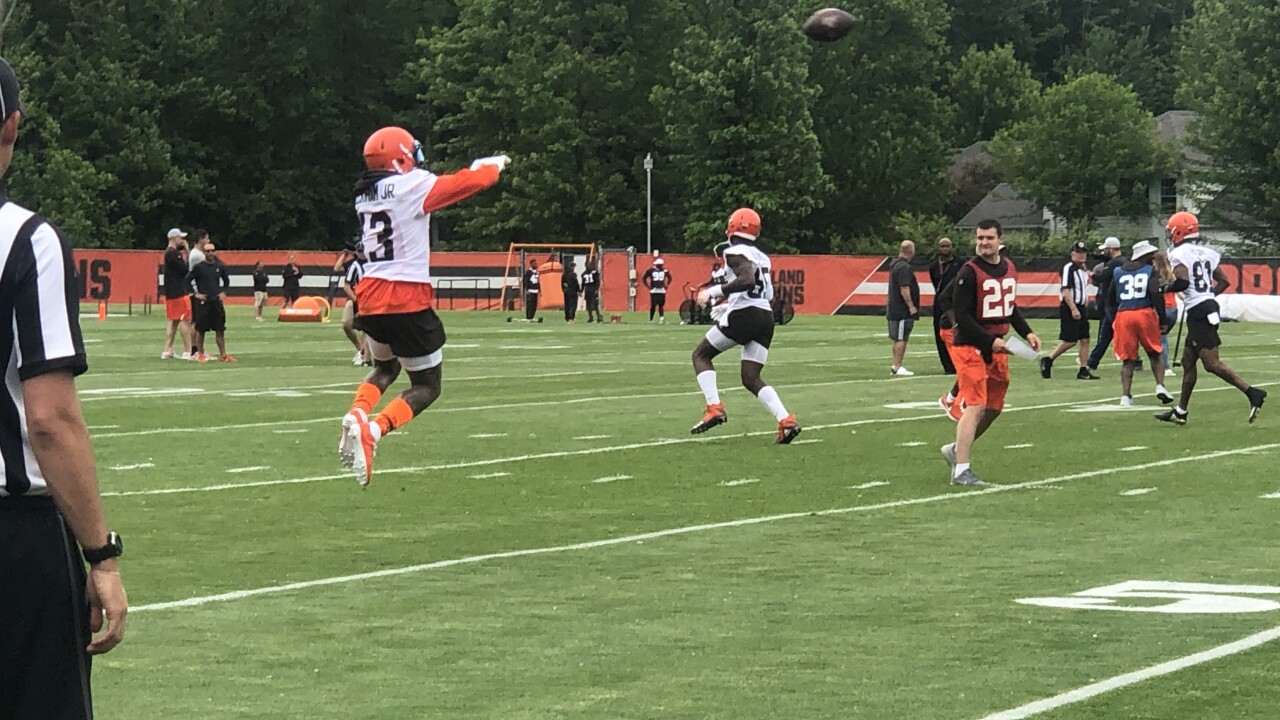 BEREA, Ohio — Once Odell Beckham Jr. found his way back to Ohio, it didn’t take him long to notice a change.

“I feel something in the air,” he said. “Something special that Cleveland hasn’t had for a while.”

Beckham has breathed new life into the Browns.

The superstar wide receiver held court for nearly 20 minutes Wednesday in his first media availability since Cleveland introduced him to its ravenous fan base in a news conference on April 1. Beckham, whose antics in New York became tabloid fodder for five seasons, spent most of the past eight weeks away from the team getting his body into peak condition and his mind right.

“Mentally, physically, spiritually, I’ve gone to a different place,” he said. “For the people that know me, they know I’m in a place I’ve never been in in my entire life and I’m just happy with where I am at and I’m always going to keep it pushing.”

Wearing an orange zip-up jacket with a pulled-up brown hoodie framing his face, Beckham smiled easily and often during his interview session while fenced in by one dozen TV cameras.

He feels refreshed and can hardly contain his excitement to be joining an offense that includes quarterback Baker Mayfield and close friend Jarvis Landry.

“I’m almost giddy,” he said. “I feel like a little kid with the excitement that I have, seeing Baker, seeing these guys. We talk a lot about this offense, but this defense is something special and this team is really coming together. But the good part about it is that it’s the beginning of June and we still got a lot of time, we still got a training camp to go through and I feel like this team is going to come together.

“But I’m beyond excited about the opportunity I have here to start over, a new team. Obviously, the goal is always going to be the same — to hang banners, that’s what you play this game. We know we got a lot of expectations. We got a lot of work to do and I think we’ll get there.”

The Browns are just happy he’s around.

They haven’t seen much of the three-time Pro Bowler, who skipped the majority of the team’s voluntary offseason workout program, showing up for just one practice while opting to train on his own in California.

Beckham, of course, stayed in the spotlight during his extended absence by chronicling his trips to Coachella, the Met Gala, and Monaco’s Grand Prix with a steady stream of postings on Instagram.

It’s how Beckham rolls, and the Browns are quickly learning that his off-field moves will be as scrutinized as any pass patterns.

But they were OK with his solo mission, and believe going forward he’ll put the team first. Beckham stayed in touch over the past two months with coach Freddie Kitchens, who isn’t worried about the playmaker being behind.

“Odell is a bright guy,” Kitchens said following a workout forced indoors by thunderstorms. “He is smart. It is not like this is the first time he has opened up our (play) book. He has been studying and all that kind of stuff. Odell is making progress just like everybody else. Odell had some bad plays, and he had some good plays. He is going to continue to grow and learn, and that is what everybody else is going to do. Odell doesn’t have a magic wand.

Beckham learned during his time in New York that everything he says will be dissected, analyzed, and even twisted. In a recent GQ interview, Beckham said he wanted to bring championships to Cleveland and hoped to turn the Browns “into the new Patriots.”

He was criticized for the remark, but it’s not as if he didn’t expect backlash.

“I’m not surprised with anything,” he said. “I feel like I could sit in a corner in a room full of people and not try and bother anybody and it would be like, ’You too good to be out here with the rest of us? It’s just a tough situation for me to be in. Anything that I say I know is going to take off. I’ve gotten used to it.”

But Beckham didn’t come to Cleveland to be second-best to anyone.