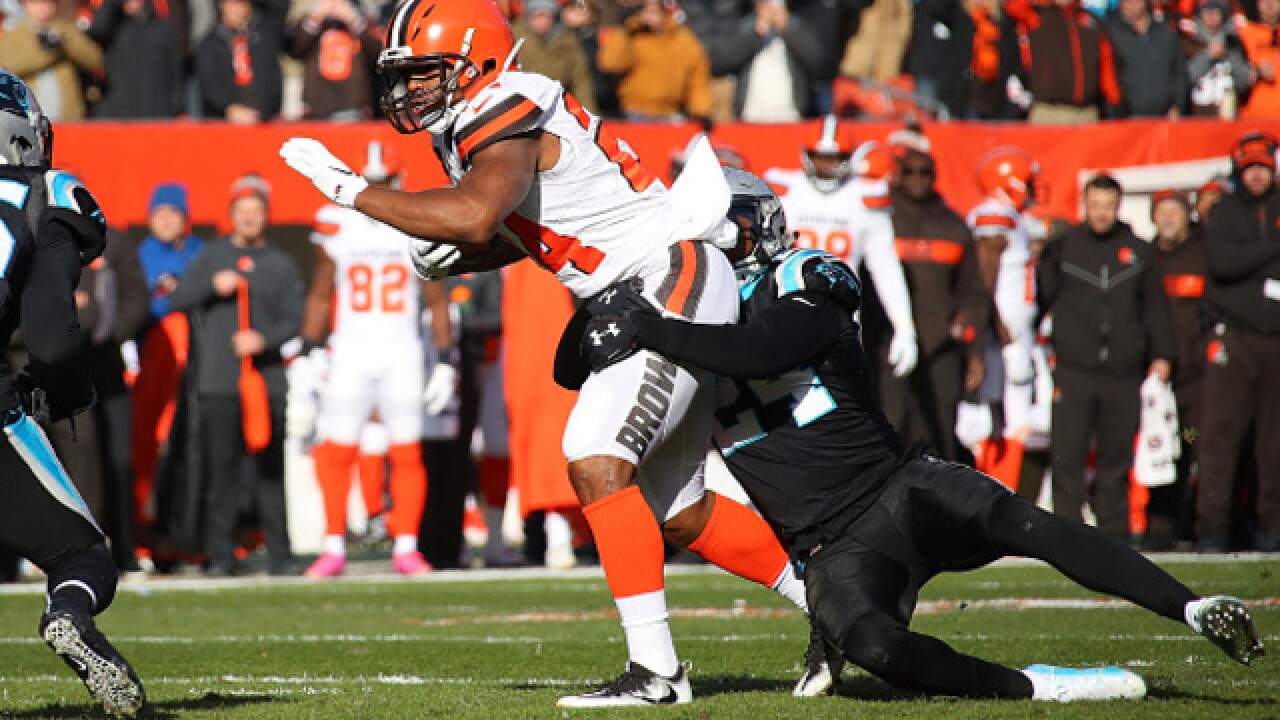 Copyright 2018 Scripps Media, Inc. All rights reserved. This material may not be published, broadcast, rewritten, or redistributed.
Gregory Shamus
CLEVELAND, OH - DECEMBER 09: Nick Chubb #24 of the Cleveland Browns is tackled by James Bradberry #24 of the Carolina Panthers during the first quarter at FirstEnergy Stadium on December 9, 2018 in Cleveland, Ohio. (Photo by Gregory Shamus/Getty Images)

The Browns are young, confident bordering on cocky, and maybe a little naive.

Following the lead of their brash, rocket-armed rookie quarterback Baker Mayfield, who is getting better by the week, the Browns believe in more than themselves and each other. With three games left in a season they’ve turned from being another Cleveland calamity into a stunning success, they haven’t given up on making the playoffs.

Although they’re facing nearly impossible odds — several websites give them a 1 percent chance — of winning out and reaching the postseason for the first time since 2002, the Browns (5-71) haven’t lost faith. Not an ounce.

This team appears unmoved by challenges considering where it was in October amid another coaching change and following some tough, close losses Cleveland would love to have back.

The Browns have won three of their past four games under interim coach Gregg Williams, whose one-meeting-at-a-time, one-practice-at-a-time, one-game-at-a-time mantra has convinced his players they can beat anyone.

Williams has instilled an attitude and edge into all his players, who are feeding off the energy and giving the demanding, ultra-competitive defensive coordinator reason to smile.

“It’s fun for me to be involved with these young guys here getting a chance to believe in themselves,” Williams said Monday on a teleconference. “And it really kind of sparks me to see the flash in their eyes, the strut in their step and the confidence in their body language when they get a chance to put everything together.”

They did on Sunday, starting with Mayfield’s 66-yard completion to Breshad Perriman on Cleveland’s first snap to safety Damarious Randall intercepting Cam Newton in the final minute.

Williams deserves credit for pushing the Browns forward because it would be so easy for them to look back at what might have been and consider where they could be in the playoff hunt.

They could bemoan the Week 1 tie to Pittsburgh or the gut-wrenching loss in New Orleans when Cleveland’s Zane Gonzalez missed four kicks. They could regret the overtime loss in Oakland that swung on a reversed call or losing at Tampa Bay on a 59-yard field goal in OT.

However, Williams won’t let the Browns, who play at Denver (6-7) on Saturday, reflect on anything other than their near future.

“You can’t waste your time thinking about those things,” he said. “You can’t change that. The only thing that you do have an impact on is what is up next.”

And while Williams’ leadership has been invaluable and polished his resume for any future job, Mayfield’s the one leading Cleveland’s charge.

The No. 1 overall draft pick had another strong game, completing 18 of 22 passes — three were dropped — for 238 yards and a touchdown against the Panthers. In Cleveland’s past three wins, Mayfield has completed 54 of 68 passes for 712 yards with eight TDs and no interceptions.

Even after throwing three picks in the first half a week ago at Houston, Mayfield passed for 351 yards after halftime.

But beyond his stats, Mayfield has won over teammates, who love his fire and toughness. They want to follow him.

Mayfield has filled the Browns with confidence.

“And that would not happen if it was phony,” Williams said. “It would only happen, it only happens when everybody sees it be sincere.”

Before Sunday’s game, Mayfield told Randall the Browns might score on the game’s first play and Perriman nearly did.

“I didn’t pay attention to what he said until after I saw the first play and I saw 19 (Perriman) running free,” Randall said. “And I’m like, ‘Baker’s funny.’ We’re just having a lot of fun.”

Whether it’s fun or foolish, the Browns honestly feel they can beat the Broncos, Bengals and Ravens and finish 8-7-1, which would be their best record since 2007. If that happens, and they get some major help from others, Cleveland could be back in the playoffs for the first time since Butch Davis was coach.

“If it takes care of itself and we end up the sixth seed,” Randall said, “somebody’s going to be in trouble.”