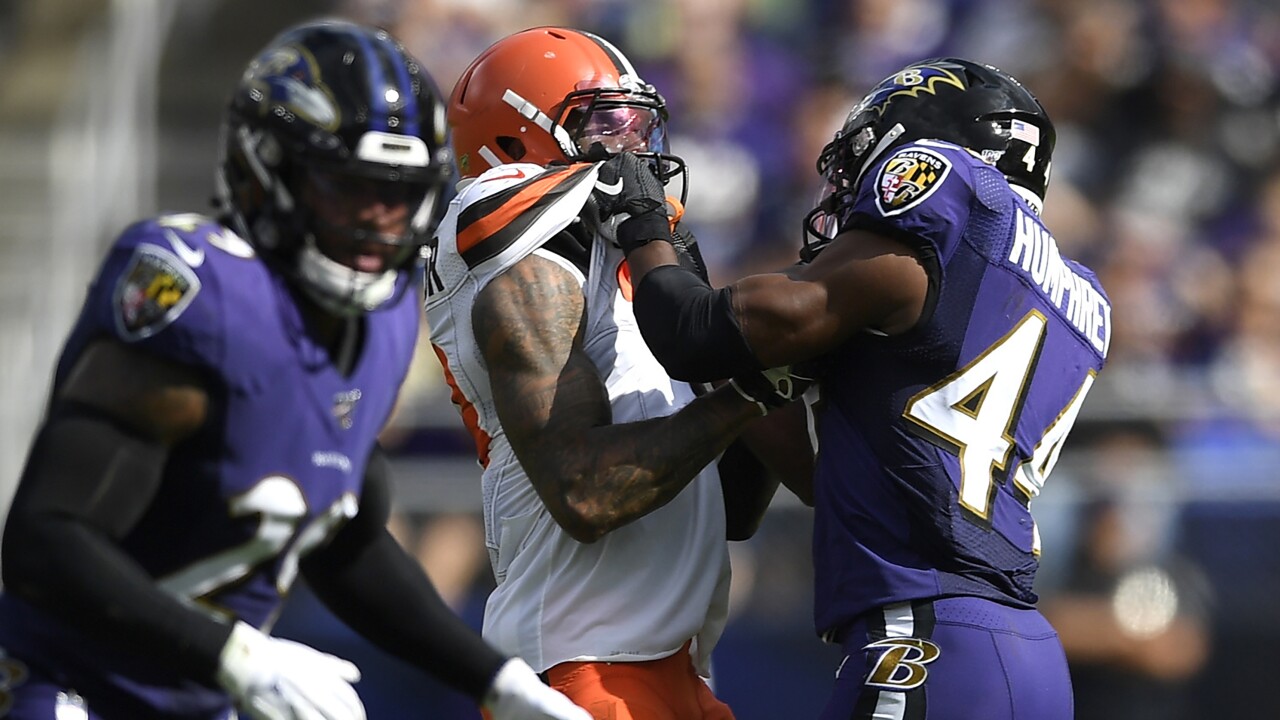 BEREA, Ohio — Odell Beckham Jr. would rather not fight. That doesn’t mean he won’t.

Cleveland’s star receiver was fined an undisclosed amount by the NFL for his heated skirmish last week with Baltimore cornerback Marlon Humphrey, who appeared to choke Beckham after throwing him to the ground.

Beckham and Humphrey tangled throughout the Browns’ 40-25 win on Sunday. The most violent exchange came in the third quarter when the pair squared off at the end of a running play and were flagged for personal fouls.

In the heat of the moment, Beckham said he didn’t know if Humphrey choked him, but said he resisted other chances to retaliate.

“He was on the ground, I was standing up still and I kind of just let the moment pass and I sort of regret letting the moment pass, but I’ve come a long way,” he I said. “I probably would have been suspended for the next game if I had done what I wanted to do, knowing how I’ve been treated. It was just something where I had to look out for my teammates and not hurt them even more than the 15-yard penalty and be sitting out a whole other game.

Beckham, though, has a history of violations for aggressiveness. He was suspended one game for a helmet-to-helmet hit on Carolina’s Josh Norman in 2015, and had been fined over $220,000 before his altercation with Humphrey.

Beckham initially joked that his latest punishment was for $250,000, but he wouldn’t reveal the actual charge. Because of his previous offenses, this one will cost him at least $70,000 (the league’s standard for a second fight). He plans to appeal.

He also offered to pay the $14,029 fine assessed Browns center JC Tretter, who came rushing to Beckham’s defense during the scuffle.

Tretter said he would react the same way.

“I wouldn’t have changed anything I did,” he said. “I understand the intent of the rule. ... But when you have a guy mounted on top of another choking him, if the answer is ‘We want you to just stand there,’ I’ll take the fine for that. I didn’t throw a punch. I didn’t think I escalated the situation. I was there to de-escalate the situation.

“We’ll appeal it and see what they say, but I think common sense should hopefully rule.”

Earlier this week, the Ravens posted a slow-motion video on their website claiming it showed proof that Humphrey didn’t choke Beckham and that he was only trying to protect himself.

Beckham was aware of the video, but refused to prolong the dispute with one of Cleveland’s AFC North rivals.

Beckham said the video doesn’t provide an accurate account of everything that transpired. His experience is that he’s often made to look like the villain when he may be a victim.

“That’s the funny thing about TV, is you can see what you want to be seen,” he said. “You can show what you want to be shown. That’s what game clips are for, the game film is for. It’s a completely different angle. It’s like what I said a long time ago when it came down to the other altercation (with Norman) I had. Only clips that were being shown are exactly what they want to be shown. That’s how this world works. I’m not naive. I’ve grown up a lot.”

None of this is new to Beckham, who feels targeted by opposing teams as well as the league.

Beckham was recently reprimanded for wearing a nearly $200,000 watch during the Browns’ opener, and the 26-year-old said it was only an issue because he was the one with it on. The following week, he was sent off the field by officials during a game in New York because they said his helmet visor was too dark.

He feels the league’s policy on fines is far too arbitrary.

“It’s crazy,” he said. “The NFL finds ways to just take it (money). They’re going to take it from you. I understand a penalty, getting fined for that. But pants above the knees, a shirt hanging out, and you’re getting $5,000 taken from you? Pads above your knees? You really think that this little knee pad covering my kneecap is going to affect, if somebody hits me, weighs 250 pounds, running 18 mph.

“I don’t do physics, but if I get hit, this is not going to protect me. It’s just stuff like that. I feel like we can come to a better agreement and simplifying things and not taking the money out of the pockets of the players who are putting money into this entire game.”