Browns better under bright lights, but many problems remain 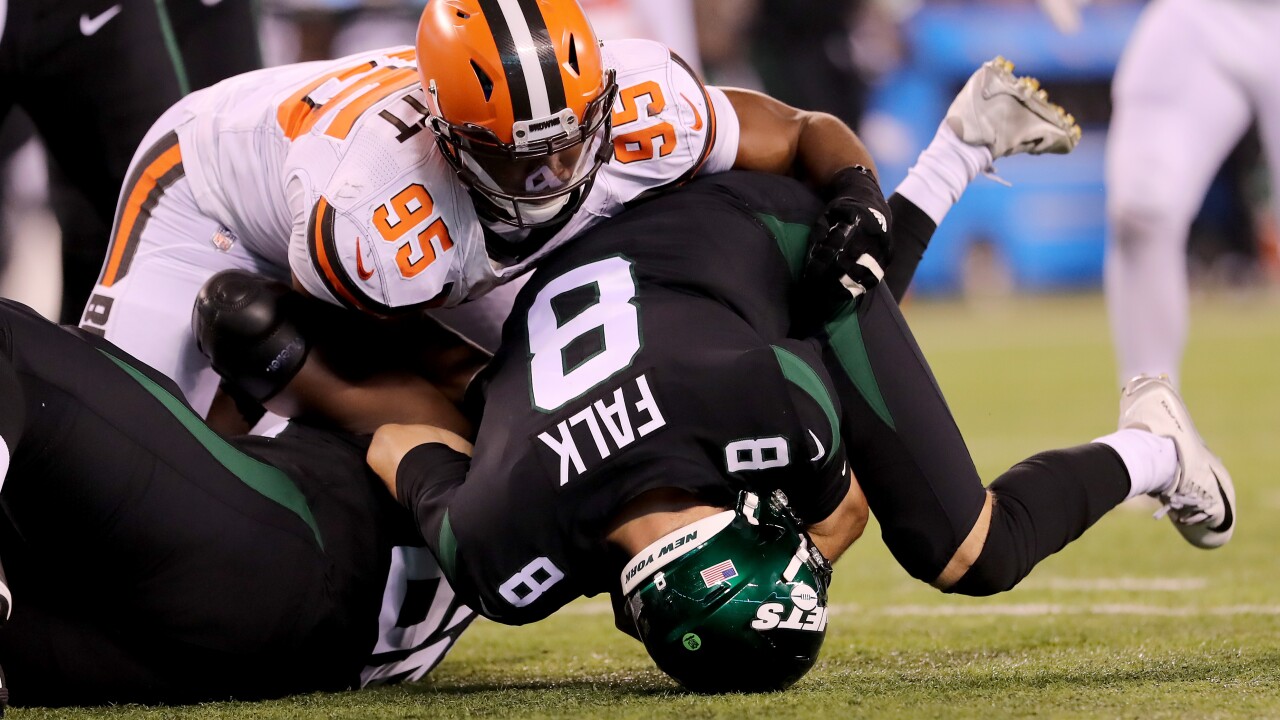 CLEVELAND — Once Odell Beckham switched on the afterburners and jetted away from the Jets for the longest touchdown of his career, the Browns put a disappointing loss and an emotional week behind them.

They can breathe again. For a second.

Under the bright lights and back where he spent his first five NFL seasons, Beckham scored on an electrifying 89-yard play and made another one of those famous one-handed catches as the Browns eased some of the pressure on them with a 23-3 win Monday night over the New York Jets, who were missing their two best players and down to their third-string quarterback.

New York’s misfortune was perfectly timed for the Browns (1-1), who had performed so poorly in their Week 1 loss to Tennessee.

This was better, but still not where the Browns want to be.

“We didn’t play our best football,” said Beckham, who had 161 yards receiving but couldn’t escape more drama, this time with an illegal helmet visor. “But we got the ‘W’ and that’s all that matters.”

There are still some major issues for rookie coach Freddie Kitchens to address. Cleveland cut its penalties from Week 1 in half, dropping from a mind-boggling 18 to 9, but star defensive end Myles Garrett offset a career-high three sacks with five penalties — two for roughing.

Quarterback Baker Mayfield and the Browns’ offense isn’t hitting on all cylinders, and Kitchens is still searching for the right passing-running balance as he juggles play calling and other duties.

The Browns, though, avoided an 0-2 start that could have upended their season and made a brutal stretch ahead — Cleveland’s next five opponents are all 2-0 — even tougher.

“Consistency for us is the goal right now,” said Mayfield, who completed 19 of 35 passes for a misleading 325 yards. “That falls back on me. We are just scratching the surface.”

Kitchens seems to be trying too hard to make all his skill players happy, when he should probably be getting the ball more to Nick Chubb.

The second-year running back had 22 touches — 18 carries for 62 yards and a 19-yard TD, four receptions for 36 yards. But the Browns are often lined up with five receivers, and Kitchens put Mayfield in harm’s way by having him throw late in the game despite a three-score lead.

Garrett’s goal is to be NFL Defensive Player of the Year, and he’s the early leader.

With five sacks in two games, Garrett has set the tone for his season, but he might need to slow down a tad. He was twice flagged for late hits on Siemian, who suffered a season-ending ankle injury on the second penalty.

Both infractions were suspect, but the league is cracking down on hits to QBs and Garrett must avoid being labeled dirty or reckless.

Mayfield has been inaccurate and hesitant through two games. Now that teams have more tape to watch on him, Mayfield is being shown different defensive looks and he’s been slow to adjust.

He was off target on Cleveland’s first series, missing a wide-open Jarvis Landry on third down and wasted some other potential big plays by leaving the pocket early.

“He just missed some of the throws,” said Kitchens, who got a little defensive about his QB on a teleconference. “Some of the angles were off. Just overall, just missing throws. He is not going to make every throw. I have to do a better job of creating better throws for him.”

Tight end David Njoku suffered a concussion in the first half when Mayfield hung him out with a high pass and he was undercut. ... Chubb briefly left the game, but Kitchens said he only got the wind knocked out of him.

21.7 mph — That’s how fast Beckham was clocked running on his long TD, a speed that would warrant a traffic ticket in school zones.

The Browns passed their first prime-time test, but they’ll face a much bigger challenge this week against the defending NFC champion Los Angeles Rams on Sunday night.

Kitchens felt his team played with more “passion and not off emotion” against the Jets.

It was a small step forward for the Browns, who couldn’t afford to take another one sideways.