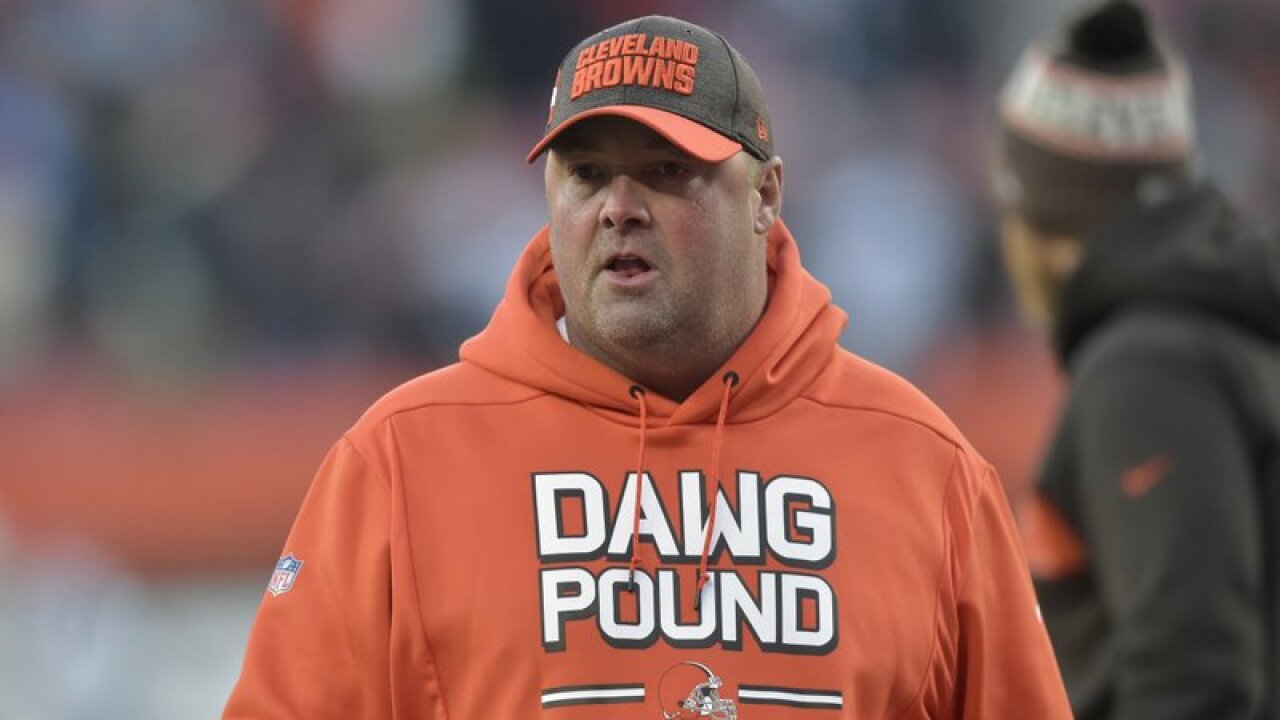 (Copyright 2020 The Associated Press. All rights reserved. This material may not be published, broadcast, rewritten or redistributed.)
In this Dec. 9, 2018, file photo, Cleveland Browns offensive coordinator Freddie Kitchens walks on the field after an NFL football game against the Carolina Panthers, in Cleveland. A person familiar with the decision says the Cleveland Browns are hiring Freddie Kitchens as their coach. Kitchens, who had a dazzling eight-week run as the team’s interim offensive coordinator, is finalizing his contract and will be named Cleveland’s ninth coach since 1999, said the person who spoke Wednesday, Jan. 9, 2019, to the Associated Press on condition of anonymity because the team is not commenting on the imminent hire. (AP Photo/David Richard, File

After staunchly defending the superstar wide receiver’s decision to skip nearly all of Cleveland’s voluntary practices since joining the team, Kitchens had a different tone Thursday when asked about Beckham’s nonattendance.

“I just want to see him,” Kitchens said when asked what he wants to see out of Beckham at next week’s mandatory minicamp.

What did Beckham miss while away the past three weeks?

“A lot,” Kitchens quipped. “The offense.”

Beckham, who was acquired March 12 in a blockbuster trade from the New York Giants, skipped all but one day of Cleveland’s voluntary practices (OTAs) over the past month.

Other than being at his introductory news conference on April 1 or his appearance two weeks ago at one of the 10 practice sessions, the 26-year-old Beckham has not been around.

So while Kitchens installed a new offense and quarterback Baker Mayfield threw passes to second- and third-stringers — Jarvis Landry has been held out of workouts with an unspecified injury — Beckham has been training in Los Angeles, dressing for the Met Gala in New York, attending the Formula One race in Monaco and getting a customized, orange Rolls Royce.

In the past, Kitchens defended Beckham’s decision, saying he was confident the three-time Pro Bowler receiver would stay in shape and be ready when the season starts.

Kitchens may still feel that way, but given the chance he didn’t express those sentiments this time, perhaps to send a message to Beckham or set a tone for next week’s workouts.

Beckham isn’t the only player who has missed practice, but he could have changed some of the outside perceptions about him being selfish by joining his new teammates and Kitchens, who has never been a head coach and is getting his first crack at the highest level.

Running back Duke Johnson has missed the entire offseason program after requesting a trade.

Kitchens said he expects Johnson to return next week.

“It’s mandatory,” Kitchens said. “He should be here.”

Kitchens is excited about having his full squad together soon.

“It’ll be nice to have everybody here and get them some work and get everybody ready to compete during training camp when we’re going to start forming the Cleveland Browns,” Kitchens said.

NOTES: Landry is not expected to practice next week, Kitchens said. Landry did not undergo any surgeries during the offseason and Kitchens said the decision to keep him out is “more precautionary than anything.” ... Mayfield did not speak to reporters, but is expected to have a media session during his youth football camp Saturday at Mayfield High School in Mayfield Village, Ohio.