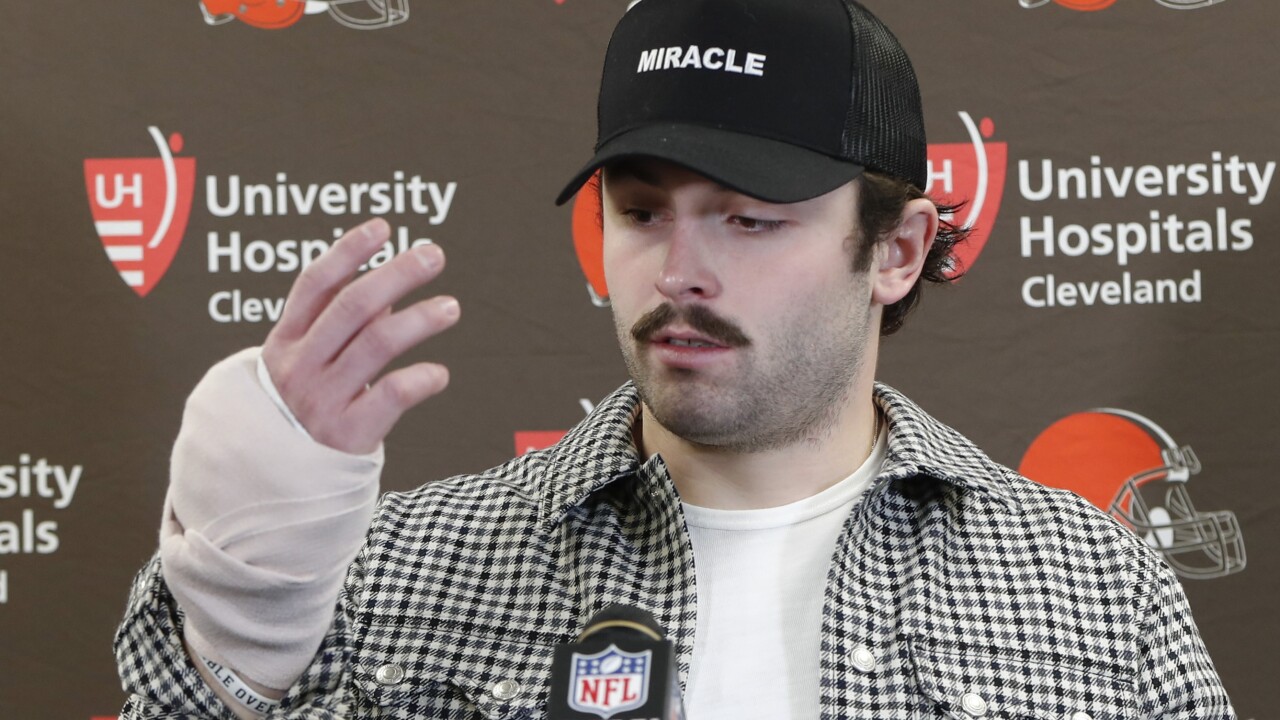 Mayfield played the second half of Sunday’s 20-13 loss to Pittsburgh with a badly bruised hand sustained after he smashed it on the facemask of Steelers linebacker Bud Dupree while throwing an incomplete pass just before halftime.

Mayfield’s hand was heavily wrapped and he didn’t throw at all during the portion of Wednesday’s practice open to reporters. Afterward, Mayfield stood at the podium with both hands tucked behind his back, hidden from sight and camera view.

Mayfield said he hasn’t thrown since Sunday’s loss, which pushed Cleveland’s playoff hopes to the fringes of extinction. However, the second-year QB said his throwing hand has improved with treatments and he expects to be on the field this week when the Browns (5-7) host the Cincinnati Bengals (1-11).

Before practice, coach Freddie Kitchens twice said Mayfield wouldn’t be limited, so it was something of a surprise when he stood and watched as backup Garrett Gilbert and practice squad QB Eric Dungey tossed passes to the team’s tight ends and running backs.

Mayfield said the plan is for him to throw Thursday and that he doesn’t need much time to be ready to play.

“If we communicate on the right depths and where we need to be, then I shouldn’t have a problem,” he said. “It’s all about timing and knowing that we’ve built chemistry and I need to put the ball where we talk about it and they need to have their depth and be there on time.”

On Cleveland’s final drive before halftime, Mayfield uncorked a nearly 70-yard pass toward wide receiver Odell Beckham Jr. that was incomplete before his hand slammed Dupree’s helmet on the follow-through. X-rays were negative and Mayfield played the second half while wearing a glove.

Mayfield had a costly fumble and threw an interception on his final attempt as the Browns had their three-game winning streak halted in their hyped rematch with the Steelers following the brawl between the teams 17 days earlier.

“I’d say if Bud Dupree was there just a millisecond earlier it could’ve been pretty bad,” he said. “But pretty fortunate.”

Mayfield said Sunday’s second half was the first time he played wearing a glove. While the glove — and some numbing medicine — didn’t adversely affect his throws, Mayfield said not having his bare hand on the ball is a significant adjustment.

“Yeah, normal grip to where you feel the ball, feel the touch and feel the spin of it when you release it,” he said.

Robinson sat out against the Steelers, and his replacement, Justin McCray, and the rest of the Browns’ offensive line struggled to protect Mayfield, who was sacked five times and under constant pressure. The No. 2 overall pick in 2014, Robinson has started 10 of Cleveland’s 12 games.

“Having Greg back should be great for us, “ Mayfield said. ”We trust obviously whoever we put in there, but Greg’s presence adds a different dynamic.”

Cleveland’s thin secondary also got a boost with the return of safety Eric Murray. He returned to practice after missing five games following knee surgery on Nov. 1.

Also, free safety Damarious Randall was back on the field after Kitchens benched him for disciplinary reasons and didn’t allow him to travel to the Pittsburgh game.

Randall said he was surprised by Kitchens’ decision, but he refused to divulge any details.

“It is what it is at this point and we’ve just kind of moved on from it,” he said. ““We handled everything internally and that’s as much as I can say about that.”

Kitchens expects Randall to be back against the Bengals.

“I trust Damarious is going to go out and prepare and play,” Kitchens said. “Everything’s the same. I have no problems with Damarious.”

NOTES: Starting center JC Tretter played through a knee injury Sunday and was kept out of practice along with starting right tackle Chris Hubbard (knee). ... Several Browns players expressed surprise at the team’s release of defensive end Chris Smith, whose girlfriend was killed in a roadside accident earlier this season. “Those things are hard, because you develop these relationships with these guys, with teammates and you just hate to see them go and you hate to see how the business is where they’re constantly bringing guys in or constantly letting guys go,” cornerback T.J. Carrie said. Kitchens said, “we will always be there to support Chris.”