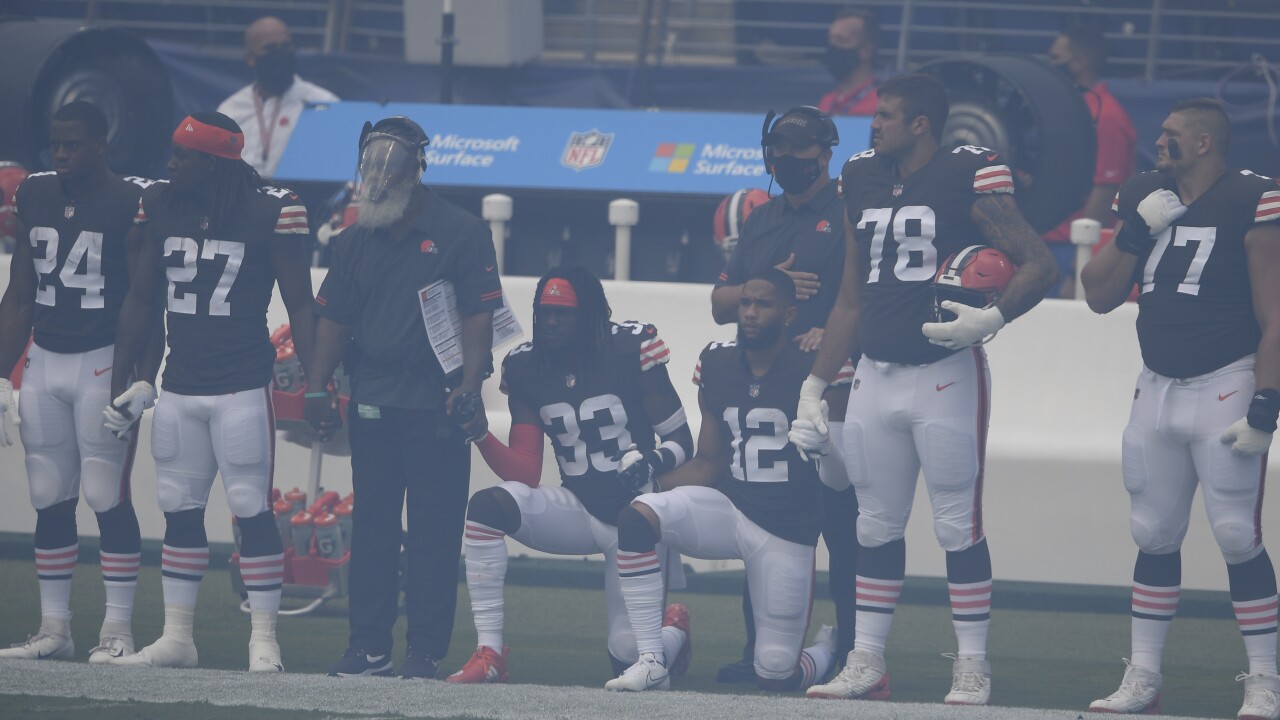 BALTIMORE — Three players on the Cleveland Browns took a knee during the national anthem ahead of Sunday’s game against the Baltimore ravens.

Myles Garrett, Ronnie Harrison, and KhaDarel Hodge all opted to kneel while the anthem played Sunday to protest social injustices, just a day after quarterback Baker Mayfield announced the reasons he would be reversing course and standing for the anthem.

Mayfield, who is a vocal advocate for social justice, said he made the decision to stand after having been shown “that a gesture such as kneeling will only create more division or discussion about the gesture, rather than be a solution towards our country’s problems at hand.”

Garrett said that his decision to kneel was in no way meant to be disrespectful.

“Just a message. No disrespect to anybody who has served, anybody who is in law enforcement or is serving right now. Anybody who has served before that I have known, I do not think they have taken it as a disrespectful thing, and it is not that. If we continue to do the same thing or we switch it up, that is something we will worry about next week,” Garrett said. “My decision to do that has no bearing on my game and it doesn’t bear on my conscience either. After that is done, I am in game mode.”

While Mayfield chose to stand for the anthem, he didn’t shy away from standing up for social justice—supporting his teammates’ decision to knee and bringing awareness to the case of Julius Jones, a man on death row fighting to prove his innocence in a 1999 murder.

“Like I said, I respect all of my teammates’ decisions. We talked about it, we had discussions and we are all on the same page. We are in this together in showing solidarity to try and unite instead of divide. It does not matter what decision any of our teammates make, that is just what I personally said and that is the way I wanted to say it. While we are on that topic, the name of had in the back of my helmet today was Julius Jones. A very sad story. A guy who is wrongfully incarcerated in the state of Oklahoma. I tried to represent him today for justice for Julius. I hope I spread that message and I continue to do so.”

Mayfield wrote a letter to Oklahoma Gov. Kevin Stitt and members of the Oklahoma Pardon and Parole Board in June, seeking the commutation of Jones.

While it’s noted that three Browns players chose to kneel Sunday, as players like center JC Tretter have said, the decision to kneel tends to find itself as the talking point rather than the reason why they choose to kneel.

“Too often, we get talking about who is kneeling and who is not kneeling and not talking about why we are kneeling. They are kneeling to bring awareness to social injustice and police brutality. Too often, we just talk about the action and not why we are doing this thing,” Tretter said. “Now, we have gotten to the point where you see a lot of clubs and their players working through kind of action items of how to make the situation better and improve. I think that is where the conversation should be talking about, not about what they are going to do or what they did but more of what they are going to do moving forward and not just sticking to what their actions were but we are going to continue to do to solve and help right these wrongs.”

RELATED: Baker Mayfield says he will stand for national anthem to show 'respect, love and unity to everybody involved'