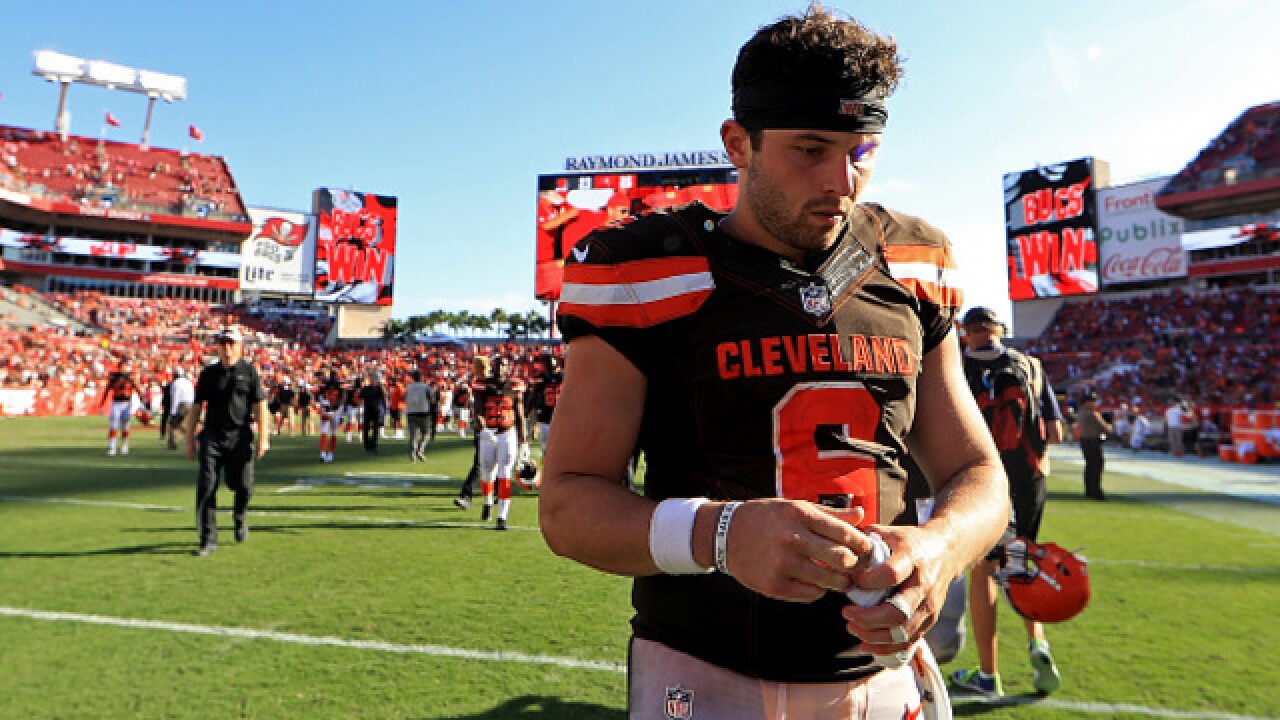 CLEVELAND — Cleveland Browns quarterback Baker Mayfield has recently taken to speaking out against police violence and racial injustice. Mayfield took his activism further, writing a letter Oklahoma Gov. Kevin Stitt and members of the Oklahoma Pardon and Parole Board, seeking the commutation of Julius Jones, a man on death row fighting to prove his innocence in a 1999 murder.

Jones was 19 years old at the time of his arrest. He was a student at Oklahoma University going for an engineering degree and working towards a basketball scholarship.

In the summer of 1999, a 45-year-old man named Paul Howell was shot and killed during a carjacking in Edmond, Oklahoma. Jones was the prime suspect in his death, despite his claims he was home playing games and eating dinner with his family.

Howell’s family was inside of his car when he was shot and killed, and described the suspect as a Black man wearing a stocking cap and a bandana across his face with “half an inch of hair” sticking out from the cap. Jones’ hair was shaved down at the time of the shooting.

Jones’ co-defendant, Christopher Jordan, is believed to have set Jones up for the crime. After pleading guilty, he served 15 years in prison and is now free. Jones was sentenced to the death penalty and 40 years.

While the DNA results from a bandana and a weapon found in the house have been used both as evidence of Jones’ guilt and his innocence, it was what took place during the trial that has caused celebrities and organizations—including John Legend, Kim Kardashian, Black Lives Matter, and most recently Mayfield— to speak up and fight for Jones’ commutation, stating that racial discrimination fueled the conviction of what they believe to be an innocent man.

In addition to claims of racially-fueled language from officers handling Jones’ case during the court proceedings, the state dismissed all prospective Black jurors but one. One of the 12 jurors who convicted Jones and sentenced him to death confessed that another juror described the trial as “a waste of time” and said that “they should just take the n***** out and shoot him behind the jail.”

Jones has maintained his innocence for nearly 20 years.

"As God is my witness, I was not involved in any way in the crimes that led to Howell being shot and killed," Jones said in his clemency report. "I have spent the past 20 years on death row for a crime I did not commit, did not witness and was not at."

Mayfield, who played football at Oklahoma University, wrote the letter on behalf of Jones a few weeks ago, asking for the pardon and parole board, as well as the governor, to review the commutation application with “fairness and compassion.”

Based on my personal review, the errors and shortcomings in Julius’ trial have been well-documented and are too numerous to be listed in this letter. The inconsistent (and unchallenged) testimony of Julius’ co-defendant, the obviously inexperienced and unmotivated defense team, and the eye-witness description of a shooter that clearly did not match Julius are by themselves enough to cast doubt on his guilt.

Beyond the obvious shortcomings of the trial, another issue that continues to weigh on me is the obvious racial bias that permeated Julius’ arrest, prosecution, and conviction. Every American is supposed to be guaranteed a fair and impartial trial. But when your arresting officer calls you the “n-word,” when a juror calls you the “n-word” and when all of this unfolds in the context of decades of death penalty convictions slanted against black men, it is impossible to conclude that Julius received fair and impartial treatment.

The Oklahomans I met are not racist; they are not mean-spirited, and they do not wish to participate in injustice in this day and age. That is why I am confident that when Oklahomans become aware of the facts surrounding Julius Jones and his conviction, they will demand that his sentence be commuted.

Mayfield joins other athletes to sign letters of support for Jones, including NBA stars Blake Griffin, Russell Westbrook, Trae Young and Buddy Hield. A petition demanding justice for Jones and his release from death row, and freedom from prison for time served, has been signed by nearly six million people.

To learn more about Jones’ case and the attempts to free him, click here.