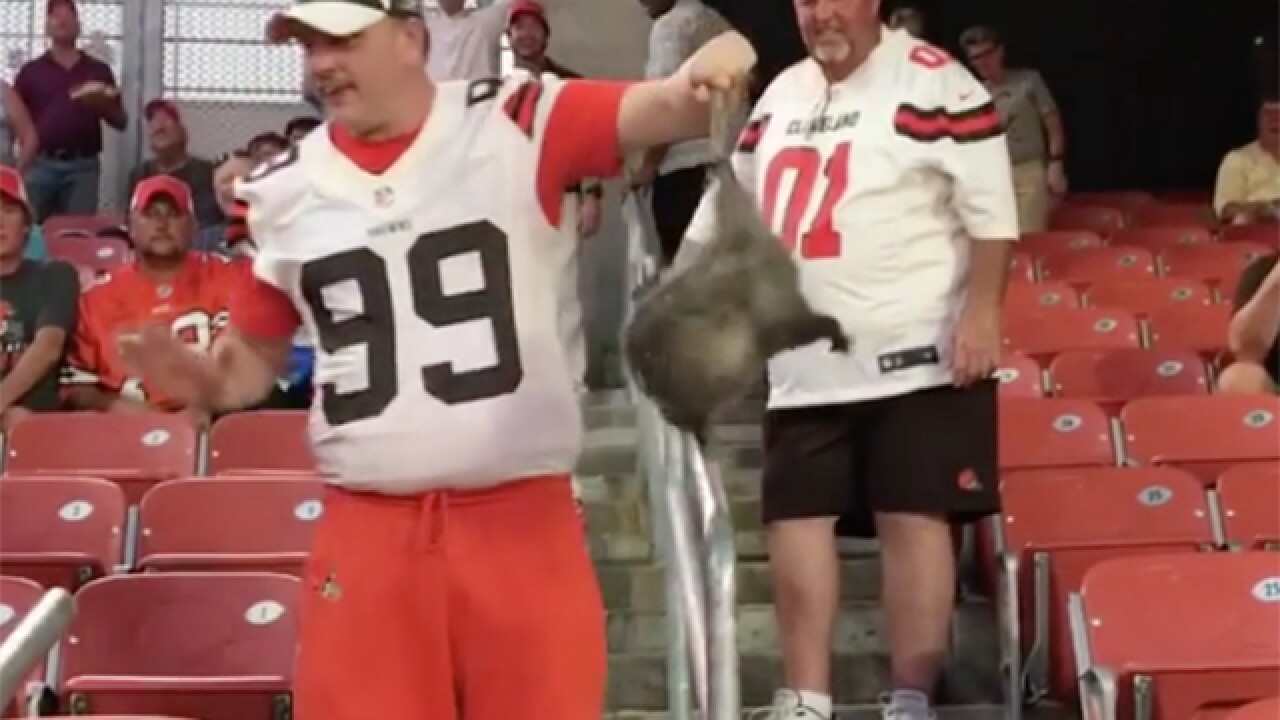 Copyright 2018 Scripps Media, Inc. All rights reserved. This material may not be published, broadcast, rewritten, or redistributed.
<p>Rally Possum moments before he's captured, which is absolutely 100 percent why the Browns won Thursday night. (Source: steve_bertolino on Instagram)</p>

The Browns won Thursday night – but was it Baker Mayfield’s 201 yards and the team's two touchdowns, or was it all thanks to #RallyPossum?

An opossum was first spotted loose in Section 101 at about 7:30 p.m. Minutes later, with hands as deft as Jarvis Landry’s, a fan sporting a number 99 jersey grabbed the waylaid marsupial by its tail and placed it gingerly in a box. It, apparently, was a sign of the victory to come.

Nbd, just a Browns fan catching a possum tonight at the stadium pic.twitter.com/MxMWFWh4jS

The Browns won the game, but the opossum may have won the internet Thursday night. The tweet from @BustedCoverage with the opossum capture on video had over 1.7 million views as of Friday morning, and the responses were amazing:

I got 99 problems but a possum ain't one! pic.twitter.com/HDKHAc0xUW

By Friday morning, "Rally Possum" even had its own t-shirt, because of course it does:

I told you Cleveland would have a shirt by 6 am pic.twitter.com/CYWRZy8oXO

So what happened to this mythical creature of gridiron legend after it's capture and cardboard incarceration? It was released humanely outside the FirstEnergy Stadium, according to a tweet from Rob McBurnett, senior communications manager for the Browns. "It's quite possom-ble it reached one of the @Browns @budlight Victory Fridges in time to celebrate the win #NYJvsCLE," he tweeted.

Was it a cursed opossum lurking in the stadium for the last two years, and capturing him finally lifted the curse?

Was the opossum actually a genie that granted Browns fans' wishes upon its capture?

Was it just a funny thing that happened? We may never know.

Editor's Note: Possum or Opossum? The marsupial native to North America is an opossum, while a slightly different creature native to Australia is written "possum." So, while the internet may refer to it as the Rally Possum, the actual animal is an opossum.