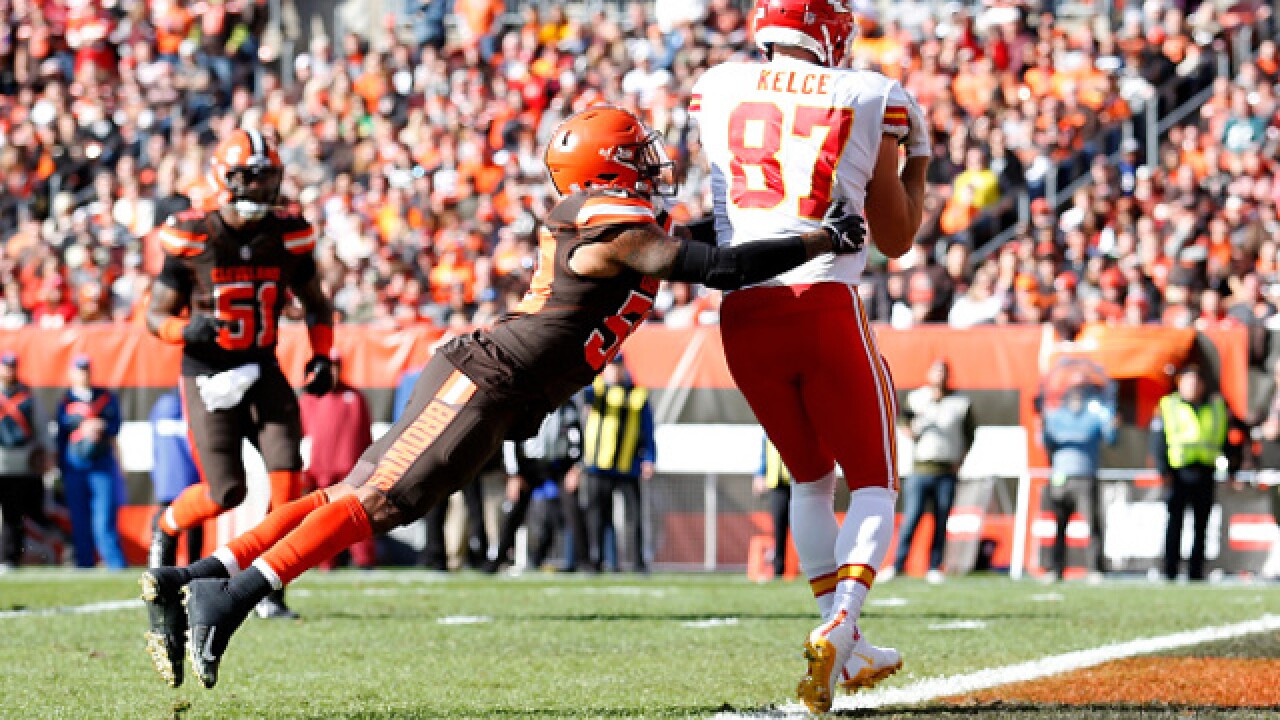 Image copyright 2018 Getty Images. All rights reserved. This material may not be published, broadcast, rewritten, or redistributed.
Kirk Irwin
<p>CLEVELAND, OH - NOVEMBER 04: Travis Kelce #87 of the Kansas City Chiefs catches a touchdown pass in front of Christian Kirksey #58 of the Cleveland Browns during the second quarter at FirstEnergy Stadium on November 4, 2018 in Cleveland, Ohio. (Photo by Kirk Irwin/Getty Images)</p>

Mahomes passed for 375 yards, threw three touchdown passes —  two to Travis Kelce  — and continued the best start by an NFL quarterback in 68 years as Kansas City’s impossible-to-handle offense kept rolling with a 37-21 win on Sunday over the Cleveland Browns, who played their first game since coach Hue Jackson’s firing.

Cleveland native Kareem Hunt  had two scoring runs and one receiving  for the Chiefs (8-1), who came in averaging 36.3 points with an offense overloaded with weapons for Mahomes.

The 23-year-old used all of them in winning his first pro matchup against Baker Mayfield and the Browns (2-6-1).

“It’s a lot of fun,” Mahomes said. “It makes my job a lot easier knowing that I can trust these guys are going to be in the right spot. They’re taking care of their business. They’re running the routes and making route adjustments on the fly just because they’ve looked at the film and know how to do those things.”

Mahomes and Mayfield didn’t match their epic college meeting in 2016, when they combined for more than 1,700 yards in offense. But the Chiefs put on another impressive offensive show with 499 total yards, averaging 8.6 per snap.

Browns defensive end Myles Garrett said preparing for the Chiefs is not like playing them.

“Their offense has a nice tempo and he gets the ball out of his hand pretty quick, so it’s hard to stop,” he said. “He spreads the ball around really well and everybody is getting touches. You don’t know who it’s going to go to next.”

In his second season, Mahomes, who made just one start as a rookie, already has 29 TD passes and 3,185 yards, the most by any QB through 10 games since 1950. He has passed for at least 300 yards in eight straight games.

Cleveland lost its fourth straight, but it looked better under interim coach Gregg Williams than it did with Jackson, fired on Monday after going 3-36-1 in two-plus seasons.

Mayfield threw two TD passes to Duke Johnson and finished 29 of 42 for 297 yards with one interception.

The Browns came in facing a monumental task in trying to slow Mahomes and an offense with speed, depth and no noticeable weaknesses.

Things got much tougher for Cleveland when starting cornerback Damarious Randall (groin) was scratched and E.J. Gaines (concussion) and rookie Denzel Ward (hip) both got hurt in the first half.

Kansas City scored a touchdown on its first three possessions and the Chiefs only had the ball for 11:29 in the first half as the Browns were able to control the clock.

The Chiefs picked up where they left off in the third quarter with Mahomes firing a 13-yard TD pass to Kelce, giving Kansas City a 28-15 lead.

Mahomes’ 11-yard TD pass to Kelce early in the second quarter gave the Chiefs a 14-3 lead, and with their offense firing on all cylinders, it appeared they might be on their way to an easy win.

But the Browns responded with a 75-yard drive capped by Nick Chubb’s 3-yard TD run. Williams, who showed early on he was going to take risks by going for it on fourth down, went for 2 but the conversion failed. Cleveland didn’t convert three times on 2-point tries.

Mayfield was checked for a concussion and cleared after a questionable hit late in the third quarter.

Mayfield was backpedaling and  being wrapped up by Chris Jones  when the rookie QB was struck in the helmet by Chiefs defensive back Ron Parker, who came in late but was not penalized. The NFL’s on-site medical spotter called down and Mayfield had to leave the game to be checked for a head injury.

The Chiefs won the coin toss for the ninth consecutive week and elected to defer.

A Cleveland native, Hunt bought more than 100 tickets for the game and had them given to the players and coaches at his high school alma mater.

Browns rookie left tackle Desmond Harrison sat out with an unspecified illness and was replaced by Greg Robinson, a former No. 2 overall pick who made his first start.